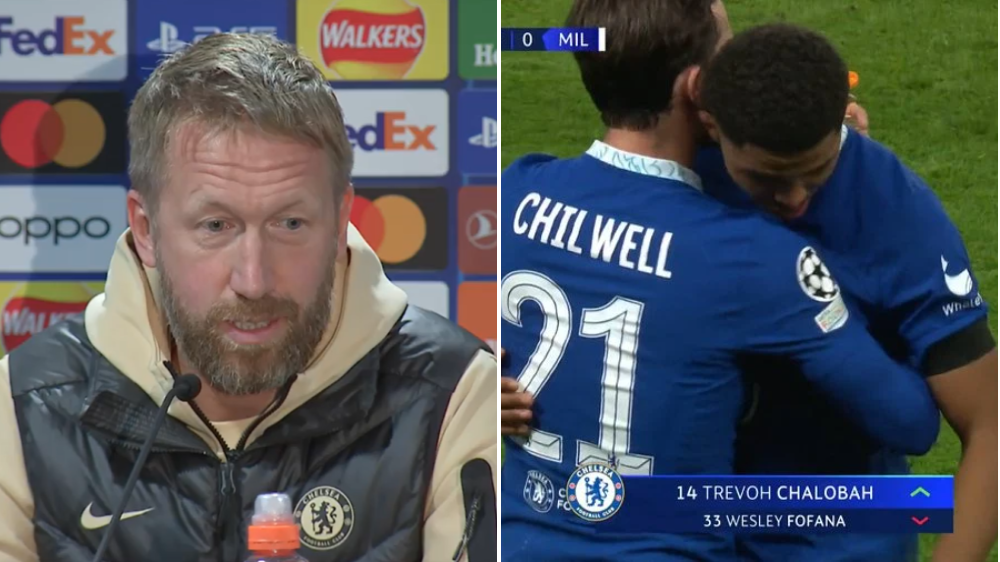 Graham Potter admitted he was ‘concerned’ after Chelsea defender Wesley Fofana appeared to be in tears as he hobbled off during the Champions League victory over AC Milan.

Fofana, who completed a £70m move from Leicester City over the summer, scored his first Chelsea goal to put the Blues ahead on Wednesday night.

But the French defender was forced off before half-time after an innocuous collision with AC Milan forward Rafael Leao.

Fofana tried to carry on after the initial challenge but soon signalled to Chelsea’s bench that he had to come off and was replaced by Trevoh Chalobah.

As he left the pitch, Fofana cut a despondent figure and received a warm embrace from Ben Chilwell, who has battled back from his own injury problems recently.

The scenes were especially concerning for Chelsea fans as Fofana spent almost nine months on the sidelines while he was at Leicester after breaking his leg in a pre-season friendly, and had complained about injury issues during his final few weeks at the King Power Stadium.

Asked for an update on Fofana after Chelsea’s 3-0 win over Milan, Potter said: ‘We’ll have to scan it tomorrow and see how it is.

‘I wouldn’t want to speculate on it now but we’re concerned and hope for the best.

‘We’ll support him but we don’t know yet, we’ll get the scan results tomorrow. Fingers crossed. There’s nothing to report at the moment but it was the one disappointing thing of the evening.’

Fofana was seen leaving Stamford Bridge on crutches and his injury somewhat overshadowed an impressive Chelsea win in west London.

The Blues outclassed Serie A giants AC Milan to record their first Champions League win of the season and second win in three games under Potter.

The Blues boss added: ‘It was a good night for us. We needed to play well. The attitude and application of the players was fantastic. It was a really important win for us.

‘I thought we started off a bit nervous for about five minutes. It was just a result of us wanting to do so well. But then you saw the appetite of the players.

Chelsea, currently fifth in the Premier League and second in Champions League Group E, return to domestic action on Saturday against Wolves.