Georginio Wijnaldum says he will “miss” his Liverpool team-mates and fans after playing what is set to be his final game for the club.

An emotional Wijnaldum was given a guard of honour and a big presentation following Liverpool’s 2-0 win over Crystal Palace on Sunday which guaranteed them a spot in next season’s Champions League.

Wijnaldum’s contract at the club is set to expire in the summer and so far the Dutch international has not agreed to a new deal in order to extend his stay on Merseyside.

The 30-year-old told Sky Sports after the final whistle that he will be looking to move on as a free agent in the summer but has vowed to publicly explain his decision.

“I’m fighting against my tears right now,” he told Sky Sports after Liverpool’s win over Crystal Palace. “I’ve said that the people in Liverpool and the club, my team-mates, have shown me love during the five years, and I will miss them.

“I hoped to play many more years for the club but unfortunately things went different, I think everyone knows in football that anything can happen but the situation right now is that on July 1st I’m not a Liverpool player anymore. 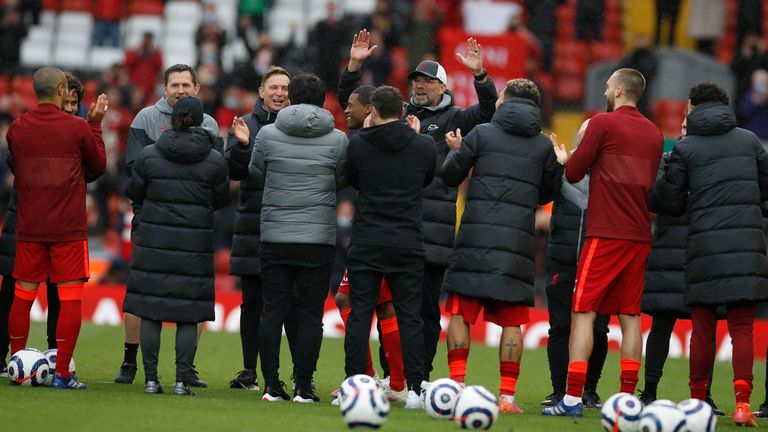 “As it looks right now this is my last game but what I just said is that in football anything can happen.

“We will see what I will do in the next couple of weeks, I will rest a little bit and then go to the national team and then I have to look when is time to do my story about how everything went, because I think the fans deserve to know the story behind it, and then we will see from there.”

The midfielder was subject of transfer interest from Barcelona over the past year, with current boss Ronald Koeman keen to bring his countryman to the Camp Nou.

The two have a close relationship having worked together during Koeman’s tenure as Netherlands boss, with Wijnaldum playing a pivotal role as the Oranje reached the Nations League final in 2019.