Manchester United legend Gary Neville was not able to resist the opportunity to aim a dig at Barcelona on Twitter, who are causing his former club several issues. The Red Devils are keen to sign Frenkie de Jong this summer, who is reportedly waiting for a pay-out from the La Liga side.

De Jong was made a top target by Erik ten Hag upon his arrival at Old Trafford, with the Dutchman keen to reunite with the midfielder following their time together at Ajax. A fee in the region of £63million is believed to have been agreed with Barca for the 25-year-old.

However, it is reported that De Jong is not keen on the move and digging his heels in at the Camp Nou because he is owed money by the club, which are keen to offload him. Once he is paid said amount though, it is felt a deal may be more possible.

But Barca have not addressed that issue, instead turning their attention to summer signings. Following the Catalan club’s announcement of Jules Kounde from Sevilla, Neville tweeted: “Does he know he doesn’t get paid his full wages if they want rid of him?” 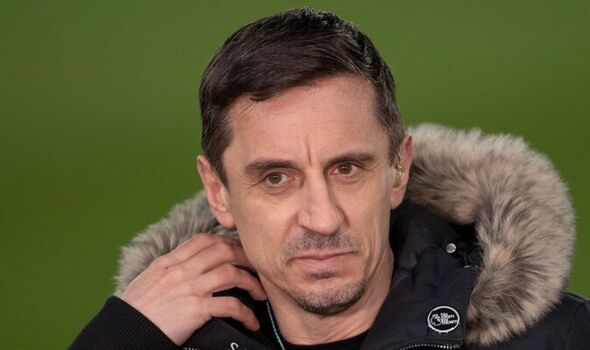 One of Neville’s followers then responded by asking whether his anger towards Barca is purely fuelled by his desire for the Red Devils to sign De Jong, which he denied. The former right-back said: “I actually don’t care if he signs for United or not!

“However, it has highlighted a situation I’ve always been passionate about which is employers/clubs taking the p*** out of workers/players and not paying them their due money! Barca are a disgrace to their name.” 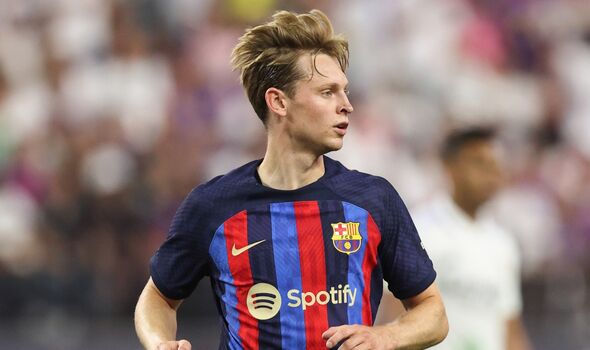 Following the arrival of Robert Lewandowski, the La Liga side hijacked Chelsea’s move for Kounde, the second time that they have prised a player away from Stamford Bridge this summer. They previously submitted a bid in the eleventh hour for Leeds winger Raphinha, who was vocal about his desire to move to the Spanish side previously.

United are pushing for their De Jong conundrum to be solved before the start of the season, with his absence plus issues surrounding Cristiano Ronaldo overshadowing what is supposed to be a fresh start for the club under Ten Hag.

The arrivals of Christian Eriksen, Tyrell Malacia and Lisandro Martinez will have shaken up the United dressing rooms, though the trio aren’t the sign of intent from the club that many supporters were hoping for after last season’s embarrassment under Ole Gunnar Solskjaer and Ralf Rangnick.