Arsenal: Is the pressure growing on Arteta?

Gary Neville has raised concerns over the emergence of a “little mafia” at Arsenal – what he describes as a select group of players failing to play for their manager Mikel Arteta. The Sky Sports pundit conceded that he found it difficult to digest the manner of the Gunners’ 3-0 defeat to Liverpool last weekend, a performance that throws Arteta’s long-term plan into serious question.

Although level at the break, Arsenal failed to lay a glove on the Reds who romped to victory in the second half courtesy of a brace from Diogo Jota and one from Mohamed Salah.

Neville was particularly disappointed with the attitude and work ethic of Arsenal’s midfield and attack made up of Dani Ceballos, Thomas Partey, Martin Odegaard, Pierre-Emerick Aubameyang, Nicolas Pepe and Alexandre Lacazette.

While Odegaard was cut some slack, the other five were labelled “a joke” as Neville suggested there were signs of a serious disconnect between the players and Arteta. 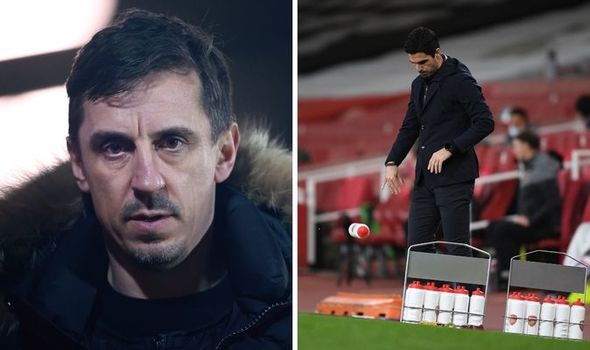 “I was really uncomfortable with what I saw. There have been a number of the times in the past few years where we’ve been doing Monday Night Football that my anger has sort of emerged and grown over the couple of days since the game.

“It happens very rarely. I remember QPR, in the early days of Monday Night Football, had a team I really didn’t like. I think it was Sunderland once where I thought, ‘there’s something not right there’, there are a couple of Chelsea performances where I thought they were turning on the manager at a certain point.

“I have to say, coming out of Saturday, we don’t know what goes on behind the scenes at Arsenal but there were a few of those players on the front part of the pitch, it looked like a little mafia.

“It looked like a little group of players who weren’t comfortable like there was a disconnect between them and the manager.”

Arsenal made huge strides under Arteta last season after guiding them to FA Cup glory but they currently sit 10th in the Premier League table.

Failure to win the Europa League would put the Spaniard’s position under serious threat given the damaging implications on recruitment and spending power heading into next season.

“The shape under Mikel Arteta has been really good,” Neville added, in defence of Arteta. “That back four pushes up to a really good line, they have a compact 30-35 metres always between them.

“Actually that wasn’t too different on Saturday, but what was really different was the effort, or lack of it, of that front six.

“I’m going to say all six. Odegaard, a few times he did try and put a little bit of a press on but he was on his own. The rest of them, I’d go as far as to say they were a joke.

“The lack of energy. Chambers is trying to get [Nicolas] Pepe forward, pointing at him. Calum Chambers, who is an honest kid, trying to get someone to work forward, he’s got the wide player, [Andy] Robertson.

“He’s giving it, ‘what do you want me to do?’, well he knows what to do. He wants to go forward, press forward and go and win the ball back off Liverpool.

“All the way through the first half I was watching this and getting more and more uncomfortable with it.

“At half-time you start to question yourself a little bit because you think hang on, it’s Liverpool, they’re a good team, it’s 0-0 and they’re still in the game. They could come out in the second half and it could look like good tactics.

“But Mikel Arteta, when he said he was shocked, I think he’ll have been shocked at the lack of application he saw from the front part of his team against the ball.” 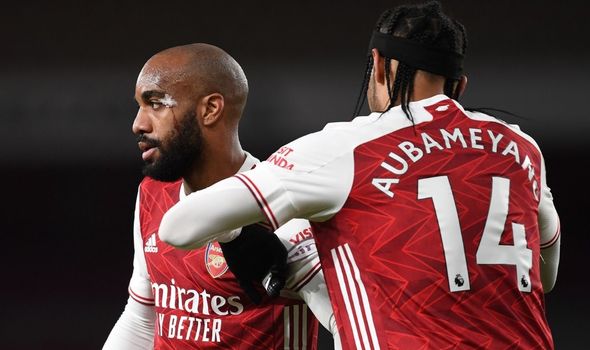 While Liverpool appear to have finally turned the corner, they were still far from full strength at the Emirates Stadium. Neville is adamant that Arsenal should have gone at the Reds following their timid and toothless display on home soil.

“I said in the second half, me and Martin Tyler could’ve played centre-back for Liverpool. They were really comfortable but they never laid a finger on them, they were under no pressure and it was embarrassing.

“It was a really bad day. I came away from it thinking, ‘it was a dark moment, that’. Like a crossroads moment, a moment where it feels like more than a 3-0 defeat against Liverpool which at the start of the season you’d say, ‘so what’.

“I think Mikel Arteta will have come away from that game thinking, ‘it’s me or them’.”