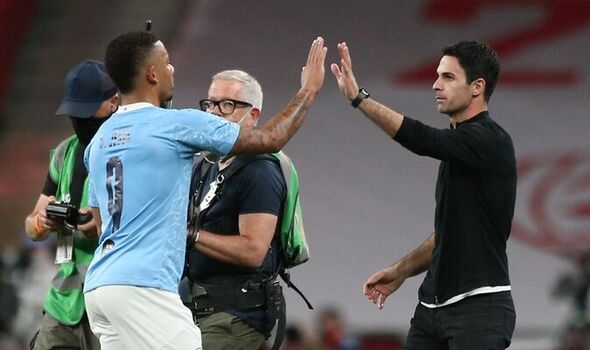 Manchester City centre-forward Gabriel Jesus and his representatives have decided they will not completely rule out a transfer to Arsenal if the club fail to secure Champions League football, according to reports. There is now concern in north London that the Gunners will not be able to attract their top targets if they miss out on a top-four finish, as expected, following the 2-0 defeat to Newcastle on Monday night.

Arsenal had remained on track to secure fourth ahead of Tottenham before their 3-0 humbling against their rivals a week ago.

It was a result that totally flipped the balance and saw Spurs gain the momentum as Antonio Conte’s side followed up their north London derby victory with a 1-0 win over Burnley.

Now Arsenal need a miracle to secure the return of Champions League football. They must beat Everton on Sunday and hope that bottom-place Norwich somehow pull off a scalp against Spurs.

Yet it’s not all doom and gloom for the Gunners with The Sun now reporting that Jesus and his team are still not ruling out a move to the Emirates, even if Arsenal are playing Europa League football come the start of next season.

Mikel Arteta knows the Brazilian well from his time working at Manchester City as Pep Guardiola’s No 2 and that could work in Arsenal’s favour.

City are set to offload their frontman this summer following the arrival of Erling Haaland with Jesus out of contract in 2023.

Jesus’ agent Marcelo Pettinati, recently admitted they were considering a move to Arsenal while warning the Gunners that there were plenty of other suitors in the running.

“We had talks with Arsenal about Gabriel Jesus, we like the project – it’s a possibility we’re discussing,” Pettinati told Fabrizio Romano.

And if some of those clubs are able to offer Champions League football, Arsenal may have their work cut out trying to twist Jesus’ arm.

Yet they do reportedly boast an advantage with the 25-year-old seemingly keen to remain in the Premier League after over five years with City.

As it stands, no other English clubs have entered the running – although that could soon change at the end of the campaign.

Tottenham had previously been offered Jesus in part-exchange for Harry Kane but Spurs politely declined.

The centre-forward wants to play regularly to consolidate his place in Brazil’s World Cup squad ahead of November’s tournament in Qatar and Arsenal would be happy to offer him assurances of game time.

Arteta and Edu do have a number of other forwards on their radar in case a move for Jesus fails to materialise.