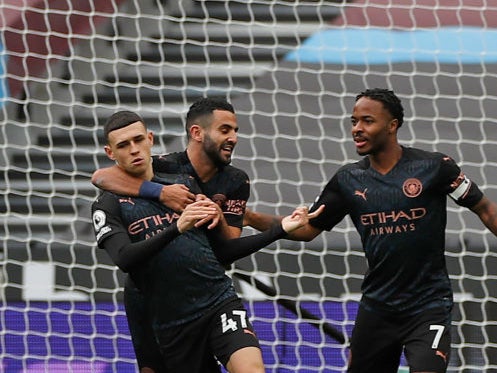 West Ham 1-1 Manchester City:  Pep Guardiola’s side have eight points from their opening five games – their lowest total since 2014

Fulham picked up their first point of the campaign against Sheffield United last time out, and the performance of Ademola Lookman was particularly encouraging.

Palace, meanwhile, sat back for 90 minutes against Brighton having taken an early lead, and then conceded a last-minute equaliser. Roy Hodgson’s side had just one shot – Wilfried Zaha’s penalty – so there are understandable concerns about what many perceive to be an overly negative approach.

Onto the second game of the day now. Fulham host Crystal Palace, hoping to move off the bottom of the table. Here are the teams:

Declan Rice speaks to BT Sport: “A great point. In the first half we were excellent. We nullified their main players. In the second half we started a bit sloppy, a bit heavy-legged. They’ve got so many options to pass to, and it doesn’t help when they bring De Bruyne on with 20 minutes to go. I think the last four of five teams they’ve played here they’ve scored four or five every time. I think we’ve found a formation that suits our players. We’re working hard for each other and that’s what West Ham players expect.”

City’s players look frustrated as they walk off. It’s more points dropped for Guardiola’s side, even if their rivals have looked equally vulnerable so far this season.

West Ham will be content with another draw in what was a more resolute display than last week’s against Tottenham.

That’s it! West Ham hold on after a much-improved City performance in the second half. Substitutes Foden and De Bruyne changed things for the visitors, but it’s not enough for the win.

Close! Gundogan plays in Mahrez and the Algerian drives towards goal before getting a shot off from a tight angle. Fabianski manages to push it onto the outside of the post.

Balbuena, for some reason charging out of defence and into City’s half, is booked for sliding in on Dias and getting nowhere near the ball.

There’ll be three minutes of added time. City are determined to find a winner here.