When Frank Lampard took his Chelsea team to Anfield in an attempt to spoil Liverpool’s title celebrations, the Blues boss might have been tapped into some of the emotion he felt from their rivalry when he was a player. And once the opportunity arose, Lampard let it all out in one foul-mouthed rant in the direction of Jurgen Klopp’s bench.

Some called the incident unsavoury due to the language used by the London-born manager, while others sensed it was justified after Liverpool’s actions in the dugout. But if there were any doubts about Lampard’s ability to mix it with his more experienced peers, this exchange put them to bed.

On the night of July 23, 2020, Liverpool were in party mode. Klopp’s men had just won the Premier League for the first time and with it had ended 30 years of hurt for their passionate and loyal fanbase. Naturally, there was an air of confidence snd swagger in the way the Reds passed the ball around.

They picked apart Chelsea’s defence at will and carved open the backline to take a 3-1 lead into half time, with Olivier Giroud’s goal giving the Blues a glimmer of hope after Naby Keita, Trent Alexander-Arnold and Georginio Wijnaldum scored for the hosts. 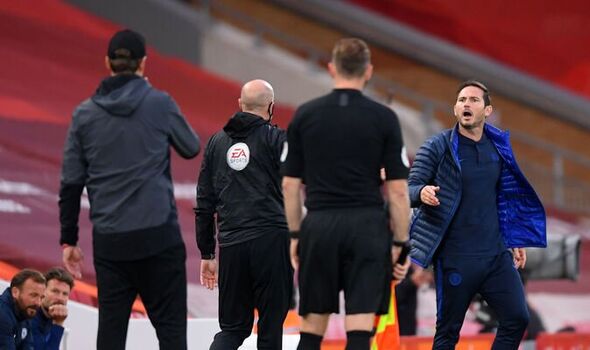 During the game, Lampard had lambasted the decision to award Liverpool a free-kick which Alexander-Arnold successfully dispatched. And after some comments from the opposition bench, a war of words broke out with the ex-Chelsea boss telling Klopp to “f*** off” after defending his staff’s actions. Of course, it would be Klopp who had the last laugh as his side survived a Chelsea fightback courtesy of goals from Tammy Abraham and Christian Pulisic in the second half with a fifth goal from Alex Oxlade-Chamberlain to seal the points.

Despite appearing to resolve the issue on the touchline, Lampard was still visibly annoyed by what had transpired — although he made clear the issue was not with Klopp. “To be honest, I have seen the video and I was there. In terms of the language I used, I do regret that,” he told reporters.

“There were a lot of things that were ongoing and on the bench … I’ve got no problem with Jurgen Klopp, he’s managed this team and it’s fantastic. Some of the bench, it’s a fine line between when you are winning – and they’ve won the league, fair play to Liverpool Football Club – but also don’t get too arrogant with it.”

Klopp was not about to lie down and accept such a label of his team, insisting: “We are not ‘arrogant’. Frank was in a really competitive mood, I respect that a lot. For me, after the game, it’s completely over. He has to learn to finish speaking about it after the final whistle, and he didn’t do that.”

Things look rather different for both sides two years later, with Liverpool narrowly missing out on the title last season and Chelsea taking the Champions League in 2020-21, only five months after Lampard’s departure. And perhaps with Thomas Tuchel now in the dugout, things are expected to be a touch calmer when the two sides meet this season.

But if both are challenging for the Premier League title as expected, there can be no guarantees the rivalry will not reignite on the pitch — and maybe on the touchline too.