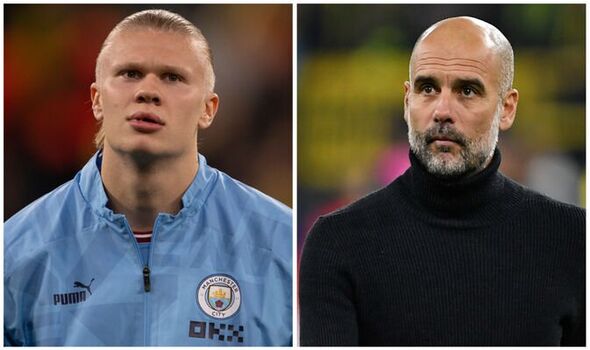 Fantasy Premier League managers have been left panicking about the state of their teams after learning of Erling Haaland’s absence from Manchester City’s squad with Leicester City on Saturday. The Norwegian superstar has been ruled out with an injury for the first time this season, leaving FPL bosses with an anxious wait to see how their teams fare without his goalscoring exploits.

The 22-year-old has featured in every Premier League game this season and has taken the top flight by storm, scoring 17 goals in just 11 appearances at a rate of a goal every 54 minutes.

Haaland, whose value has increased to £12.2m in the FPL game after seeing his ownership rise to 81 per cent, is the top-scoring player with 117 points this season, some 35 more than the next-highest Harry Kane (82), who is valued at £11.5m.

But the Norwegian talisman has been ruled out of City’s starting XI for their clash against Leicester after being rated as a fitness doubt for the clash by Guardiola on Friday, with the striker facing a race against time to make the squad. That has caused havoc for the 8.9million managers who own him, with a large portioning even captaining Haaland thinking he would play at least some part.

Haaland was substituted at half-time by the Catalan coach during their goalless Champions League draw with Borussia Dortmund and it later emerged Haaland had picked up a foot injury against his former club, with Guardiola admitting he faced a race against time to prove his fitness.

“He feels better, but we train this afternoon, and we will assess in these few hours,” said Guardiola. “We will see how he feels. After we will decide – I will know it in two hours if he can play.”

However, reports from leaked team news emerged on Saturday morning suggesting Haaland would not be included in their 20-man squad and that has proven to be the case, with Julian Alvarez making only his second start since his £18million move from River Plate.

Managers took to Twitter to vent their frustration, with one user, @lelewing, writing: “I’ve been standing strong all season by not putting Haaland into my #FantasyFootball team, I’m bottom of most leagues. Last week I gave in to the trend and made it work to get him in the squad. He’s now injured for the first time this season and not starting.”

Another user, @FPL_Dinlo, said: “No Haaland, no Foden.. be lucky if I finish in top 1m this season…” @nickyblinders echoed their thoughts, tweeting: “If it’s not Haaland it’s Foden, I hate FPL.”

@Calummacfarland tweeted: “Why didn’t Guardiola just be upfront and say Haaland wasn’t going to play, let my FPL down.”

But @Shaun_Best believes Haaland’s absence will show which managers are sharpest: “Top managers don’t blink making the tough decisions. That’s why I took Haaland out of my #FPL team a whole 24 hours ago. One step ahead of Pep. Nerves of steel.”