Manchester: The Premier League returns to action with both Arsenal and Chelsea facing tests against teams managed by their former title winning heroes.

The season’s opener on Friday (Saturday AEST) sees a strengthened Arsenal travelling south of the Thames to take on a Crystal Palace side managed by ex-Gunner Patrick Vieira.

Arsenal manager Mikel Arteta has had a very positive off-season with some impressive new signings, giving real hope that the Spaniard now has the talent needed to break back into the top four.

Brazil striker Gabriel Jesus and Ukraine’s Oleksandr Zinchenko have been brought in from Manchester City and Fabio Vieira from Porto should provide another option in an exciting young midfield.

But an away game at Palace is by no means a comfortable start for Arteta’s side. 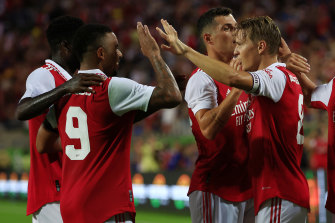 Gabriel Jesus (second left) will be one of the focal points of a new-look Arsenal side who open the Premier League season against London rivals Crystal Palace.Credit:Getty

Frenchman Vieira, who won three Premier League titles with Arsenal as a player, made a strong start to his reign at Selhurst Park guiding the Eagles to a solid 12th-place finish.

Vieira masterminded a 3-0 win over his former side in April, one of the defeats which cost the Gunners a place in the Champions League.

Chelsea also have a recent defeat to keep them grounded when they step out on the field at Goodison Park against old boy Lampard’s side.

Everton beat Chelsea 1-0 when they teams met on Merseyside in May with Brazilian Richarlison scoring the goal that helped secure top-flight survival.

Richarlison has, however, since moved to Tottenham and Everton’s lack of forward firepower has yet to be addressed in the transfer market, which remains open until the end of the month.

Champions Manchester City begin their title defence in the capital where David Moyes’ West Ham are looking to continue their progress after an encouraging seventh place finish last season.

City are likely to feature their new signing Erling Haaland in attack and the Norwegian will be hoping to put aside his disappointing display in the Community Shield loss to Liverpool last week.

Liverpool, who won that curtain raiser 3-1, are also in London and will expect to make a winning start against promoted Fulham.

New signing Darwin Nunez scored against City and could line up against Marco Silva’s side. 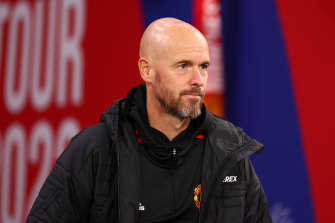 New Manchester United boss Erik ten Hag, pictured in Melbourne last month, has his work cut out for him at Old Trafford.Credit:Getty Images

Last season was a long nightmare for Manchester United but the 20-time champions are hoping that former Ajax boss Erik ten Hag can get off to a winning start to his time at Old Trafford against Brighton on Sunday.

United have used Anthony Martial as their central striker in pre-season, but he is doubtful for the game against Graham Potter’s side and that could mean a start for Cristiano Ronaldo despite his reported desire for a transfer.

Former European champions Nottingham Forest are back in the Premier League after a 23-year absence and mark their return with a difficult test at Newcastle United who enjoyed a fine second half to last season.

Antonio Conte has made some useful additions to his Spurs side, which finished fourth last term and will expect three points from the visit of Southampton.

The fixtures (all times AEST)
Saturday 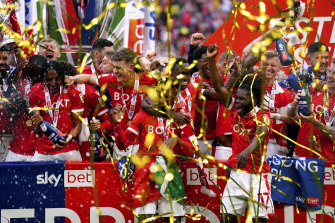 Two-time European champions Nottingham Forest are back in the Premier League for the first time this century.Credit:PA 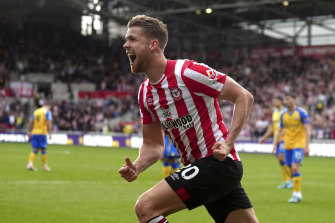