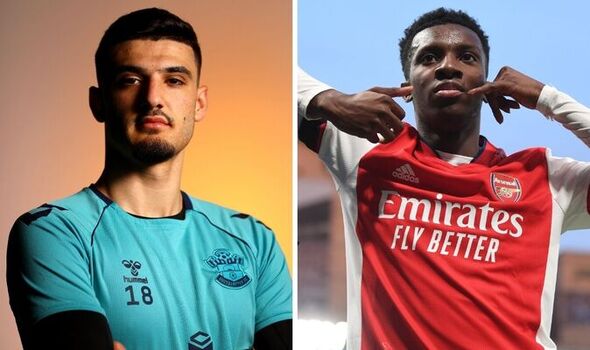 Manchester United have reportedly started talks over a deal for an unnamed young, Premier League striker with chief negotiator Matt Judge already working on the transfer. While the identity of the forward remains unknown, Express Sport has assessed five potential targets that may have fallen under consideration to the United hierarchy.

Given Broja is only 20, it feels like he is the name currently under discussion.

The Albanian has taken to senior football in the Premier League like a duck to water and it would be easy to see why United may possibly be interested.

Broja has scored eight goals in 30 matches to date so far this season while on loan at Southampton.

But it was an impressive week in which he tormented both United and Tottenham which really showed his quality.

This is where things start to get tricky. Richarlison at 24, is technically no longer young.

But with the list of ‘young strikers’ in the Premier League of extremely limited quality, you have to wonder whether United’s unknown target may be slightly older than expected.

We know Richarlison is one of the names United are looking at but there would be huge doubts as to whether he has the quality to become the club’s main man in attack.

Not only that but Everton could demand a blockbuster fee, providing they stay afloat in the Premier League.

Richarlison is thought to be keen on exploring a new challenge but as of now, we don’t know how committed United are to signing the Brazilian.

Similarly to his Everton team-mate, Calvert-Lewin is slightly older than ‘young’ at the age of 25.

The England international has endured a season to forget due to injury and his stock has plummeted as a result.

However, last season he did show signs of pushing Harry Kane for his spot in Gareth Southgate’s Three Lions side with his excellent goalscoring form.

Calvert-Lewin can hold the ball up but also play in behind and his skill set makes him an attractive option for any Premier League club, particularly as a homegrown player.

Toney is also a homegrown player but he is the oldest of the lot at 26.

That’s still young in comparison to United’s current crop of strikers, however.

The former Peterborough man has hit 12 Premier League goals so far to date on his top-flight debut season and there is certainly room for development.

He may not be on United’s shortlist of options but he is certainly one of the more attractive strikers in the long list of forwards.

Finally, Nketiah’s availability makes him an interesting option given his contract with Arsenal expires at the end of June.

His two-goal heroics for the Gunners in midweek in the 4-2 win at Chelsea firmly put his name in the shop window.

Nketiah could make a smart signing to plug a gap in Manchester United’s squad.

He is only going to improve and having taken up a squad role at Arsenal, there’s every chance he may accept a similar position for a club with the stature of United, despite his determination to play regularly.