He was the last player to leave the field. Had it been a more sentimental character, that would be unsurprising, but Fernandinho has forged his reputation as Manchester City’s arch-pragmatist. He announced his own departure, catching Pep Guardiola by surprise by simply stating a fact, shorn of emotion or hyperbole.

But after his final Champions League game at the Etihad Stadium concluded, Fernandinho had lingered longer on the pitch than anyone else. He will be on its turf again, but not in this competition. His City career could finish with the Brazilian lifting the trophy they want most in Paris, or with Fernandinho, like Yaya Toure and Vincent Kompany, David Silva and Sergio Aguero before him, exiting a Premier League great who lacked the ultimate validation on the European stage. They may all end up unfulfilled in the Champions League: perhaps Fernandinho more than most, given that he probably ought to have started last season’s final after an outstanding display in the semi-finals and as Guardiola erred by dispensing a defensive midfielder against Chelsea.

Twelve months on, he was back in the last four again. Perhaps Fernandinho was the last man to head to the dressing rooms simply because ageing limbs had tired. He has been an all-action figure for City, his stamina often belying his years, his capacity to do the work of two men making attacking systems work, but his was a thankless task.

As John Stones limped off, the gamble on his fitness backfiring after 35 minutes, enter Fernandinho. Not in his familiar position at the base of the midfield, but at right-back. Guardiola, who has managed him for six seasons, reckons the veteran played there once in 2017-18 but that was once in his first 247 appearances for the Catalan. At best, he was City’s fourth-choice right-back, after the injured Kyle Walker, the suspended Joao Cancelo and Stones. Nor was this just any assignment: his immediate opponent was Vinicius Junior, the roadrunner 15 years his junior, the scourge of Chelsea and one of the best left wingers in the world. Fernandinho’s 37th birthday comes in the next couple of weeks and he is closer in age to Guardiola than Vinicius Junior. Good luck with that one.

But for a couple of minutes, it looked a masterstroke. City went 3-1 up when Fernandinho charged ahead of Vinicius Junior to win the ball, surged past Riyad Mahrez to cross and found Phil Foden, who had the simple task of heading in. 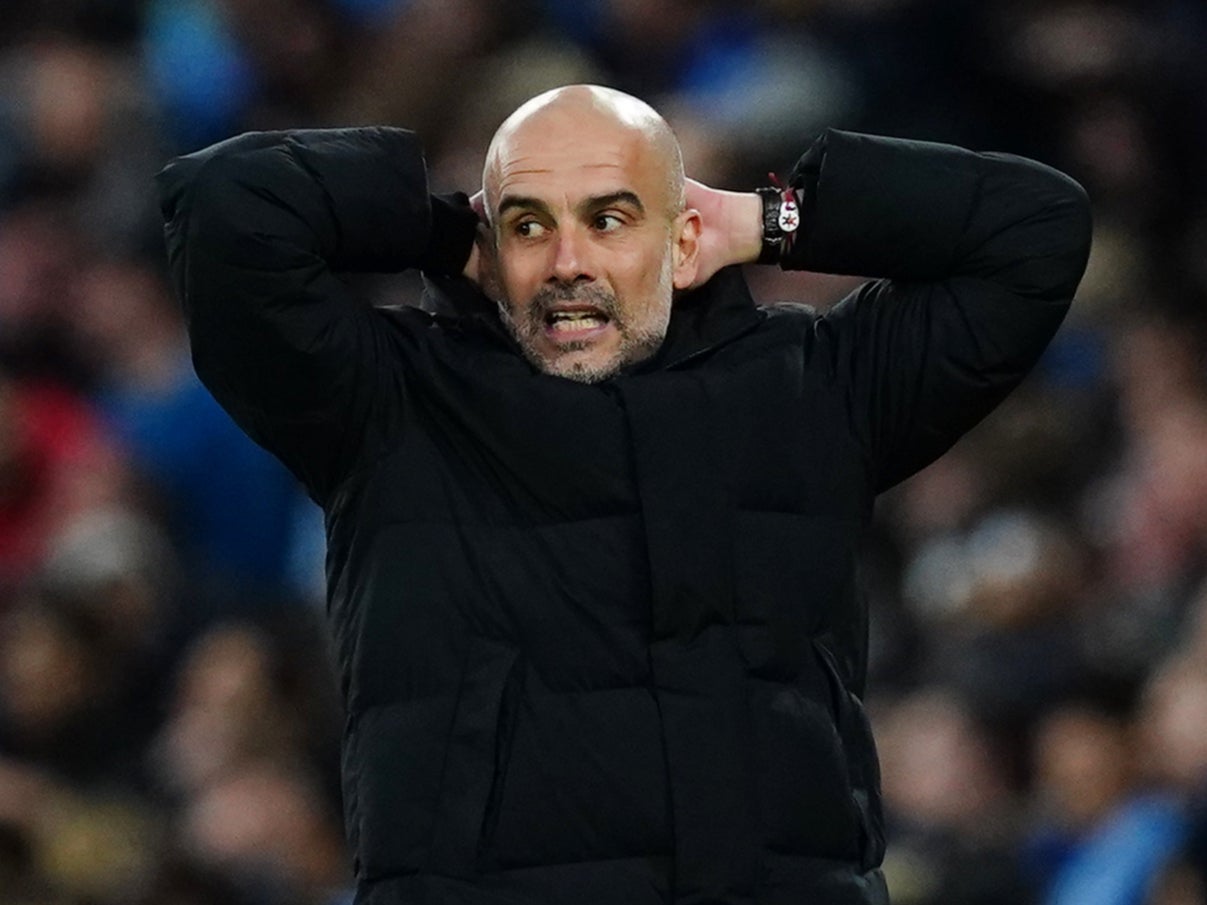 Vinicius Jr runs away from Fernandinho

“Sometimes you do some crosses and sometimes I go right to cross it,” Fernandinho reflected. “I was all right, back to my old days in Brazil when I played there as a right-back.” Indeed, there is a great Brazilian tradition of attacking right-backs, from Carlos Alberto to Cafu, Djalma Santos to Dani Alves. Perhaps there was a late addition to the list.

Or perhaps not. Fernandinho attempted another front-foot intervention, only to be fooled by Vinicius Junior’s dummy, nutmegged as his man sprinted clear to score. Fernandinho was left in distant pursuit, Guardiola with head in hands on the touchline long before the ball hit the back of the net. His captain had an assist at one end, an inadvertent role in a goal at the other.

“It is not easy to control Vinicius, he is an outstanding player, but he did everything,” said Guardiola, no stranger to paying tribute to his players whatever his actual feeling. “I knew he would play well.”

At least Fernandinho was characteristically undaunted. City’s old warrior has a can-do mentality and the adaptability to equip him to play in various positions but this is likely to be his last outing at right-back. After 90 minutes at the Bernabeu, either of his contributions at the Etihad may seem pivotal.

The crowning glory may yet await for the Premier League’s outstanding defensive midfielder of his era. Toure could not have had the freedom to become prolific in Manuel Pellegrini’s centurions without Fernandinho doing the donkey work behind him. Kevin de Bruyne and David Silva, No. 10s reinvented as “free eights,” in the Belgian’s words, perhaps only could have been in a trio because the other one was Fernandinho. He let others shine. Perhaps the unselfish hero will get his reward.

City are constructing statues to celebrate their modern greats. There is a temptation to wonder if Fernandinho will be immortalised in bronze committing a tactical foul. That might be unfair. But maybe, as Vinicius Junior was running free, City wished he would commit a final one. Just for old times’ sake.