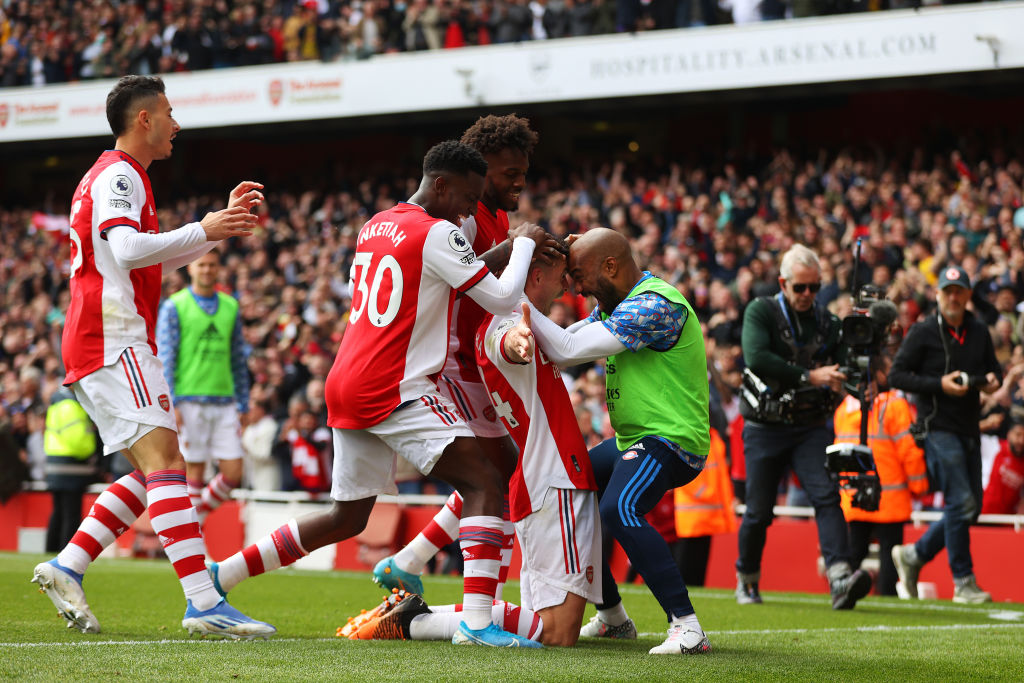 Bruno Fernandes missed a penalty as Arsenal won the crucial Premier League clash against Manchester United to climb into the Champions League spots.

Manchester United were handed a glorious chance to equalise in the second half when they were awarded a penalty, but Fernandes missed the target.

Granit Xhaka’s superb strike put the game to bed with 20 minutes remaining as Arsenal clinched a 3-1 win and delivered a potentially killer blow in the top-four race.

Arsenal are now fourth, though they will drop back to fifth if Tottenham win their game in hand later in the day, while Manchester United are six points outside the Champions League positions with just four games remaining.

Off the back of a humbling defeat to Liverpool in midweek, Ralf Rangnick made five changes for the trip to north London, with Harry Maguire and Marcus Rashford the notable omissions and Ronaldo returning following the tragic death of his baby son.

The Gunners were ahead after just two minutes as Manchester United’s defensive vulnerabilities were exposed again; Raphael Varane and Alex Telles both failed to clean an innocuous cross and Saka’s shot was saved into the path of Tavares who tapped home.

United had a great chance to equalise on 10 minutes as a sloppy Aaron Ramsdale pass was intercepted by Scott McTominay, but Fernandes saw his shot blocked by Gabriel.

Both teams went close in the next few minutes; first Manchester United when Diogo Dalot struck the bar from distance, and later Arsenal as Eddie Nketiah blasted a shot straight at David de Gea.

Nketiah scored a brace in Arsenal’s recent victory at Stamford Bridge and thought he had netted another to put his side 2-0 up, only for his strike to be ruled out for offside.

However, during the VAR check a foul was spotted on Saka in the build-up and Arsenal were awarded a penalty which the England star converted.

Arsenal’s joy was short-lived, though, as Ronaldo was on hand to give the Red Devils hope with his 100th Premier League goal following an inviting cross from Nemanja Matic.

Both keepers were called into action before half-time – De Gea denied Mohamed Elneny and Martin Odegaard while a frenetic Ramsdale kept out Telles – with Arsenal holding a narrow advantage at the break.

The early stages of the second-half lacked the drama and excitement of the opening 45 minutes but United were the superior team as they looked for an equaliser.

It appeared as though one would come when Tavares was penalised for handball, but Fernandes’ penalty clipped the post before going wide, much to the enjoyment of Arsenal fans and goalkeeper Ramsdale, who sprinted up to the Portugal playmaker before celebrating wildly.

United had the ball in the back of the net shortly after but Ronaldo’s volley was ruled out for offside, with VAR showing the five-time Ballon d’Or winner was off by just inches.

Ronaldo continued to influence proceedings and played in Dalot down the right flank, only for the full-back to be denied by Ramsdale who tipped the shot onto the post.

Arsenal needed to respond to United’s threat and did so in spectacular style when Xhaka rifled home a long-range strike to send the Emirates wild.

While Arsenal were left to celebrate one of their most important wins of the seasons, it was another painful defeat for Manchester United in their first game since the announcement that Erik ten Hag will take over in the summer.