Home » Soccer » ‘Everyone has caught the bug’: Fans flock to welcome Socceroos home

Several Socceroos players and staff arrived to a hero’s welcome at Sydney Airport on Wednesday evening as they were greeted by fans waving flags, chanting their names and even mascots in Kangaroo suits celebrating their World Cup qualification.

A day earlier, the players had barely left the pool bar at their hotel in Doha as they let their hair down after reaching the 2022 World Cup in Qatar despite the odds being stacked against them. 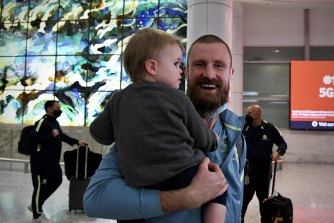 Andrew Redmayne is greeted by his daughter Poppy at the airport.Credit:Dean Sewell

The Socceroos were prevented from playing all but three of their 10 qualifiers at home. Travel restrictions and logistical problems meant they would often have only two training sessions before games and then they were pitted in two sudden-death play-offs. The tension and suspense of the penalty shoot-out against Peru brought back memories of 2005 when John Aloisi’s spot kick ended Australia’s 32-year absence from the world stage, prompting dozens of fans to cheer the team’s arrival at the Sydney Airport, despite restrictions on crowds at the terminal.

“I think it shows we are a football nation. Five consecutive qualifications for the World Cup,” Football Australia chief James Johnson said. “I think we can say with a high degree of confidence that this is a football nation, that we are now.” 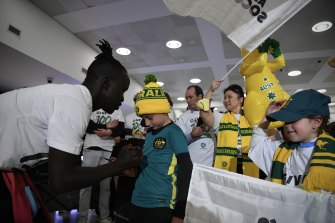 The loudest cheer for the returning Socceroos at Sydney Airport was for the player meant to play the smallest role. The third-choice goalkeeper, Andrew Redmayne, was the unlikely hero and the sight of his beard sticking out of his face mask had a small crowd in raptures.

The 33-year-old pulled off the decisive save in the penalty shoot-out, however it was his antics, tactics and mental games that captured the imagination of a nation.

Despite his inventive efforts in distracting the Peruvian kick takers, seemingly obsessed in stealing their attention, the spotlight isn’t a place Redmayne seems comfortable in. His face has been plastered on the front and back pages of newspapers, while the clips of his save have gone viral around the world. He’s become public enemy No.1 in Lima, but a favourite in his homeland as his save was even touted among the greatest moments in Australian sport.

However, the only thing he deflected away quicker than Alex Valera’s penalty was the suggestion he was the star of the show against Peru.

Redmayne came on as a last-minute substitute for goalkeeper Mat Ryan, deployed specifically for the penalty shoot-out in place of Australia’s captain. Ryan is now preparing for his third World Cup campaign, having played in all Australia’s group games at Brazil in 2014 and Russia four years later.

Ryan believes there has been a bigger reaction for the qualification to Qatar 2022 than previous qualifying campaigns he’s been a part of.

“It’s massive, you can tell already the impact that it’s had,” he said. “Everyone’s caught the bug. Everyone keeps talking about how the whole public here and media is so positive, upbeat and looking forward to it. That’s the influence we have being in the national team, the Socceroos. Success is a contagious thing.”