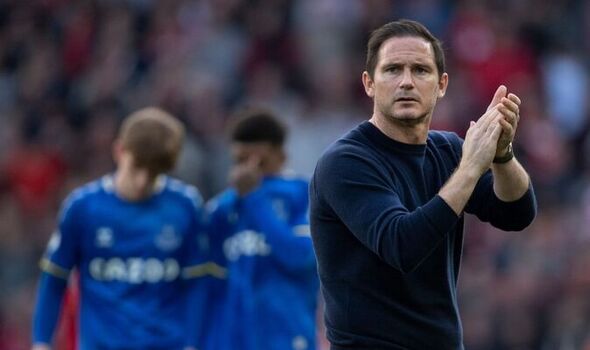 Frank Lampard is facing a potential fine from the Football Association, who have asked him to explain his post-match comments in which he claimed Liverpool would have won a penalty had Mohamed Salah gone down like Anthony Gordon. The Everton boss felt his side were extremely hard done by after leaving Anfield empty-handed in the Merseyside derby.

Everton were incensed when referee Stuart Attwell refused to award a penalty at 0-0 when Gordon went down under the challenge of Joel Matip.

The England U21 international was exceptional throughout the contest but was penalised in the first half for diving – something that may have worked against him on the second penalty shout.

Now The Daily Mail are reporting that Lampard has been asked to clarify the comments he made in his press conference after the defeat.

“It’s a penalty in the second half for us. I don’t think you get them here,” said Lampard.

“If it’s Mo Salah at their end, he gets a penalty. I’m not trying to create a conflict here, it’s just the reality of football sometimes.

“Maybe I’ve played at clubs when we’re in the top reaches of the league, the crowd is behind them and you get them or you don’t.

“For me, for sure, it was a penalty on Anthony. It’s a foul and you don’t get them here.

“I think they are open to it now but it is gone. It is a disappointment, in the cold light of day I think it is a penalty.”

Meanwhile, Everton have also contacted PGMOL, asking for an explanation as to why Darren England did not take a further look at the incident.

Everton are 18th in the Premier League table, two points behind Burnley but with a game in hand.

Speaking after the game, Gordon explained his take on both incidents and he was adamant the second one was a definite penalty.

“The first one, I’ve watched back. I’ve felt the contact and went down, but from a few angles, I can see why [the referee] hasn’t given it. But it’s certainly not a yellow card because it’s not a dive,” he told Sky Sports.

“We could have had a penalty, in my opinion. But sometimes they just go against you and that’s just how football is at times.

“The second [appeal] was the strongest because he stood on my foot. Clearly, I’ve gone one-v-one with him and got the better of him and he’s stood on my foot, which has caused me severe pain and I’ve gone down.”

Jurgen Klopp was less sympathetic, however: “It [the second] was clearly no penalty.

“He’s really good but he’s lucky not to get a second yellow. The first was not a penalty and the second wasn’t.”