Home » European Super League: Splits emerge among breakaway clubs but one 'Big Six' board member vows not to back down

A board member at one of the Premier League clubs that has signed up to the controversial European Super League (ESL) has warned that they will not “back down” – but Sky Sports News understands splits are emerging among the breakaway sides.

Speaking on the condition of anonymity, the board member said the clubs behind the ESL could not be expected to “walk away” from their plans, which they said came in response to UEFA “monopolising competitive football.”

However, another executive at one of the 12 sides that are seeking to establish the new competition has expressed their dismay at the way the announcement has been handled, adding: “This is not what we signed up for.” 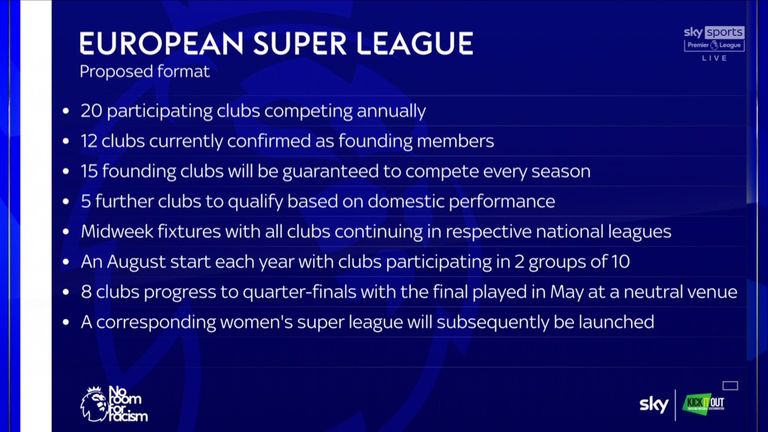 “If we don’t grow our business, we are not doing our jobs properly. We’re being stopped from developing our clubs.

“Being constantly held back has become too frustrating, hence where we find ourselves today. These frustrations can be traced back 15 or 20 years.

“We weren’t expecting people to be jumping for joy. But what is clear is that people have not read through and carefully considered our proposals. That has been a huge frustration.”

However, when asked whether the plans to establish the ESL could be reversed should UEFA agree to further reforms of the Champions League, the board member admitted: “Yes, I believe so.

“But none of those changes have been close to forthcoming after years of discussion, so there would need to be significant compromise.”

On Monday, an executive at one of the ESL’s founding clubs admitted the plans have sparked a “nuclear war” within football, but those claims were dampened by the anonymous board member, who said: “We don’t want war. It’s not our intention.

“But everyone else wants to turn it into a war. We’ve simply been forced to do things another way.

“We’re asking people simply to take a breath. We may not all agree on how we’ve got to this point but this is now a reality and we have to work collaboratively if we’re to find a solution.

“Public relations is important but it’s not going to win or lose this fight. We knew we weren’t going to win any friends on day one.”

The board member also questioned the ability of the domestic leagues and UEFA to stop the ESL, saying: “It’s clear to us that certain rules which we adhere to are not legally sound and we plan to test them.”

However, they added: “The last thing we want to do is to pay lawyers heaps of cash. We all want to remain in the Premier League. We don’t want to leave but we are being threatened with expulsion.”

The announcement of the ESL has caused a huge backlash from many within football, including fans, clubs and pundits, and the board member revealed one of their colleagues had received death threats via social media.

They said: “Criticism and football go hand-in-hand. It’s part and parcel of what we do. But the vile abuse – and in particular the death threats – are wholly unacceptable.

“There’s clearly a lot of emotion out there right now and lots of people feel threatened. There’s no doubt the general reaction has been horrible.”

However, they insisted: “Don’t expect us to back down and walk away from this. Remember, we’re not the aggressors here. We are simply trying to begin a new competition.

“There has to be change. We have tried to bring about those changes from the inside and no one is listening. We tried to find solutions working inside the present framework. We’ve now been forced to find a solution a different way.”

‘This is not what we signed up for’

However, in an indication of how splits are already beginning to emerge among the ESL’s 12 founding clubs, Sky Sports News has been told that some of those sides are beginning to question whether launching the new competition is a good idea.

It can be revealed that some of the clubs are understood to feel as though they are being hung out to dry and are disappointed at the way in which the breakaway has been handled.

The statement confirming the plan to set up the ESL said the league would “commence as soon as practicable”. However, some of the clubs involved were understood to feel that the plans were more exploratory, and believe they have not been made fully aware of events behind the scenes.

An executive at one of the 12 ESL clubs admitted they were shocked at the lack of an effective media strategy since the plans were announced, while another admitted: “This is not what we signed up for.”

Some of the clubs are now understood to want the ringleaders behind the ESL proposals to speak publicly – as yet, the only public appearances from the founding sides have been made by their head coaches.

In addition, those managers are believed to have privately expressed their concerns about the ESL, including the fact that they have been forced to defend the plans in public.

Ole Gunnar Solskjaer was questioned about the ESL when Manchester United took on Burnley on Sunday, while Jurgen Klopp hit out at the criticism he and his players had received when Liverpool faced Leeds a day later.

The Liverpool manager also admitted that he stood by comments he made in 2019 criticising any planned Super League, while Reds midfielder James Milner said: “I don’t like it and I hope it doesn’t happen.”

Asked by Sky Sports News whether any clubs were close to pulling out of the ESL, a board member at one of its founding clubs said: “No, not yet – but the longer this goes on, the harder it gets.”