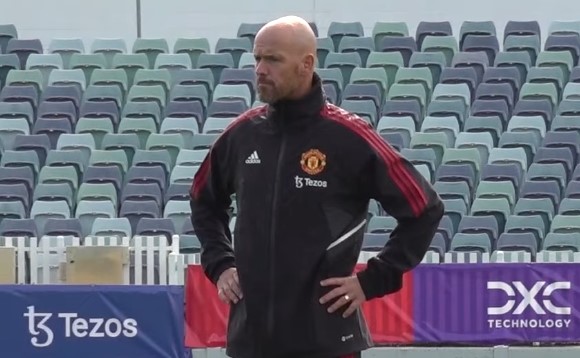 Zidane Iqbal is the latest player to feel the wrath of Erik ten Hag during Manchester United’s pre-season campaign.

Earlier this week, Ten Hag was caught tearing into David De Gea on the touchline after the Spaniard booted the ball up the pitch in the closing stages of United’s 3-1 victory over Crystal Palace in Melbourne.

And during United’s open training session in Perth on Thursday, Ten Hag had no hesitation in calling out Iqbal for his performance in a quick keep-ball exercise.

After spotting the 19-year-old making a mistake during the drill, Ten Hag bellowed at Iqbal: ‘Keep the ball on the floor. Zidane… hey. Keep the ball. F****** rubbish!’

Iqbal has impressed off the bench in all three of United’s pre-season games so far and reports earlier this month claimed Ten Hag has been ‘surprised’ that the midfielder barely featured under Ole Gunnar Solskjaer or Ralf Rangnick last season.

‘I’ve watched the last two pre-season friendlies and the young lads in midfield there – Charlie Savage has been excellent, Zidane’s been very good as well,’ Ferdinand told Vibe with Five.

‘So I think it’s good food for thought. It’s always that way in pre-season, you get a couple of players who come out of nowhere and you go I didn’t expect that from them.’

‘We missed that for a while and discipline is important,’ said the Portugal international.

‘Discipline is not only the way you play, the position that you have, what you have to do, it’s also off the pitch.

‘That’s really good that he’s doing that and amazing, because I like to be on time, so I won’t have problems with that.’