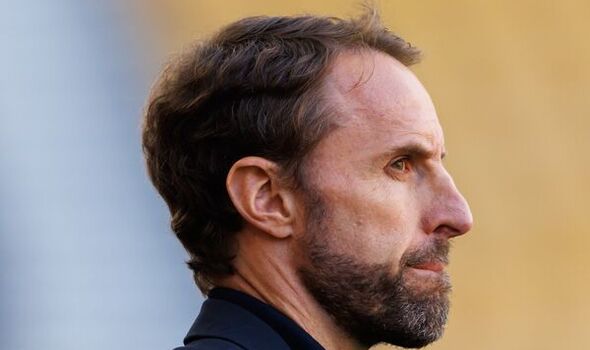 Gareth Southgate has confirmed the FA have asked the Premier League for a low-key final week of fixtures before the World Cup finals. Players are set to get just three weeks’ break from the end of an extended season of international football which finally concludes with the game against Hungary on Tuesday.

With a packed fixture list at the start of the new campaign, there is a fear of burnout before the tournament in Qatar even gets going. So as a small sop to the “huge demands” being put on players, Southgate has begged for a straightforward final weekend before flying out to Qatar with no crunch clashes.

“We have asked the Premier League to have a think about things,” Southgate confirmed. “We’d have a preference for none of those big games but to be honest the difference it’s going to make is fairly marginal. But it could help us with perhaps a medical report if a team played Saturday it would give us an extra day to assess.

“We’re going meet on the Monday and fly on the Tuesday and we’re going to have to make really quick decisions on medical situations in particular. So that’s the only thing that we’re looking at that might help us but we understand the landscape. We’d be stupid not to ask the question if it could make a difference.”

The Premier League fixtures computer kicks into gear on Thursday morning. Southgate admits he has “no control” over the process but the feeling within the Premier League is that it might be given a gentle nudge if it comes up with anything too horrendous for the weekend of November 12/13.

The actual timing of games will not be agreed until October, and with COVID having such an impact on fixtures in recent years, there is a strong precedent of broadcast matches being played at odd times other than the usual Sunday afternoon slots.

“The demands on the players are huge,” he added. “We are all conscious that we can’t keep adding to the calendar. We are still paying the price of Covid, really, with three games in international windows.

“Everything’s condensed, competitions are added but nothing is taken out. In the end I am sure players are gaining more of a voice in that and understandably so.”

Meanwhile, Jarron Bowen has expressed horror at the thought of Gareth Southgate talking about leaving the job, saying, “hang on, I’ve only just got here!” The positive play of the West Ham winger has been one of the bright spots of a toothless England Nations League campaign that has had critics questioning whether Southgate is too conservative in his approach.

Pointedly, the England manager said on Friday, “I won’t outstay my welcome.” But Bowen insists that he, like the rest of the squad, don’t want the 51-year-old to go anywhere. “100 percent!” Bowen said. “This is only my first camp!

“It’s such fine margins in the international game. On another day with the games that we’ve had, we’ve had chances, so we would be coming back off three wins instead of not having a win so far. It’s tight. The group is still very open and we’ve got another game on Tuesday to try to finish strongly.”