Home » Soccer » Elvis is in the building. Will Kamsoba have last laugh after switch to Sydney?

Elvis Kamsoba is aware you probably laughed when he signed for Sydney FC. Many A-League fans did – including a not-so-small number of the Sky Blues faithful.

It was, on face value, a very un-Sydney signing. Kamsoba is capable of things other A-League players can only dream of – a quick, flashy, fearless winger who knows how to get into dangerous positions. But the reason he became a human punchline during his three seasons at Melbourne Victory was because when he reached those positions, he’d rarely score – sometimes when it was almost impossible not to.

To put it colloquially: all show and no go. 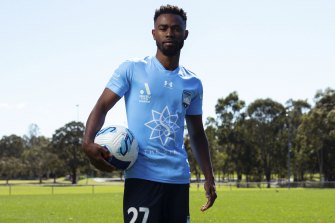 Elvis Kamsoba might have finally found his groove at Sydney FC.Credit:Dominic Lorrimer

All the step-overs in the world count for nothing if you can’t put the ball in the back of the net. It was infuriating for Victory fans – and for the man himself, who often beat himself up about it.

“It’s decision-making. My decisions weren’t the best,” Kamsoba told the Herald. “Sometimes instead of passing, I shot; and instead of shooting, I passed. I was in two thoughts, I guess, and that’s what was bothering me at the time, because [teammates] would tell me, ‘be yourself when you get a chance, just hit it’. But when I get there, I have two thoughts. By the time I’ve got to decide one … that’s what was happening all year.”

The extent to which Kamsoba had become a source of ridicule in A-League circles became clear when Ange Postecoglou took over as Celtic manager six months ago. Someone started a mischievous rumour that Kamsoba was a player of interest for the ex-Socceroos boss. It got as far as a few Scottish football websites and forums – the cruel joke being that he was the last player on earth who deserved such a move. 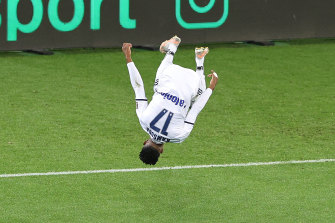 Last season was tough for the diminutive, charismatic 25-year-old. It was a disaster for Victory, too, who finished bottom of the A-League for the first time. Kamsoba says he was promised more opportunities than coach Grant Brebner gave him. Being snubbed left him low on confidence, which was battered further by the team’s horrendous form, lack of cohesion, woeful recruitment and his personal struggles in front of goal.

As the weeks tallied up and the goals didn’t, Kamsoba considered giving the game away entirely.

“There was a time when I just didn’t want to play football any more, I wanted to quit,” he said. “But I have my mother, who’s always supportive. She’s always calling me and telling me, ‘You have gone this far, you can’t just give up now. Keep going – even in tough times, just keep going.’”

The other person in Kamsoba’s corner was Adama Traore, his then-Victory teammate. “Adama was like a big brother to me,” he said. “He kept me going. Every morning he’d tell me, ‘Don’t worry about what the coach is doing – worry about you. If you’re working hard and you’re performing, someone out there’s going to see you and is going to value you more than he does.’”

’Football’s like that sometimes. Sometimes you think you’re not good enough and then the next game you play you’re like, ‘shit, I can play’. It makes you want to keep proving people wrong.′

Traore was right. Kamsoba had a year left on his contract at Victory – in a signal of just how bad their season was, the five goals he scored (four of which came in a hot run across his final seven games) were enough to win him the club’s golden boot. But it was made clear to Kamsoba that incoming coach Tony Popovic did not see him as part of his plans.

These numbers might explain why: in three seasons and 9639 minutes of A-League football for Victory, Kamsoba scored six times.

When his agent told him Sydney FC were potentially interested, Kamsoba barely let him finish his sentence. “I said, ‘Mate, I could even come right now,’” he laughed. 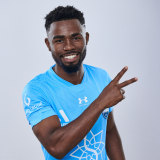 Elvis Kamsoba has been warmly embraced by teammates at Sydney FC.Credit:Getty

Where others saw a player who simply wasn’t up to A-League standard, the Sky Blues saw potential. Mindful of the need to build attacking depth within his squad, coach Steve Corica saw a project player who hasn’t been in the professional system for very long, having played NPL football until 2019, and for whom a change of scenery might do wonders.

“Every time we watched Melbourne Victory, he caused problems for defences. He should have scored more. A lot more,” Corica said.

“It’s about confidence, goal-scoring. You ask any goal scorer. You’ve got to believe in your own ability to do it, and the more he believes he’s going to score the better he’s going to be. We’ve got players here who believe in scoring goals – the two best, really, Bobo and [Adam] Le Fondre. The environment he’s come into here, the set of players and the culture we drive here, he feels comfortable.

“From what I’ve seen so far, I think he’s shocked a few people.”

The early signs are very promising. Kamsoba has settled well in Sydney, living literally around the corner from the club’s training base at Macquarie University – an indicator of how seriously he’s taking this opportunity. Teammates have embraced him. He’s been on fire in pre-season, scoring goals and laying on assists almost at will. Fans have stopped laughing and started asking themselves: what if this actually works out?

Corica sees him as a bench weapon who can stretch tiring defences. “The finishing’s the final part. It’s hard to teach, but he’s just getting into the A-League and seems to be improving. If we get five to 10 goals out of him this year, it’s a good signing for us,” he said.

Saturday night’s derby against Western Sydney will be the first real test for Kamsoba as to how much he’s improved. He may find himself going head-to-head with Traore, who now plays for the Wanderers.

And those jokes when Sydney signed him? Today, they’re motivation.

“It either puts you down, or it drives you. And I think them putting that out there when I signed, it kind of just gave me hunger to get out there and just give it a crack,” Kamsoba said.

“Football’s like that sometimes. Sometimes you think you’re not good enough and then the next game you play you’re like, ‘Shit, I can play’. It makes you want to keep proving people wrong.

“That’s what I’m here for. This is the best club in the country and I’m here to work hard. Things will go the right way.”