Real Madrid winger Eden Hazard was spotted engaging in a jovial conversation with Chelsea stars Kurt Zouma and Edouard Mendy after Los Blancos were dumped out of the Champions League on Wednesday evening, with former Liverpool midfielder Don Hutchinson describing the situation as ‘bizarre’. Goals from Timo Werner and Mason Mount either side of the interval sealed a 3-1 aggregate victory for the hosts, who will face Manchester City for a shot at European glory at the end of the month.

Chelsea were dominant over Real from the first whistle on Wednesday, and could have won the match by at least four goals to nil on the night.

Hazard was selected to start the match for the visitors and played 89 minutes on his Stamford Bridge return, but failed to inspire the La Liga heavyweights to victory.

After the final whistle, the Belgian forward was seen chatting to Zouma and Mendy with a beaming smile on his face despite the unfortunate result for his side.

Hutchinson, who was covering the match as a pundit for BBC Radio 5 Live, was left baffled by Hazard’s post-match actions, claiming that somebody like Cristiano Ronaldo would never be caught laughing and joking after being knocked out of Europe.

JUST IN: Eden Hazard made to regret Real Madrid prediction in Chelsea defeat 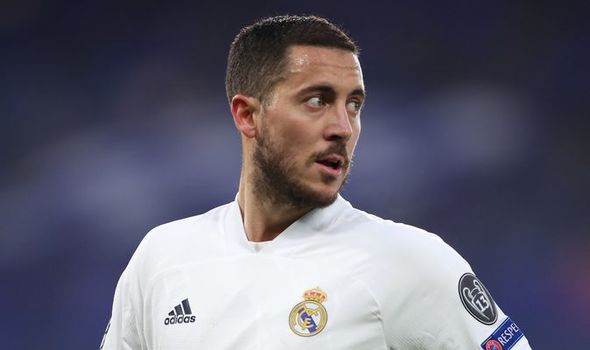 “I know they are his friends but I can’t imagine Cristiano Ronaldo coming off the pitch for Real Madrid laughing. That’s how laid back Hazard is.

“I’m not criticising him. I just find it a bit of a weird watch.”