Ultimately, the matchday stats will read no goals, no assists for Domenico Berardi, which is why such value remains placed in not merely reading the numbers, but tying them into the context of the match.

As a dominant Italy eventually prevailed and cruised to a 3-0 win over Turkey in the first game of Euro 2020, it was Berardi who, time and time again, found the space in the final third and had the telling touch which yielded goalscoring chances for Roberto Mancini’s team.

It cannot be claimed that he was the sole stand-out performer; Jorginho was excellent in midfield, Leonardo Spinazzola relentless from left-back, Lorenzo Insigne just as menacing from the opposite flank and Ciro Immobile ultimately clinical when Turkey tired.

But Berardi, justifying his selection over Juventus forward Federico Chiesa, was right up there with the most impactful and impressive starters and he had more than a hand in all three of the goals which already gives Italy one foot in the knock-out phase.

The 26-year-old has been sought-after among Serie A giants – and , only for Sassuolo to continue to turn those bids aside – with the right-sided attacker’s frequent blessing. He has taken his time to grow and thrive into a leader and a match-winner, but he’s certainly there now, domestically and – on this further evidence – increasingly on the international stage.

Early on in the match, he and Insigne were the regular creators for Italy, finding spaces between the massed ranks of Turkey defenders and midfielders to take possession on the turn, play quick one-twos and release space for the overlapping full-backs. This was, ultimately, fruitless in the first 45 minutes – despite a few efforts from distance and moments of great combination play.

He linked with Insigne for a curled effort off-target, fired one over the bar himself and, importantly, his work rate caused Turkey to have no outlet down the left whatsoever, where would-be playmaker Hakan Calhanoglu waited and watched for a chance on the ball which never came.

In the second half, though, with Turkey’s hard-working defensive eight rapidly tiring and Italy thriving with a fast-growing possession percentage, Berardi was one of those who really came into his own.

The opening goal, all-important, showed not only his clever footwork and close control, but the enormous value of going outside on a player’s weaker foot when the opportunity presents itself. So often with the in-from-out wide forwards, the tendency to cut inside on their stronger foot makes it predictable for full-backs to deal with; on this occasion he instead drifted toward the touchline, past an off-balance Umut Meras and simply drilled the ball into a position it couldn’t be dealt with. Merih Demiral chested into his own net, and the points were never in doubt.

Every squad and player at Euro 2020

There was a wasteful shot on the hour mark with two or three team-mates well-placed centrally, but along with sub Giovanni Di Lorenzo he aided press in the first place to win back possession before the eventual effort. That was a familiar theme throughout the 85 minutes on the pitch for Berardi; constant effort off the ball to support the team efforts in terms of positional play and plan to win the ball back high upfield.

But for forwards, the on-the-ball productivity remains vital – especially to keep a place in this team – and Berardi was not lacking there either. 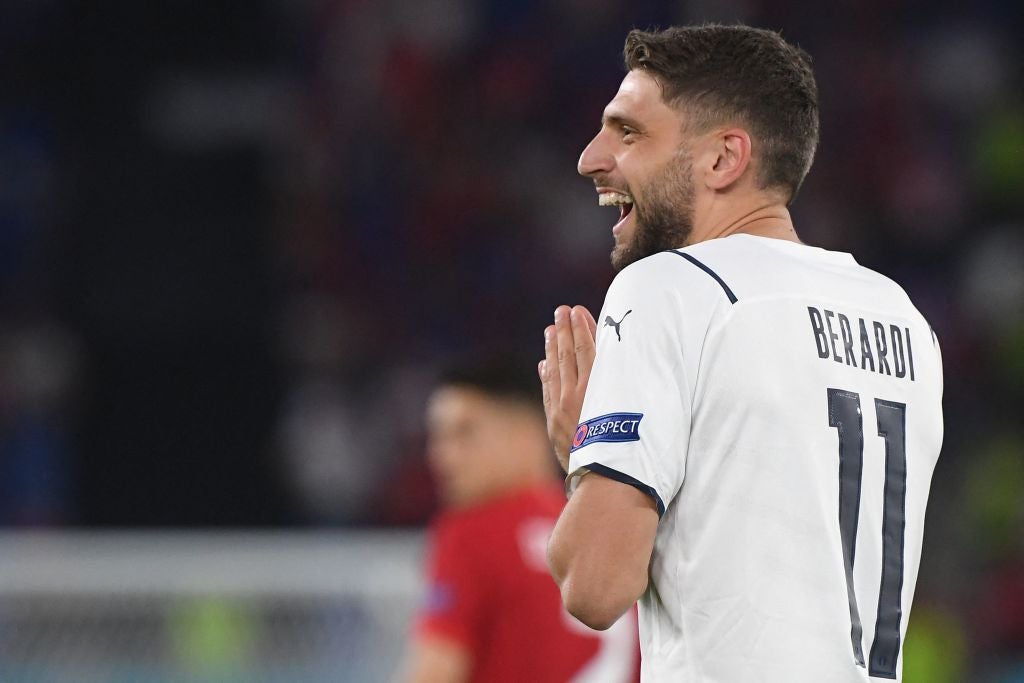 He was instrumental in the second goal, finding space once more on the right of the box before clipping a ball to Spinazzola at the far post. That effort was saved, the rebound tucked away by Immobile.

Then the move of the match ensued, initiated and made possible once more by the No.11: he won ball by intercepting a pass out from goalkeeper Ugurcan Cakir and quickly moved it infield, sparking a four-player, flowing passage of play which ended in Insigne’s delightful, curled finish.

No goals or assists, but no player created more shots on the night than Berardi’s five, and no player was involved in all three goals as he was.

There’s a long road left in the tournament for Italy, of course, and no great player settles for merely one impressive performance at a major finals – nor will it earn a high-profile transfer if they finally want one. But a place in the side can certainly be secured with it, and Berardi more than did his part to ensure he stays in Mancini’s plans, Italy’s line-up and the early stand-outs at the European Championships.