Tony Gustavsson won’t be turning back the clock to rediscover the Matildas’ missing magic at Tokyo, leaving evergreen veteran Lisa De Vanna out of his plans for the upcoming Olympics. 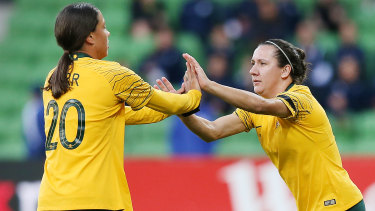 Lisa De Vanna’s hopes of a Matildas recall for the Olympics have been dashed.Credit:Getty

But De Vanna, who proved she had plenty of petrol left in her 36-year-old tank in a dynamic attacking partnership with Cooney-Cross at Victory, was not included, all but dashing her dreams of appearing at a third Olympic Games.

Gustavsson’s final 18-strong squad for Tokyo will be drawn from this current selection, barring any significant injuries or other emergencies, and he said Australia’s profound depth in attacking areas forced him to make some tough decisions.

“I feel that we are overloaded with attacking threats – forwards and attacking midfielders – and I’ve had to leave some of them out of this roster at this time, some really quality players that individually, quality-wise, might have deserved to be in,” he said.

“But when you look at who is in here we are heavy on those spots and I need to look at depth in the backline, I need to look at a couple of multi-functional players, because the roster at the Olympics with only 16 outfield players, I also need to have some players who can play in multiple roles. 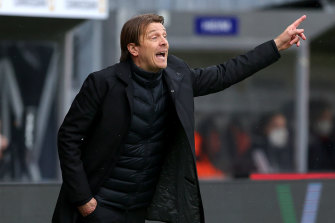 Tony Gustavsson’s first matches in charge of the Matildas ended in humbling defeats.Credit:Getty

“And some players deserve a shot, some new players who have performed very well and I think has to be given an opportunity in the Matilda environment to see if they can bring what they brought at club level into the Matildas level and potentially be available for selection into an Olympic roster as well.”

De Vanna was involved in a Matildas talent identification camp in Sydney last month but her non-selection could well mean the end of her career. She told the Herald and The Age in December that she would turn down the opportunity to play a farewell game for Australia, saying she was not interested in platitudes, even though one more match would draw her level with the country’s most-capped player Cheryl Salisbury on 151 caps.

Gustavsson has instead put his faith in his star line-up of strikers – headed by Kerr and Foord – and perhaps the game-breaking creativity of a player like Cooney-Cross to help them find their attacking spark again, having been humbled in a 5-2 defeat to Germany and a 5-0 loss to the Netherlands in April.

Many had touted the Matildas as Olympic medal contenders but those results, which were Australia’s first games since March last year, and Gustavsson’s first in charge, have reset immediate expectations of the team, and seven players who were involved in that camp have been left out.

Gustavsson has spoken repeatedly of his desire to line up the toughest schedule possible for the Matildas to learn where they really sit in women’s football’s rapidly-evolving global pecking order. The looming showdowns with world No.5-ranked Sweden, who were silver medallists at the last Olympics, finished third at the 2019 World Cup, and are in the same group as Australia in Toyko, and Denmark, runners-up at the last Euros in 2017, continue down that path.

Gustavsson noted that he had not even personally met half of the outfield players in his latest squad, including Lyon defender Ellie Carpenter, who missed the last camp due to COVID-19 protocols.

“I believe this group of players bring together some excellent qualities and I am really looking forward to seeing how they can come together,” he said.

Australia will open their Olympic campaign against New Zealand on July 21, before facing Sweden and the United States. They must finish in the top two of the group, or be one of the two best third-ranked teams in the tournament, to progress.