A compilation of Cristiano Ronaldo’s wasted chances in against Real Sociedad has gone viral, with several football fans on Twitter claiming the 37-year-old’s career is over.

Ronaldo, in just his second start of the season, failed to convert any of the multitude of chances laid at his feet, as the formerly mercurial finisher struggled on Thursday night.

United lost 1-0 to the Spanish side, thanks to a second half penalty, as the Portuguese legend’s first Europa League game in 20 years ended in a miserable defeat. 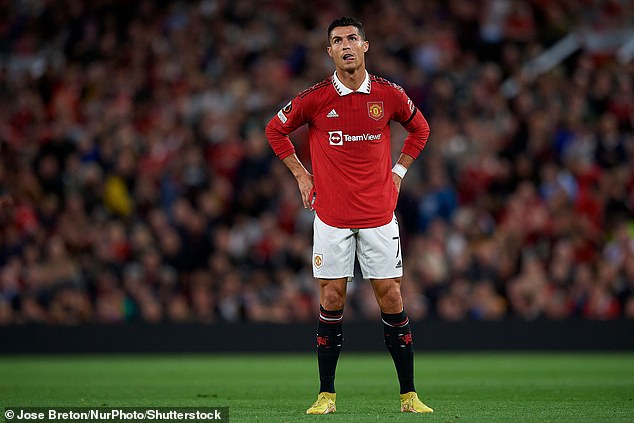 The video highlights Ronaldo’s wastefulness in front of goal as he spurns several good chances, including one in just the 14th minute, as he ran clear behind the Sociedad defence, before dawdling on the ball and inviting a tackle. 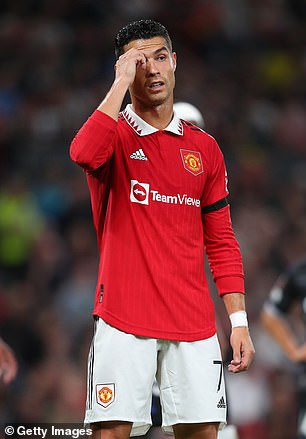 In total, the five-time Ballon d’Or winner failed to convert six good goalscoring opportunities, as detailed by the clip.

He did have the ball in the back of the net in the 35th minute after a brilliant cross from Diogo Dalot, only for the goal to be disallowed after the Portugal captain strayed into an offside position.

One Twitter user posted the video, questioning where Ronaldo’s ranks amongst the world’s greats, accompanied by: ‘Cristiano Ronaldo vs Real Sociedad 22/23 (H).

‘But apparently he doesn’t get enough chances. I run out of words to describe how overrated this guy is.’

A second football fan said: ‘They were saying he got no service hes just dog now.’

And a third simply stated: ‘Sad to see him deteriorate.’

Several Twitter users echoed the sentiment with the majority of fans saying he is ‘finished’, questioning how Real Madrid’s record goalscorer can come back from such a poor performance, and they were not shy in sharing their thoughts.

A fourth football fan responded to the video by saying: ‘My idol is finished even at europa level.’

And a sixth user naturally drew comparisons to his great rival Lionel Messi by writing: ‘He’s finished. Messi is the true [goat].’

Thursday night’s defeat was just Ronaldo’s second start of the season – the first being United’s catastrophic 4-0 loss away at Brentford in their second game of the campaign.

With Marcus Rashford beginning to come good as a centre forward with two goals against Arsenal, he will have to do much better if he is given another opportunity to show that he has what it takes to still compete at the highest level.