Timo Werner has hailed compatriot and Chelsea team-mate Kai Havertz as one of the world’s most talented players.

Striker Werner believes Havertz already boasts wisdom beyond his 21 years, backing the Blues playmaker to improve rapidly as he settles into life in England.

Werner traded RB Leipzig for Chelsea in a £53m deal in the summer, while his Germany colleague Havertz joined Frank Lampard’s side in a £70m transfer from Bayer Leverkusen.

The 24-year-old Werner has settled in at Chelsea the faster, with four goals to his name already, but insisted that his close friend Havertz has the capacity to dominate the English game.

“I know Kai very well and I think he is one of the most talented players in the whole world,” said Werner. “He is a young boy, only 21 and he can learn a lot but can already play like a very, very old and wise player. I think up and until now he feels very well here. A bit like me, we have talked a lot about settling in and he feels he is very happy to be here. 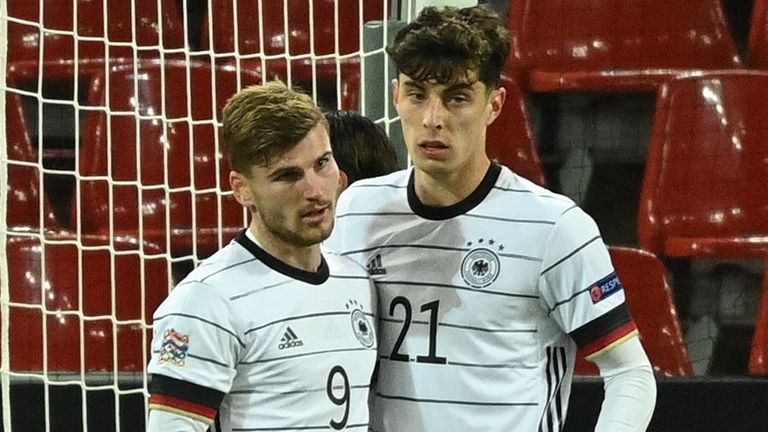 “In a lot of games he has shown what he can do, what he can bring to the team. For Kai it is very important to score, but I think what you can see in his game he is a lot more than scoring goals as a midfield player.

“He plays a lot of key passes, makes a lot of movement for other players. He is very talented and feels good.

“He will get better and better, like me he has come to a new country, language and style of football and has to learn. But until now he plays very good and we will see a lot more good games from him.”

Chelsea will entertain Rennes in Wednesday’s Champions League clash at Stamford Bridge, with Werner confident he has already adapted to the English game.

And having had time to assess Chelsea’s new-look squad, Werner believes the Blues boast an abnormal amount of talent – leaving him even more confident about their chances of major silverware.

Werner arrived at Chelsea insisting he had moved to London to win the biggest titles, and sees no reason to temper that ambition, having found his feet in London.

Asked if he now feels at home at Chelsea, Werner said: “Of course. At the beginning always when you come to a new country, a new league, to come to a different style of football it’s always something different.

“I feel really comfortable now and I hope it will go on like this. I think every team that plays in the Champions League or the Europa League play on Saturday, Wednesday, Saturday, and it’s difficult. But I think we have a big squad, a really big squad of good players.

“That’s not normal. We have so many players, and so many good players. We have to have the goal to come very far in this competition.”

Frank Lampard has heaped praise on “low maintenance” and “very complete” Chelsea goalkeeper Edouard Mendy as he prepares to face his former club Rennes in the Champions League on Wednesday.

He said: “When we looked to sign him, we obviously made enquiries. Petr Cech was heavily involved – I think that’s pretty common knowledge.

“All the feedback was that he had a great personality and was a strong personality in the dressing room. Everything I heard, all those positives, have come through.

“He’s very low maintenance, he works hard, is eager to engage with his teammates and myself. He’s got a smile on his face and has played well.

“When I say low maintenance, I’m not trying to compare to other players. A lot of that is feedback I get from the coaches, and I’ve had that feedback with the other ‘keepers.”