There was pure jubilation painted across Olivier Giroud’s face as he slammed home the opening goal for Chelsea in this most critical of derby victories over Tottenham.

Despite 33 years and many miles on the clock, Giroud is still relishing his part-time role at Stamford Bridge. It is to his credit that he has not allowed it to fizzle out with Frank Lampard depriving him of a move in consecutive transfer windows. Desperate for at least a presence in light of the uncomfortable watch Michy Batshuayi offered on Monday, this was Giroud’s time to shine against a club he could well have been lining up for today.

It is what Mourinho has craved in the absence of Harry Kane and Son Heung-min and this was why Lampard took the decision to retain a player who saw his Euro 2020 dream disappearing in front of his eyes.

Lampard held firm despite Jose Mourinho’s hopes of a late switch by predicting the Blues would revert back to the system that befuddled his Spurs side back in December. Giroud showed enough on Monday night in relief to be handed the role that resembles the last remaining piece of jenga.

Defying gravity at times to hold his jump and cushion the ball into the path of teammates, Chelsea could finally hang their sweeping moves off somebody with Tammy Abraham still unable to start. 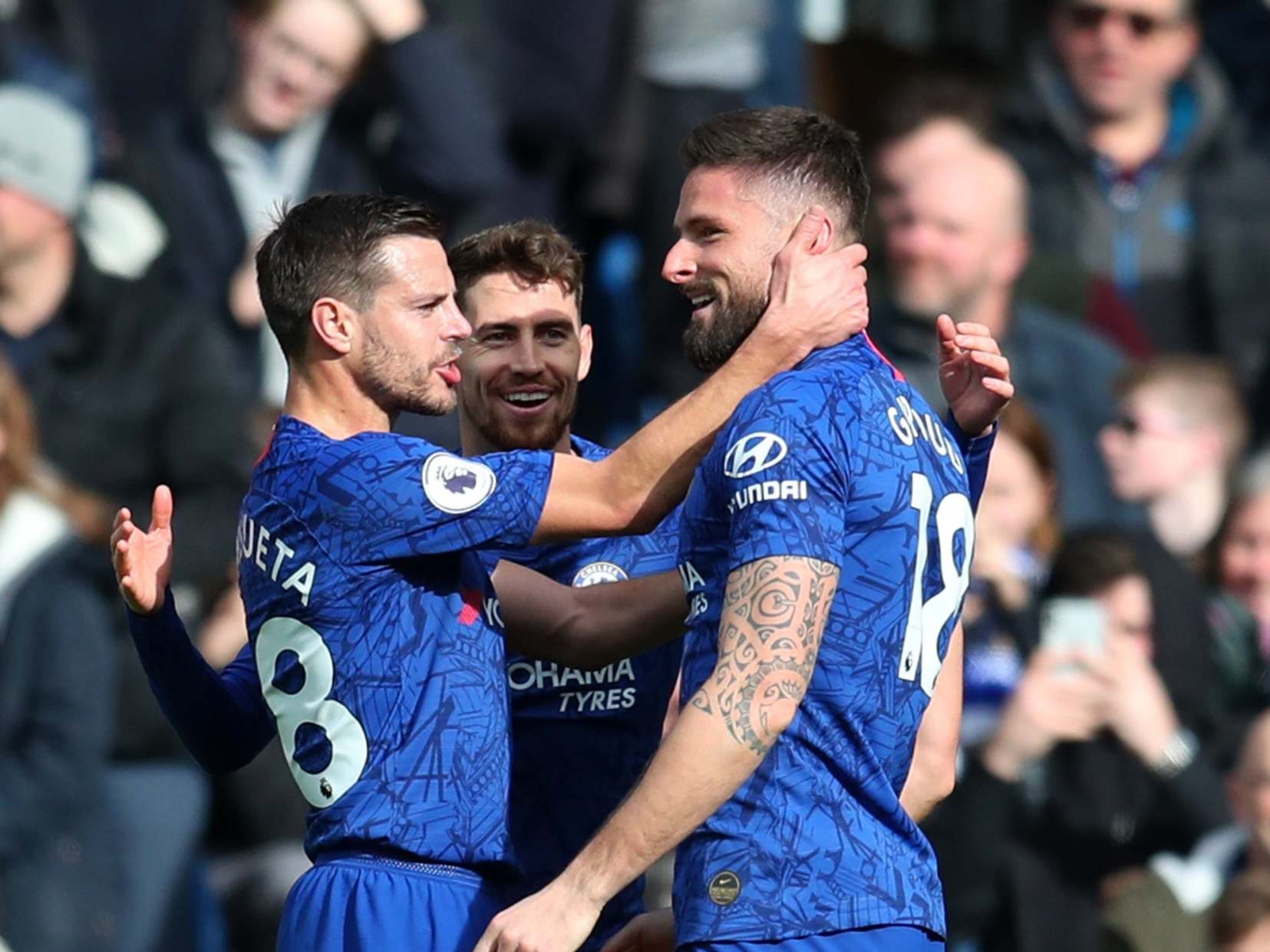 A neat start was rammed home after Jorginho’s curling ball was lifted delicately in behind, despite Spurs setting up with five at the back and three in midfield. Giroud brushed off Toby Alderweireld but his effort cannoned off his French colleague, falling to Ross Barkley, whose own powerful effort then clattered the post.

Giroud was not about to spurn a third opportunity inside as many seconds for the Blues though, snatching his moment with a quite superb volley, dispatched as it fell out the sky low into the corner.

Despite Mourinho’s efforts to deprive the hosts of space in reaction to his own injury crisis limiting his side’s ambition here, Barkley and Mason Mount both found space between the lines. The two England internationals’ wasp-like presence is clearly what Lampard craves most in his sides, yet Mateo Kovacic and Jorginho has the comfort of flipping it to Giroud when Spurs outnumbered the pair. 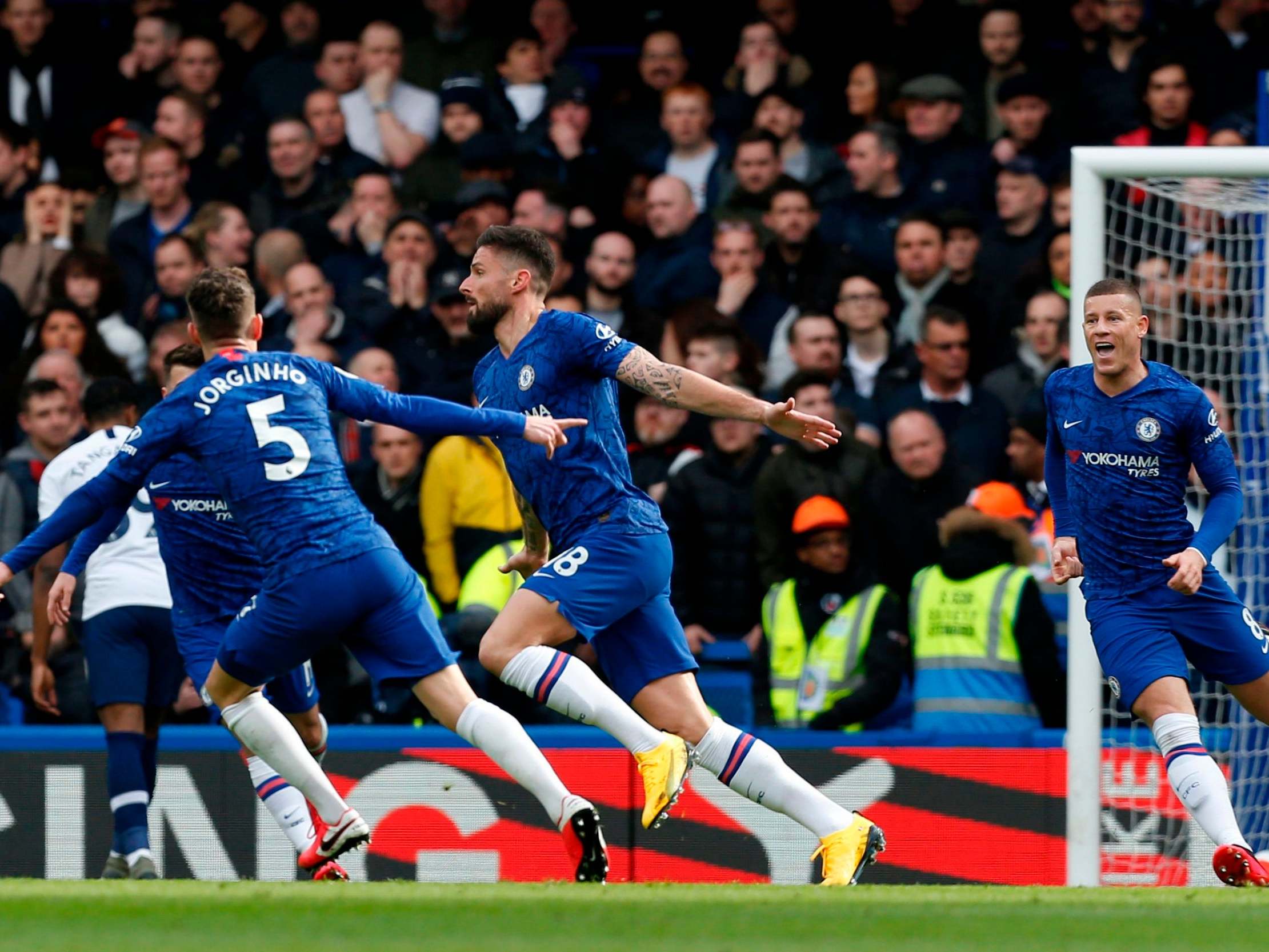 Adept at cleverly using the contact from his opponents, Giroud has made a living in England at instinctively changing the angle of attack. And Spurs suffered when they least expected it shortly after the restart when Giroud was sent down an ally out wide, only to head the ball back inside for the onrushing Mount, suddenly tearing open a wide channel of space to make Mourinho wince in his seat.

Switched inside again to Barkley, whose one touch found Marcos Alonso in space, the Spaniard barely broke stride before carving the ball into the bottom right corner, tormenting Spurs once more.

Giroud would not last much longer, making way for Chelsea’s future in Tammy Abraham, but he’d already made his point. A marriage of convenience it might be, but Lampard has perhaps saved a season that was threatening to spiral out of control.

Not enough goals, one former Blues striker quipped at the break when wondering why Giroud’s presence has been so fleeting this season. But look beyond that and you find a player capable of giving the platform for others to do so much more.