The 33-year-old finally completed his transfer from Barcelona on Thursday, just before the transfer deadline. But he was injured during an attack on his home, with one member of a group allegedly striking his jaw with an iron bar.

Tuchel revealed on Friday that the injury will delay Aubameyang’s first training session with the Premier League club. Chelsea have ordered a protective mask that he can wear to prevent a further injury.

“At the moment he cannot train,” Tuchel said. “We need to provide him with a mask to protect his jaw and then we can start to try with a mask from next week.

JUST IN: Neymar ‘was offered to Man City’ by PSG in deadline day twist 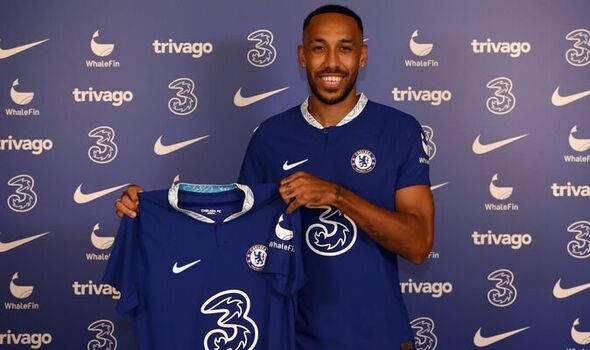 Chelsea have signed Aubameyang just eight months after he left Arsenal for Barcelona following a string of disciplinary issues under Mikel Arteta. Aubameyang was forced to train away from the first team and his contract was eventually terminated, allowing him a move to Spain.

Tuchel worked with Aubameyang at Borussia Dortmund and they shared an excellent relationship. The German concedes that his new forward can struggle with punctuality but does not expect any major issues.

“Nothing big, there was never an issue,” he explained of managing Aubameyang at Dortmund. “He has a problem with his time but he never misses a meeting or something like this. But to arrive 60 minutes before is sometimes a struggle. Never a major concern.”

Aubameyang has taken the No 9 shirt at Stamford Bridge, often linked with a ‘curse’ due to the ill-fated Chelsea careers of those who have worn it in the past. But Tuchel expects the player to overcome the mystery pattern.

Tuchel added: “It’s on us to prove it, for me to find a position, to create enough support for him and on him to finish our attacks. He is not afraid of the past and what a number means. He is ready to write his own history.

“Auba is always happy to fight for something and accept the challenge. The more challenges he has, the better it is. If he wants to overcome the number nine curse, or he wants to prove someone wrong in London – the more, the better. I know him as a person with an open heart. A very positive influence in any group. He is happy to be on the pitch and score goals; this is what we want.”