Perhaps Boris Johnson pushed back his Saturday press conference from its original 4pm start because he’d paid the £14.95 to watch Chelsea. A wise decision from the PM if so.

For anyone who tuned in saw a performance of genuine Premier League title contenders on a cold October afternoon in Burnley, with the pieces falling into place for Frank Lampard. 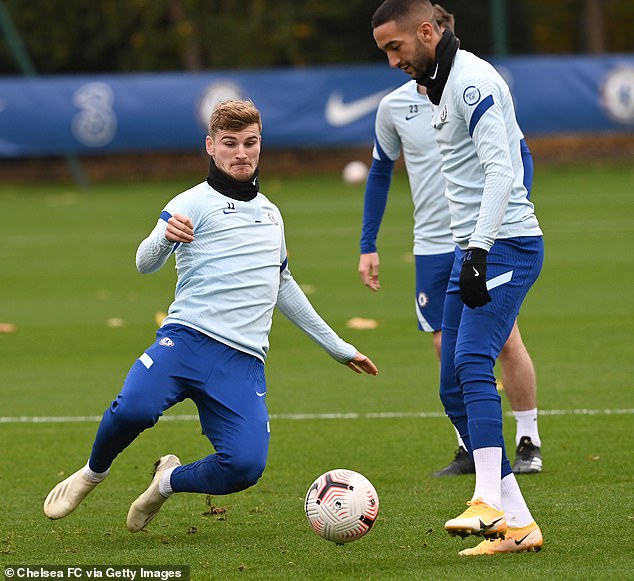 There was another Mendy clean sheet, his fifth in succession. Another Ziyech goal, after scoring on his full debut in the Champions League in midweek.

The midfield balance was there, with N’Golo Kante flanked by Havertz and Mason Mount. It was reminiscent of Fernandinho as the holder behind David Silva and Kevin De Bruyne for Manchester City.

There was real fluidity to Lampard’s 4-3-3 set-up. The touch maps of his players show they weren’t restricted to a single area of the pitch, but rather encouraged to roam.

‘They’re giving me nice feelings and ideas as we move forward,’ said Lampard, whose only complaint was that he lost Christian Pulisic to a hamstring injury in the warm-up. ‘I keep saying we haven’t trained a lot — we’re playing games to improve. When you miss pre-season, you’re looking at those tweaks in formation at the start of the season.

‘Now we are playing slightly different in the last couple of games and there have been a lot of positives, but that doesn’t mean we can’t change back. Sometimes it takes that process of tweaks in formation to see the best way forward. When you see performances like that, it gives you a nice feeling.’

Mount and Ziyech were highlighted for praise on Match of the Day and rightly so, while Havertz is a useful player to have, too. He can play on the wing, as a No 10, or a No 8 as he did here. That versatility is partly why Chelsea were prepared to pay Bayer Leverkusen’s £71million asking price.

‘A real plus,’ said Lampard, who will now turn his attention to Rennes in the Champions League on Wednesday night.

For Burnley, this was their fifth defeat of the season.

Sean Dyche emerged for his post-match press conference complaining about a penalty which was not given, when Ashley Barnes collided with Mendy at 0-0.

‘Honestly, the penalty thing, now in the Premier League, I don’t know, I’m confused what is and what isn’t,’ Dyche said. ‘I don’t know how that’s not a penalty.

Conspiracy theories aside, Burnley are in trouble. They are all over the place on the pitch, while there is talk of Egyptian businessman Mohamed El Kashashy taking over the club, too.

Really, it is unlikely Johnson made time to watch Chelsea on Saturday. But those Blues supporters who did can have no regrets. This was a sign of things to come, and the title race is there to be joined.