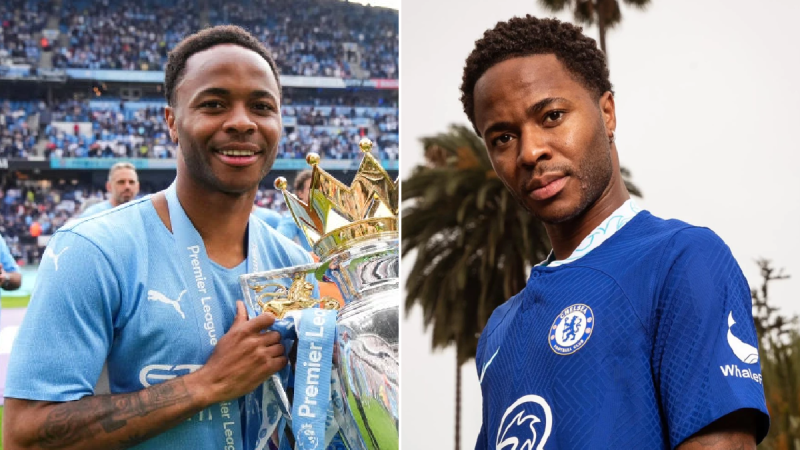 The 27-year-old has played a pivotal role in City winning the league in four of the last five seasons but he is looking for more regular starts ahead of the Qatar World Cup later this year.

Barcelona, Real Madrid and Bayern Munich were also interested in Sterling, but it is the west London club who have won the race for his signature.

Upon confirmation of his arrival, Sterling explained he has been impressed by the vision of Thomas Tuchel and the German coach’s role for him.

‘First and foremost, it’s a pleasure to be here,’ Sterling said.

‘I’ve obviously achieved a lot in my career so far, but there is still so much more to achieve and I’m really looking forward to doing that in a Chelsea shirt, under Thomas’s management.

‘London is my home and where it all started for me, and it’s amazing I now have the opportunity to play in front of friends and family week in, week out at Stamford Bridge. I’m really looking forward to meeting the fans there soon.

‘I do want to take the opportunity to thank Todd, Behdad, the ownership group, Thomas, and all involved in the process of getting me here.

‘I can’t wait to get going now and continue to do my talking on the pitch.’

Sterling is the first major signing under the club’s new owners, the consortium led by American billionaire Todd Boehly.

‘Raheem Sterling is a serial winner and his signing is an important step in strengthening our squad,’ Boehly said.

‘We are delighted for Raheem to return to London with Chelsea, and we look forward to seeing his world-class talent on display at Stamford Bridge.’

Also on the agenda for the Blues in the summer transfer window is two new defenders to replace Antonio Rudiger and Andreas Christensen, who both left on free transfers.

The Blues are thought to be on the brink of sealing a move for Napoli defender Kalidou Kouliably, who is set to sign a four-year deal in west London.