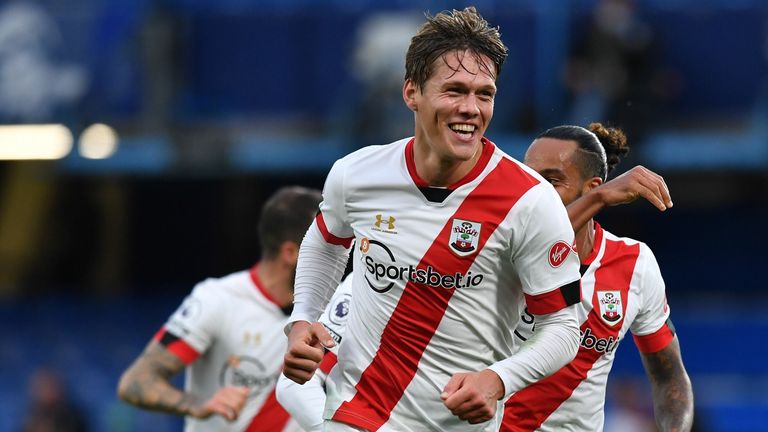 Timo Werner scored twice and assisted another for Chelsea but Jannik Vestergaard’s last-gasp equaliser earned Southampton a 3-3 draw in another Premier League thriller at Stamford Bridge.

With Chelsea leading 3-2 in stoppage time, Vestergaard flicked home Theo Walcott’s half volley for only his second Saints goal following a chaotic clash in which the visitors had also come from 2-0 down to level.

It all started swimmingly for Chelsea as Werner finally opened his Premier League account with a brilliant opener, selling Jan Bednarek a dummy before slotting bottom corner (15), and the German soon got his second, again beating Bednarek to the ball and lifting over Alex McCarthy before nodding home (28).

Saints halved the deficit from nowhere as Danny Ings rounded Kepa Arrizabalaga before finishing (43), and got their leveller in chaotic circumstances as another Kepa error from Kurt Zouma’s short backpass allowed Che Adams to score following a melee in the box (57).

But Chelsea immediately regained their lead as Werner squared for Kai Havertz for his first Premier League goal (59), and looked to have survived late chances for Adams and Ings, before Vestergaard popped up with the equaliser.

Man of the match: Timo Werner At a time where Premier League football is resembling basketball, drama and chaos was in no shortage at Stamford Bridge, punctuated by some superb attacking play.

Saints played a risky game in the first half, pressing Chelsea’s full-backs from the off, and the Blues dominated the early stages as Ben Chilwell’s low effort forced a good save from McCarthy, who then got up to deny Havertz at the rebound.

Adams forced Kepa into a low block with his feat at the other end, but Werner, who failed to score in his first four Premier League games, then put Chelsea ahead. 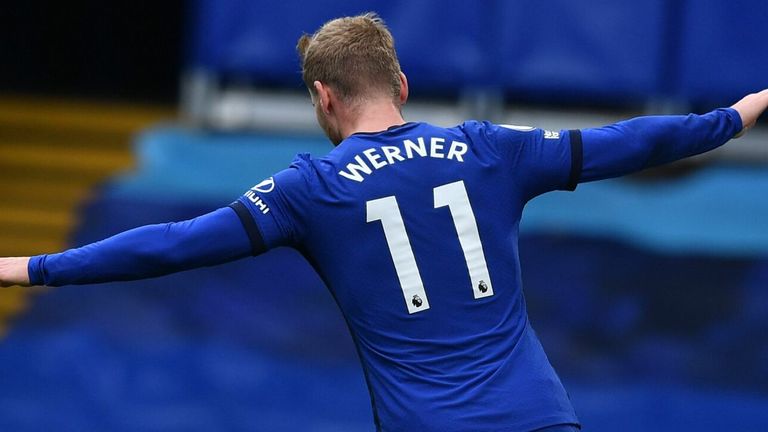 Receiving the ball from Chilwell from deep, the German superbly dummied Bednarek, paced into the box and danced past two challenges before driving bottom corner through the crowd from 14 yards.

And Werner got his second, again causing Bednarek nightmares, getting goal-side of the Saints defender from Jorginho’s long ball, before lifting over McCarthy and collecting the other side to head into an empty net.

Werner was at last beginning to live up to the hype following his £50m summer move from RB Leipzig, but for all the money spent on attacking players, Chelsea’s defensive concerns came to the fore again as Saints scored from nowhere.

It was in fact £75m signing Havertz who lost the ball deep in his own half, and as Chelsea’s back line sat high, Adams was able to play Ings through on goal, rounding Kepa before sliding into the empty net. 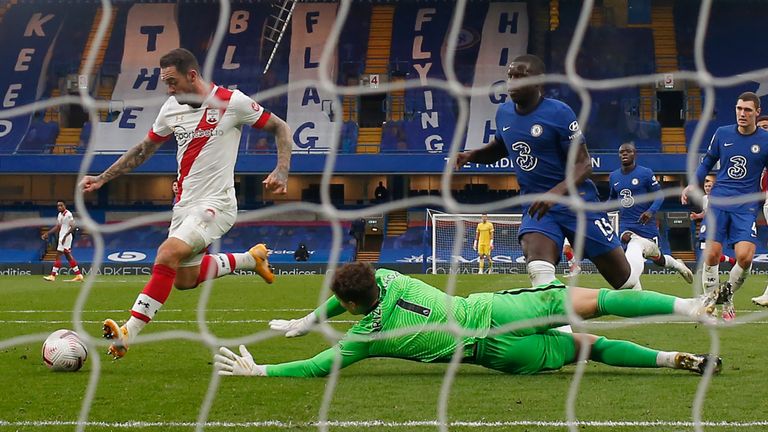 Saints kept Chelsea waiting at the start of the second half, taking an age to emerge from the newly-located away dressing room at Stamford Bridge, and the hosts were then caught cold with a bizarre equaliser.

Zouma sold Kepa short with a back pass, but the goalkeeper, replacing injured new signing Edouard Mendy, added to a long list of errors as he completely missed the ball ahead of Ings, before chaos on the line as Ings and Adams desperately tried to turn the ball home. Adams eventually took over, despite Andreas Christensen’s best efforts, and slammed into the roof of the net.

Just 121 seconds later, Werner was again found in space, this time on the right of the box, and his square ball for compatriot Havertz was simply swept past McCarthy from eight yards. 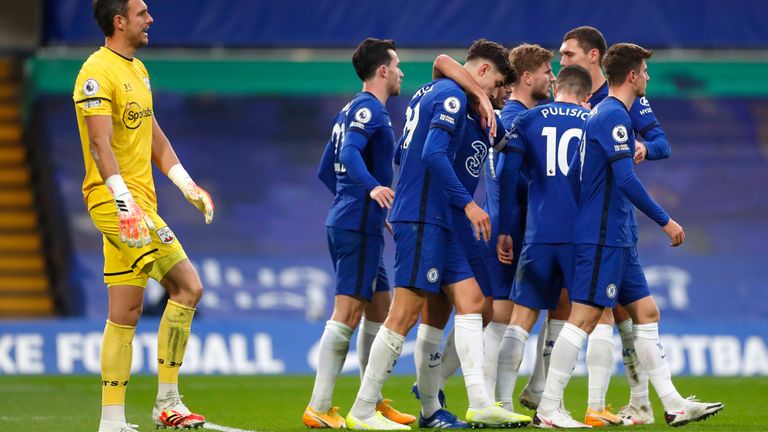 The game calmed down for all of five minutes before more drama and chances; Havertz headed a fine chance over, Adams drilled just wide at the other end and Ings’ snapshot forced a low save from Kepa, and the game took one more twist in stoppage time.

New signing Ziyech was on the bench for Chelsea, while injured ‘keeper Mendy was replaced by Kepa, Christensen came in for the injured Thiago Silva, Pulisic returned for Hudson-Odoi and Mount was in for Abraham.

Walcott made his second Saints debut, 15 years after his first, replacing the injured Armstrong, while Redmond came in for Djenepo.

As Walcott slammed a half volley into the ground from just inside the box, Vestergaard stooped low to flick a header into the far corner from 10 yards.

Chelsea have conceded an average of 1.5 goals per game in the Premier League under Frank Lampard (63 in 43 games), the Blues’ worst rate under any boss to oversee more than one game in the competition.

Chelsea will be kicking themselves after dominating before Ings’ goal in the first half, but nothing can be assumed or ruled out in this most bizarre of Premier League seasons.

Chelsea now host Sevilla in their opening Champions League group game on Tuesday at 8pm, before going to Manchestrer United on Saturday, live on Sky Sports Premier League at 5.30pm.