Home » Soccer » ‘Change is the last thing we are thinking about’: Victory back under-pressure coach

Rookie Melbourne Victory coach Grant Brebner has the backing of the club’s hierarchy despite a poor run of form that has left the fallen giants marooned to the bottom of the table.

Victory chairman Anthony Di Pietro showed he was not afraid to pull the trigger early last season when he axed underperforming German coach Marco Kurz midway through the campaign. 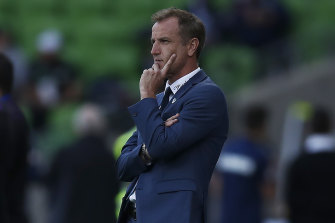 Grant Brebner has the backing of the Victory hierarchy.Credit:Getty Images

But Brebner – who led the team into the knockout stages of the Asian Champions League for only the second time in its history in November – has more credits in the bank than most, having been associated with the club for much of its existence.

“Change is the last thing we are thinking about,” said one individual close to the management at Victory.

“We want to be supporting to ensure we can turn things around and get some wins on the board and start developing some confidence in this group.”

Brebner and his recently appointed No.2, vastly experienced former English Premier League manager Steve Kean, have won only one game from six this season. When the former midfield star and dual title winner was in charge during the hub to complete the last A-League campaign, Victory won only one of their five matches.

Victory’s latest loss was to Western Sydney on Wednesday night, a 2-0 defeat away.

But they are due to have a run of three home games in succession over the remainder of February – Wellington on the 17th of this month, Newcastle on Sunday 21st and Adelaide on February 27.

And they are also expected to get a further two yet-to-be confirmed games in succession at Marvel Stadium following that, so will have a run of five matches in their own backyard to turn things round.

Hiring such an inexperienced coach was always going to be a gamble, but Victory insiders point to the extraordinary circumstances Brebner has had to face during COVID-19.

While other clubs retained many of their players from last season, Victory dumped several underperformers and signed a number of fresh faces, including several former English Championship players, in a bid to complement the youngsters with whom Brebner had planned to rebuild the squad.

They are struggling to adapt to the Australian conditions and the demands of the A-League and one of them, French forward Rudy Gestede, cost his team dear by giving away a bizzare penalty against Wanderers late in the game when the score was 0-0 and a point was on the cards.

He will be without important New Zealand international forward Marco Rojas for at least one game after the Kiwi winger was forced off after being kicked in the face by Wanderer Graham Dorrans.

Rojas travelled back to Melbourne with the team on Thursday and it is thought he has a small fracture. He will be ruled out of the Wellington game because of concussion anyway.