Champions League team of the week: Salah slots in after netting the fastest Champions League hat-trick ever, bloodied Rudiger’s heroism earns him a place and an ex-Liverpool stopper makes the cut

The fourth round of the Champions League group-stages provided some fantastic displays.

Manchester City, Real Madrid, Bayern Munich, Club Brugge, and Napoli have all already advanced into the last-16 knock-out stages of the competition.

Not only that, records were broken, and teams missed out on the chance to qualify for the next stage.

Sportsmail has picked its team of the week from the fourth round of Champions League group-stage fixtures. 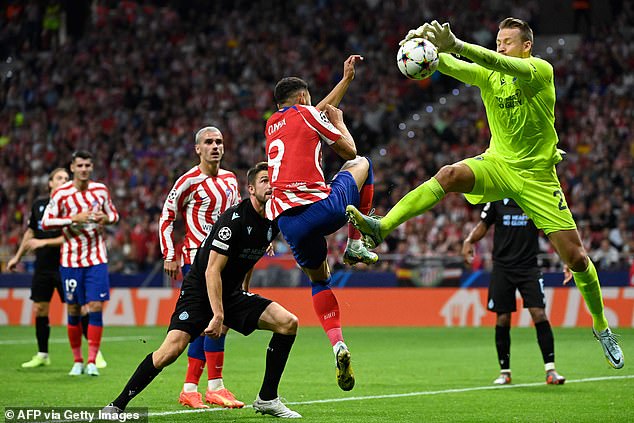 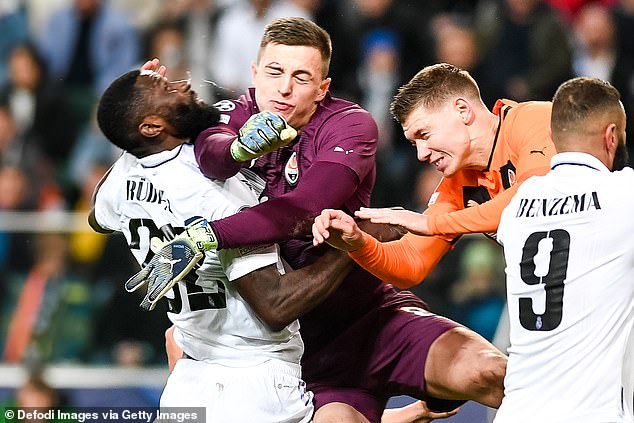 The former Liverpool shot-stopper has been outstanding for Club Brugge in the Champions League to continue their impressive start.

It was a fourth consecutive clean sheet for Simon Mignolet as they sit top of Group B with 10 points out of a possible 12 after four games played.

The Belgium international made nine saves from inside the box during their 0-0 draw with Spanish giants Atletico Madrid.

Mignolet arguably was the reason behind Brugge keeping their unbeaten record in the group-stages. 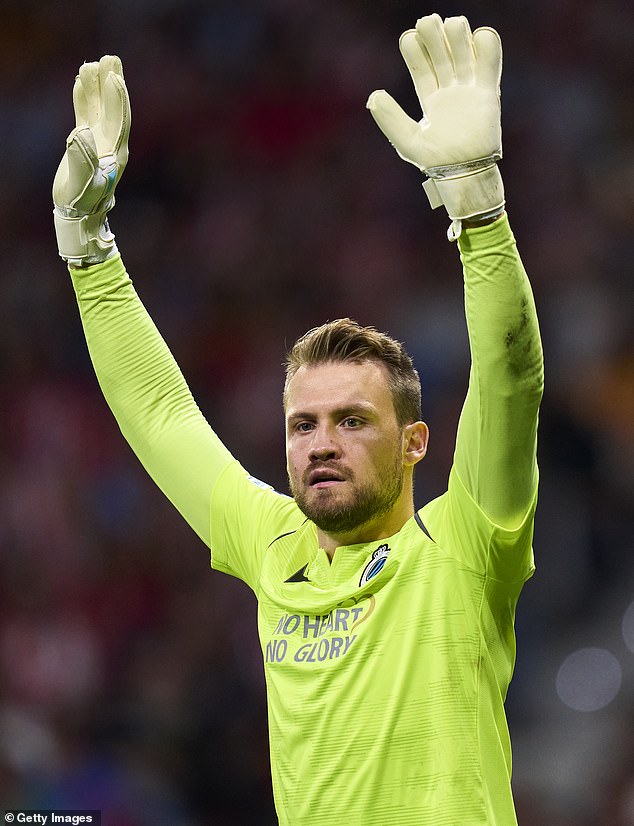 A bloodied Antonio Rudiger earned Real Madrid a point against Shakhtar Dontesk leaving the Ukrainians seconds short of a famous win over the European Champions.

Blood was pouring from Rudiger’s face as he felt the full force of Shakhtar keeper Anatolii Trubin in the 95th minute of the game.

Just before the impact he had got his head to Toni Kroos’ cross and put Real Madrid back on terms with their last attack of the game.

The 1-1 leaves Madrid top with 10 points and Shakhtar third a point behind second-placed RB Leipzig. 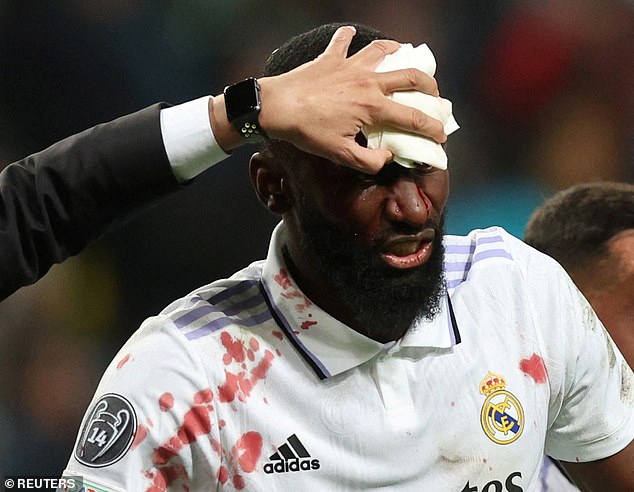 The visitors took the lead in the first half when Tanguy Nianzou headed home Ivan Rakitic’s set piece after 18 minutes.

The French defender almost set up Erik Lamela for a potential winner as he nodded down a Rakitic corner later in the match after seeing his opener cancelled out by an equaliser from Jude Bellingham.

Sevilla sit in third spot on two points and still have a slim chance of reaching the last 16 – although it now looks very unlikely after failing to beat Borussia Dortmund. 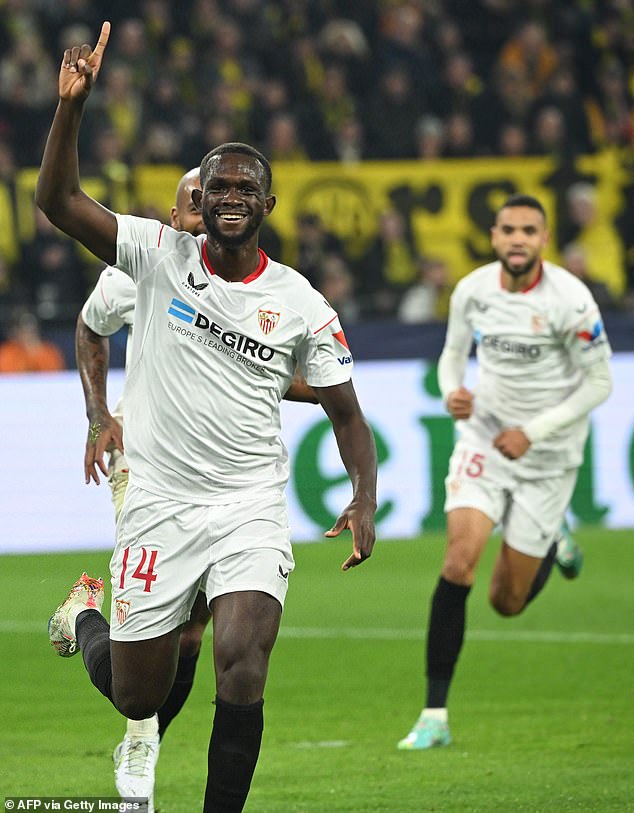 The left-back was a stand-out during RB Leipzig’s 2-0 victory over Celtic in the Champions League.

The German defender created two big chances, he had 88 touches, 51 out 58 accurate passes. He won all of his aerial duels and won the majority of his ground duels.

The 24-year-old also made two vital clearances during the match to help his side seal the victory and move them onto six points. 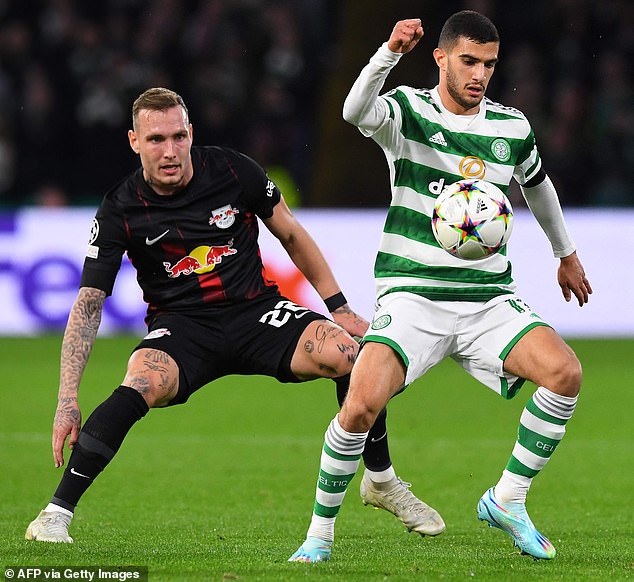 Leon Goretzka netted twice for Bayern Munich in the first-half as they cruised to a 4-2 victory over Viktoria Plzen to help them progress into the knock-out stages of the Champions League.

The Germany international played a one-two with Sadio Mane with the latter opening the scoring for the Bundesliga champions.

Thomas Muller doubled Bayern’s lead before Goretzka nabbed a brace to round off the scoring for Bayern as the Germans kept a toothless Plzen side largely in check.

Adam Vlkanova and Jan Kliment pulled goals back for the home side in the second half. 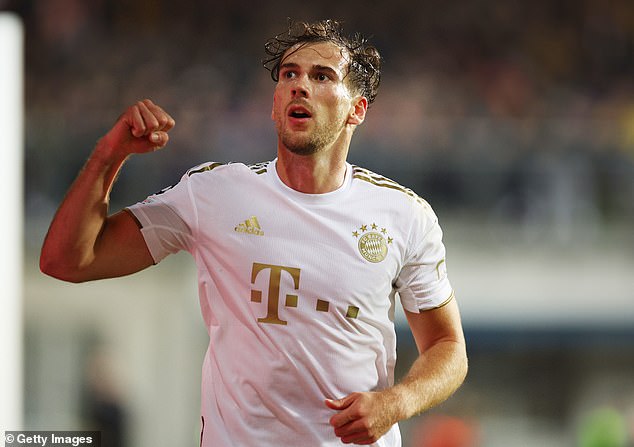 The England international continues to impress on the world stage as he notched a goal to help Borussia Dortmund earn a 1-1 draw against Sevilla.

The youngster scored in his fourth straight Champions League match in the 35th minute of the clash.

Bellingham volleyed home from a well-executed move down the right wing, to also become only the third teenager to score in four consecutive Champions League matches after Erling Haaland and Kylian Mbappe. 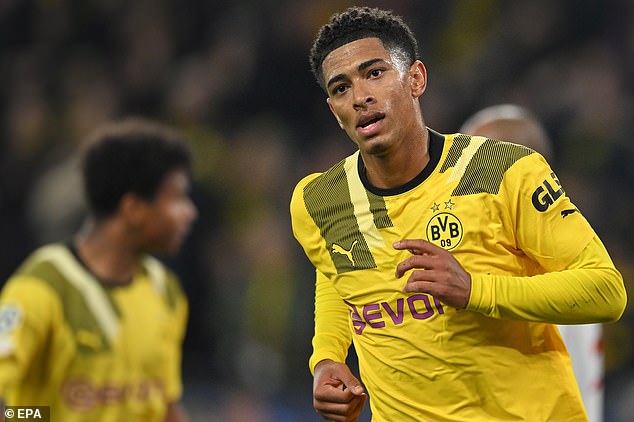 Mohamed Salah didn’t even start the game at Ibrox. He still scored three goals in a six-minute span in the second half — the fastest hat trick in Champions League history.

Salah entered the fray in the 68th minute and got his first goal in the 75th minute before scoring again just five minutes later. Another goal swiftly followed, with Salah scoring a hat-trick in just six minutes.

The winger broke the record for the fastest hat-trick in Champions League history, achieving the feat two minutes quicker than Bafetimbi Gomis managed for Lyon against Dinamo Zagreb in 2011.

That wasn’t the only record that Salah broke, as he has also now scored the most goals for an English club in the Champions League with 38.

The Egyptian was inspirational as the Reds thrashed Rangers 7-1 to put themselves in a good position to progress into the knock-out stages. 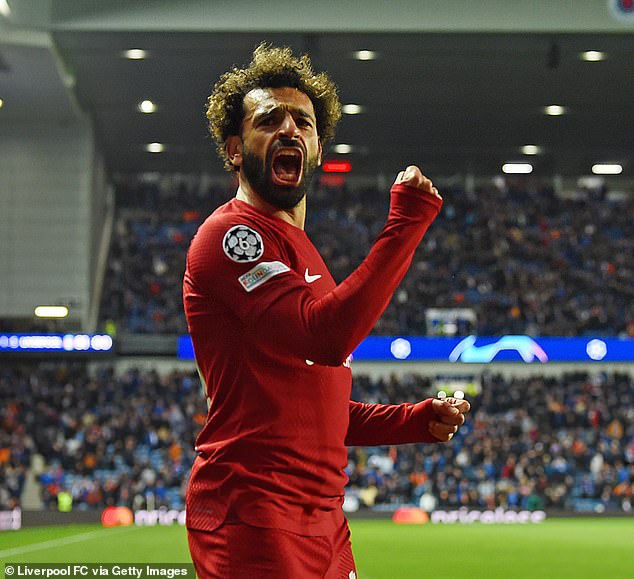 The South Korean sensation was instrumental in keeping Tottenham’s hopes of progression alive as he scored a brace in their 3-2 victory over Eintracht Frankfurt.

Son Heung-min was in electric form as he scored two goals, including a superb first-time thunderous volley.

He even forced the German side’s red card as Tuta was sent off for two yellow cards in the space of three minutes for fouls on the South Korean.

The attacker had five shots, all going on target, 12 out 14 accurate passes and plenty of successful dribbles during the match. 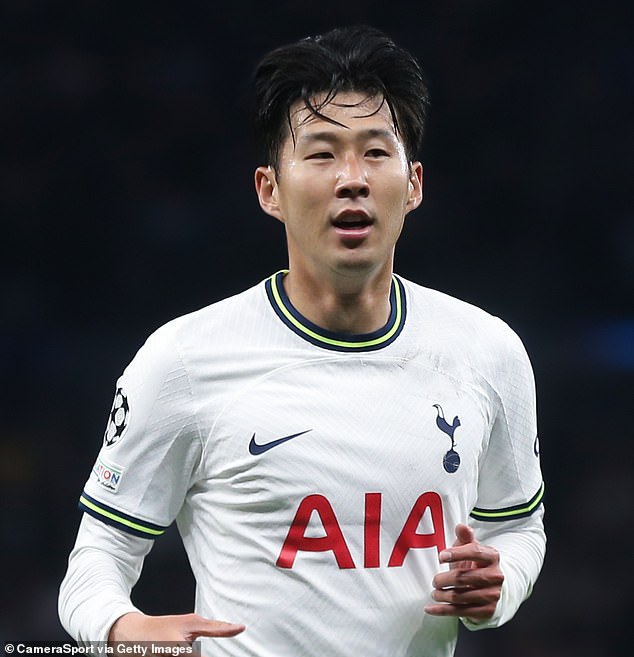 The Brazilian is in terrific form and there is no signs of that slowing down as he scored a brace in the Reds huge 7-1 victory over Rangers.

Firmino now has eight goals and four assists to his name and has been the bright part of what has been a poor start to the new season.

An interesting statistic, only Erling Haaland (23) has more goal involvements for Premier League clubs in all competitions this season than Liverpool’s Roberto Firmino (11). 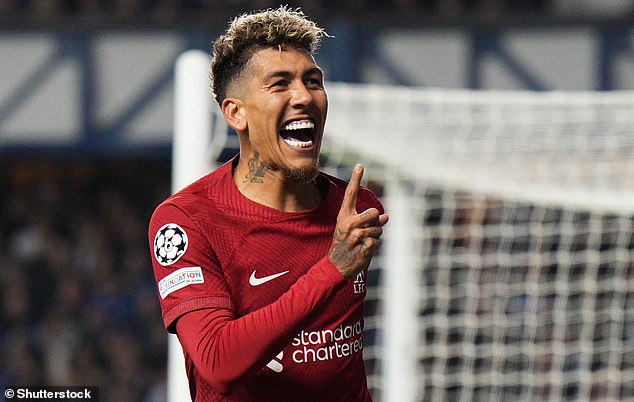 The Polish international has kept Barcelona’s hopes of Champions League progression alive as he scored two late goals to earn Barcelona a point in a breathless 3-3 draw with Inter Milan.

The Catalan giants are still facing elimination at the group stage of the competition for the second consecutive season but Lewandowski’s stoppage-time equaliser gave them a slim chance of progressing with two games left.

Lewandowski gave Barca hope with 10 minutes to go. Bastoni failed to clear his initial header, allowing Barca’s top scorer to gather up the ball and leather it past Andre Onana.

Lautaro Martinez then restored Inter’s lead, but the prolific striker popped up again in injury time to make it 3-3 with a thumping header. 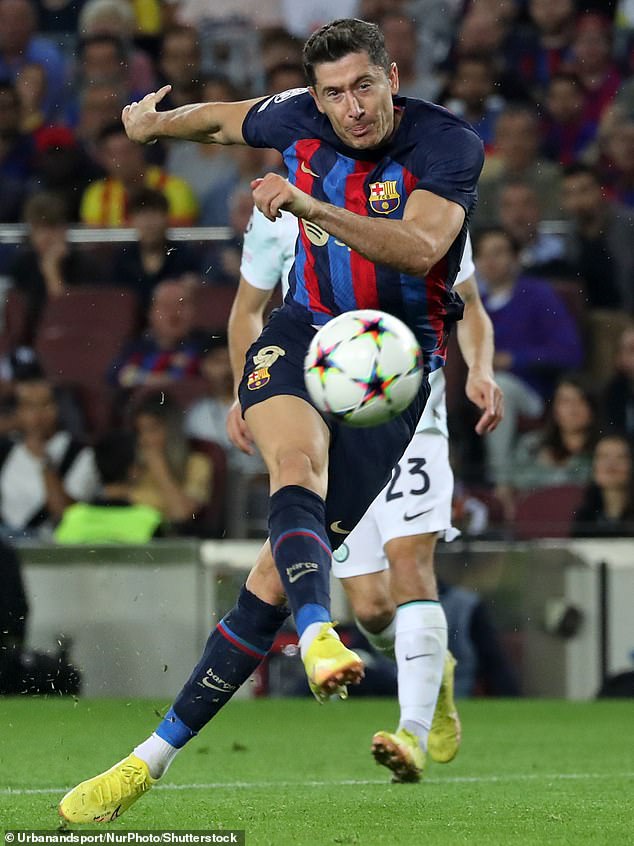 Taremi doubled Porto’s lead from the penalty spot seven minutes after the interval following a VAR review after Galeno’s opener.

Galeno was brought down again inside the penalty area just after the hour mark after attempting to weave his way past Odilon Kossounou, and the referee pointed to the spot, with Taremi making no mistake again from 12 yards with a coolly-taken penalty into the bottom-left corner.

His finishing from the spot didn’t allow Leverkusen back into the game at all. 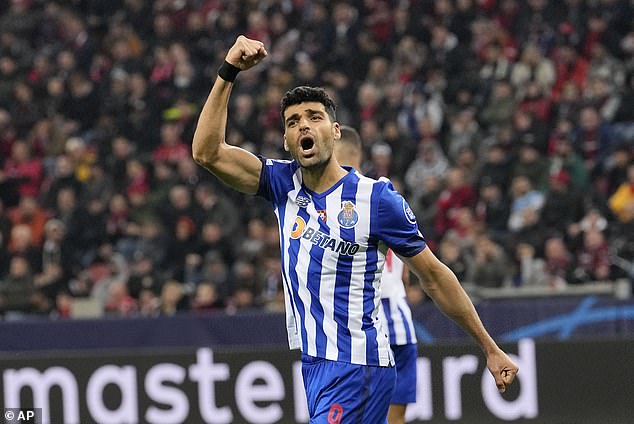 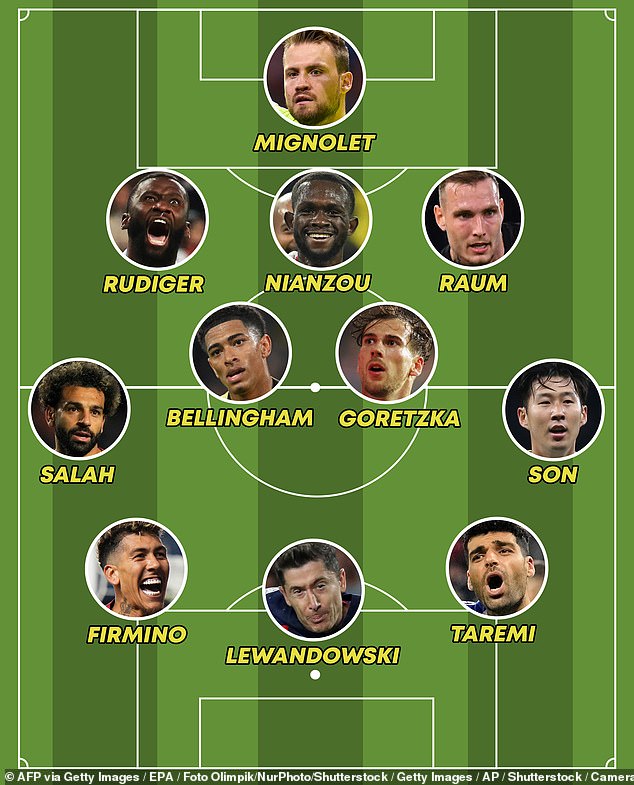