Edinson Cavani ‘has decided to LEAVE Manchester United and fulfil his boyhood dream of playing for Boca Juniors this summer’, just five months after arriving at Old Trafford… and veteran striker will take a huge pay cut to push through move

Edinson Cavani wants to leave Manchester United after just a season at Old Trafford and return to South America this summer, according to reports in Argentina.

Ole claim that the veteran striker has his heart set on a move to Boca Juniors, despite having the option to extend his contract with United by an extra year.

Cavani signed a deal until the end of the season when he joined United on a free transfer last October, having left PSG at the end of his contract. 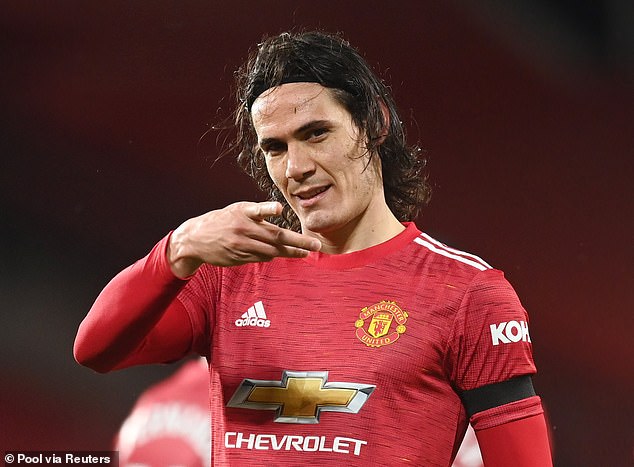 Edinson Cavani has decided to leave Manchester United this summer, according to Ole

But after just five months in England, it is now being claimed that Cavani wants to fulfil a boyhood dream by seeing out his career at Boca.

The Argentine giants have shown interest in signing him in the past, with Ole previously reporting that Cavani had told club president, Juan Roman Riquelme, that he would join in the future.

The 34-year-old is said to have asked the club who his team-mates would be next season, as well as asking for assurances that they could make signings to challenge for the Copa Libertadores title.

It is claimed that Cavani’s representatives do not believe his possible contract extension at United will be an issue because it is not automatically triggered. 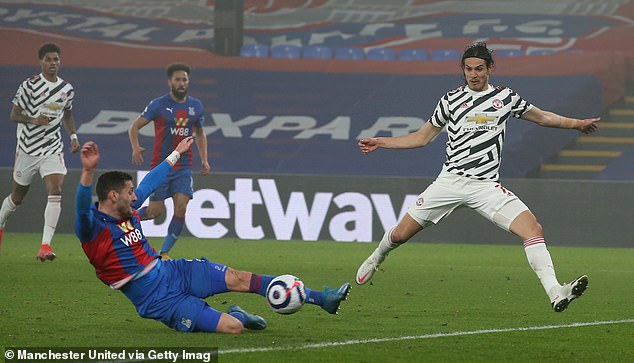 The former Napoli star has been a useful addition to Ole Gunnar Solskjaer’s squad this season, scoring seven goals in 25 appearances. He has started only 11 games for the Red Devils in all competitions.

Ole claim that Cavani is willing to take a huge cut on his £210,000-a-week wages to ensure the move goes through smoothly.

According to the Argentine newspaper, the veteran will demand a three-year contract worth the equivalent of what he would earn at United in a single season.

‘Unless there’s a mistake, that’s it,’ an unnamed member of Cavani’s entourage is quoted as saying. ‘He’s decided to return now. And he has decided that it’s Boca.’

The Uruguayan forward is said to have dreamed of playing for Boca Juniors since he was a kid, and is now keen to return to a more rural way of life in South America.

Should the move materialise, Solskjaer would be left with Anthony Martial, Marcus Rashford and Mason Greenwood as options up-front.

‘Teddy came in 1997 with his experience and I learnt a lot from him. I think he [Edinson Cavani] has come in and almost been a similar type of influence,’ Solskjaer told Sky Sports. 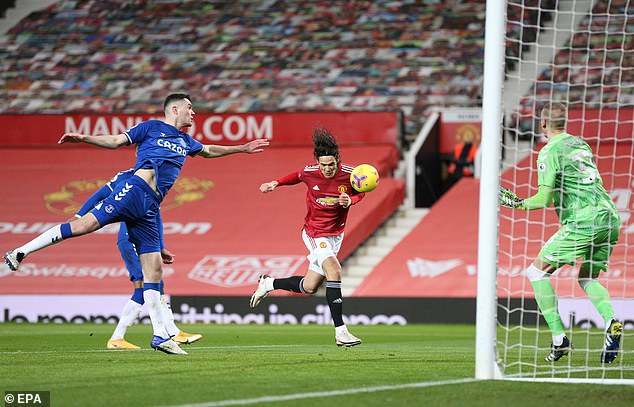 Cavani scores with his head against Everton, one of seven goals since arriving at Old Trafford

‘We were young strikers learning off Teddy, now Cavani has Mason, Marcus and Anthony learning off him. Edinson has been a great addition.

‘He [Cavani] leads by example, he goes about his job professionally.

‘It’s his passion, he loves football, he loves working hard for the team. It is never “me before anyone else”, the team is always first.

‘If he makes a mistake he is the one who is always trying to make up for it. If he makes a run to the near post and misses he will do it again and again. He believes in what he has been doing his whole football life.’