Carson Pickett made history for United States football on Tuesday when she became the first ever player to appear with a limb difference.

The left-back, who plays for the North Carolina Courage in the National Women’s Soccer League, was born without a left forearm and hand.

Appearing for the USWNT for the first time, Pickett was part of a side that laboured to a 2-0 win over Colombia in a pre-World Cup qualifier friendly.

U.S. coach Vlatko Andonovski said after the game: ‘Carson did very well in training for us in last week and with the management of minutes for Emily Fox that we had, we felt like Carson would be a good replacement.

‘I’m happy that she was able to perform well for 90 minutes.’ 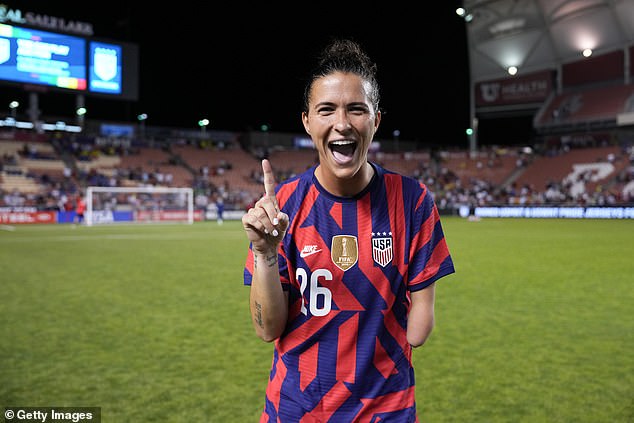 In 2020, the Washington Post noted, she partnered with Nike in creating a boot that did not require laces to be tied.

She told CBS at the time: ‘My parents have two hands and two arms and unfortunately they weren’t able to teach me how to tie my shoes.

‘I can imagine that it does feel heartbreaking, looking at your daughter and trying to tie her shoes and it’s hard for you to be there for her.

‘There were definitely times where I cried, and just couldn’t figure it out, and they kept pushing me. Tying my shoes was almost impossible, it did seem impossible, but I overcame it.’

The USWNT begin their World Cup and Olympic qualification process next month when they travel to Monterrey, Mexico, for the newly organised CONCACAF championship.