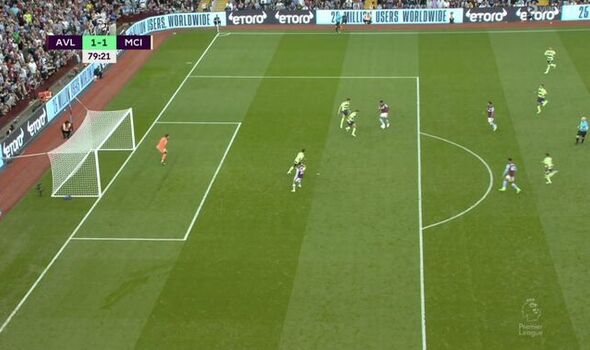 Jamie Carragher questioned why Philippe Coutinho had a goal disallowed in Aston Villa’s 1-1 draw with Manchester City. Coutinho fired home a stunning strike late in the second half but VAR did not intervene when it was ruled out for offside.

Ollie Watkins was adjudged to have been offside before Coutinho slammed home – but the England forward was later shown to be onside. The goal did not stand and VAR did not intervene.

Commentating for Sky Sports, Carragher said: “It wasn’t an issue I thought, Ollie Watkins… but you just see Philippe Coutinho at the bottom  of the screen that pass there – he’s not offside. Man City have got away with one.

“Then the linesman thinks he’s come back from an onside there again. Is it because the whistle’s been blown beforehand [so VAR can’t intervene]? That is a major mix-up between these officials, it really is. That is a mistake. I wouldn’t want to be the man who tells Steven Gerrard after the game.”

VAR did not intervene in the aftermath because referee Simon Hooper had already blown his whistle. The assistant referee had flagged for offside against Watkins, prompting Hooper to halt the match.

But assistants have been advised to keep their flags down until the phase of play has ended. That is because if a goal is scored, the build-up can be retrospectively reviewed by the technology for the possible offside.

The assistant was too hasty in raising their flag, and Hooper should not have stopped the game.

It comes on a day of contentious decisions in the Premier League. West Ham raged after they were denied a late equaliser against London rivals Chelsea, with midfielder Declan Rice slamming VAR and boss David Moyes accusing goalkeeper Edouard Mendy of ‘faking’ an injury.