Tim Cahill’s soccer career was punctuated by headed goals but he supports more research into any connection between heading the ball and brain injuries.

But the retired Everton and Socceroos star doesn’t want authorities to jump too soon into making drastic changes to how the game is played. 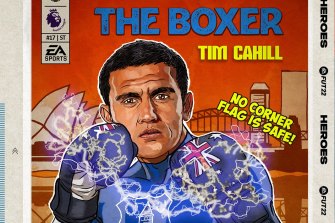 Cahill spoke to The Age and the Sydney Morning Herald this week while promoting the release of the FIFA 22 video game, where he is making a return as one of the game’s heroes.

While contact sports such as the rugby codes, gridiron and Australian rules continue to make changes to their rules and practices regarding head injuries, the true impact of heading the ball is still being worked out.

An English charity played a senior game last weekend where heading was only allowed in the penalty box.

Cahill works as chief sports officer for the Aspire Academy in Qatar, which has developed 20 national team players, and he says junior players need to be protected.

“We need to make sure we are cautious of protecting children because [head injuries] are in every sport, not just football,” Cahill said.

“My advice would be to always be overcautious. Heading is a massive part of my game and my practices but I always support more study into protecting children and injuries.

“It’s not only in football, it’s sport. Heading is not [just] heading the ball, it’s contact. So you can talk about rugby, talk about tennis if that ball hits you in the head.

“It’s all contextual and it’s a conversation that needs as much information as possible to have a positive outcome.”

Cahill has received his UEFA A coaching licence, spending time back at Everton under former boss Carlo Ancelotti and a stint as assistant manager to the Toffees’ under-16 side during his studies.

But he isn’t rushing into coaching.

“They say throw yourself in the deep end and live it and learn it, but I’m very structured and detailed,” Cahill said.

“I don’t like to do anything unless I know everything, just like I was as a footballer.

“I’m not in a rush. I’m enjoying being with my family in Qatar and being a part of different projects like the World Cup, Aspire Academy, the national teams and the executive side of things and some diplomas I’ve almost finished – that and just chilling out.

“I can stay up until 2am playing FIFA with my boys, one who is in England and one here with me, if he doesn’t have training the next day, then it’s just my wife on our case.”

Cahill credits former Socceroos coach Ange Postecoglou for inspiring him to go into coaching, and believes the Celtic coach is breaking new ground for Australians in Europe.

But Postecoglou is also under pressure – injuries and poor form have hit the Scottish side in recent weeks.

“I don’t know a fan that doesn’t get jumpy when they lose or question their manager, it doesn’t matter if it’s Barcelona, PSG or Man United – all the biggest clubs. You can sign the biggest players, it doesn’t guarantee wins or trophies.

“But the one thing about Ange is his heart is in it, and they see it and love it. That is all the Celtic fans want. They are passionate and they see someone who is fighting for the badge.

“That’s something that has always brought me very close to Ange, he really cared for Australia and he gave it everything. In the end, he didn’t come to the [2018] World Cup and that was a massive loss for us.”

Cahill said he keeps in touch with Postecoglou and his tenure at Celtic was a huge development for Australian soccer. 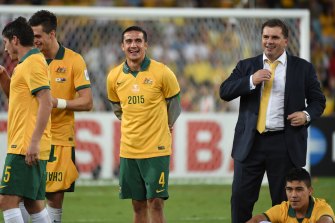 “He’s one that got me excited to coach, I’ve never worked for anyone as detailed as him and the way we were playing in those four years was incredible, there wasn’t many teams that we didn’t dominate in possession.

“He’s a big mentor and he goes about his business quietly, it doesn’t matter if people are for it or against it. He always makes waves and he’s doing it now in a fantastic way.”

Socceroos on track for World Cup

The Socceroos are playing some “home” World Cup qualifiers in Qatar due to COVID-19 travel restrictions in Australia and Cahill said the team received “red carpet” treatment during their stays.

The team has won its first two qualifiers but has two difficult games coming in the next month, hosting Oman in Qatar and then visiting Japan.

“Qualifying for the four World Cups I played in wasn’t easy, if anything, the last two were the hardest,” Cahill said.

“If we paint the picture for them, you go straight off the tarmac [in Qatar] to the hotel, first-class treatment, and you play in an air-conditioned stadium against another team that has to do the same thing. So it’s a level playing field.

“They’ve got a massive opportunity and the main element is consistency – it’s all about winning when it counts and I’m pretty sure they can do that.”

‘A beast’ in defence

NBA basketballers are known to wait for the release of their player rating in the NBA 2K video game series and then complain about it on social media.

Cahill said he was proud to return to the FIFA 22 game and to have his trademark goal celebration, boxing the corner flag, included.

But Cahill, who has an overall rating of 85 (99 is the maximum), was happy with a high rating for header accuracy, though he couldn’t resist questioning his low defensive rating.

“If you’re talking about defence, it’s 62, but everyone knows I was a beast when it comes to defending – I pretty much defend better than I attacked because it was a big part of my game,” Cahill said.

“I don’t worry about things like that. I take it as a compliment that as an Australian, I’m in the game and representing Asian football and my country.

“I’m past it but still relevant, which is amazing.”