Burnley 1-1 Sheffield United (5-4 on pens): Clarets through to the next round following penalty shootout after David McGoldrick’s early goal was cancelled out by Matej Vydra

Nick Pope was the shoot-out hero as Burnley progressed into the Carabao Cup third round – although a 5-4 victory over Sheffield United on penalties following a 1-1 draw was soured by an injury to Johann Berg Gudmundsson.

After David McGoldrick’s early strike was cancelled out by Matej Vydra midway through the second half, Pope got down low to save Oli McBurnie’s spot-kick and Burnley were clinical in netting all five of their efforts.

While they booked a third-round date against Millwall, a Burnley side already low on numbers had a setback as Gudmundsson was stretchered off the field following a nasty first-half challenge from Jack Robinson. 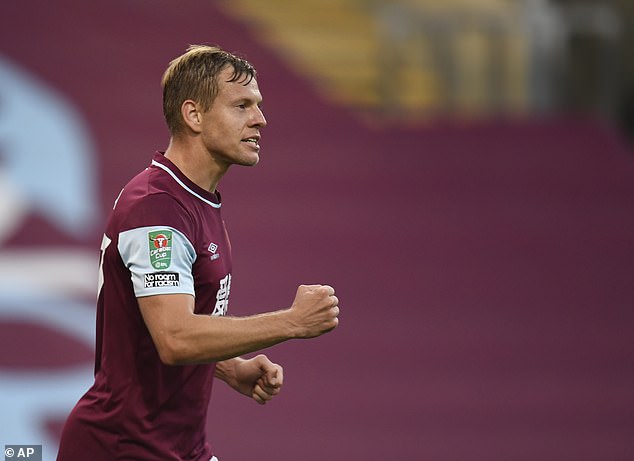 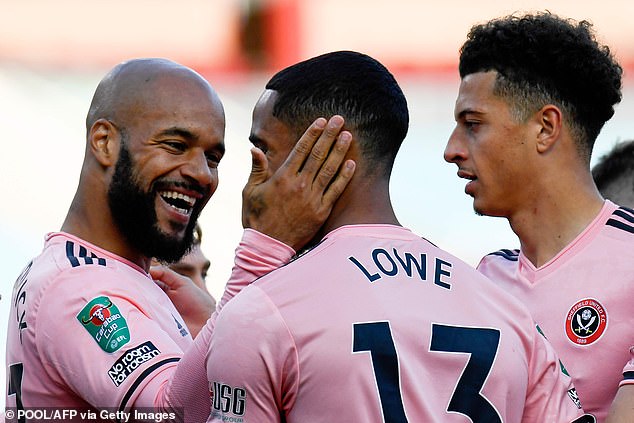 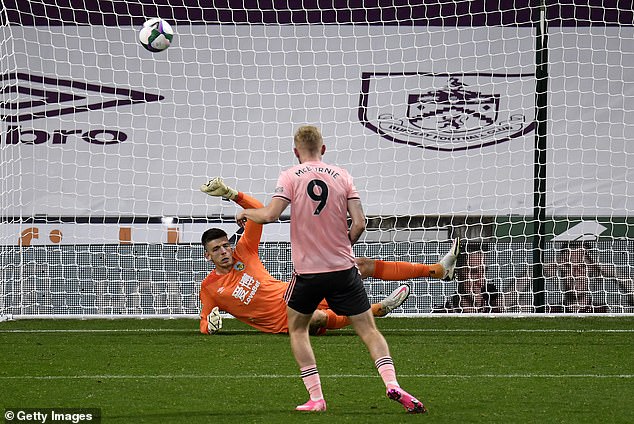 Gudmondsson was restricted to 13 appearances last season because of hamstring and calf concerns and he could be set for another stint on the sidelines, while the issue overshadowed James Tarkowski’s omission due to a toe injury.

Tarkowski has been the subject of three failed bids from West Ham, with Leicester also allegedly interested, but Dyche took no risks with his centre-half ahead of their first Premier League fixture against the Foxes on Sunday.

Debutant Jimmy Dunne took the place of Tarkowski, while only Oliver Norwood retained his place from the Sheffield United side that opened their top-flight campaign with a 2-0 defeat to Wolves on Monday. 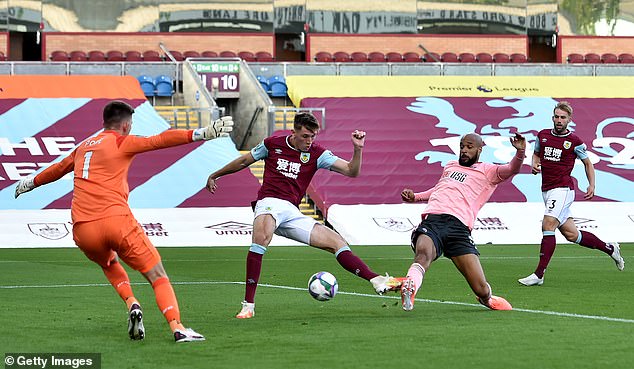 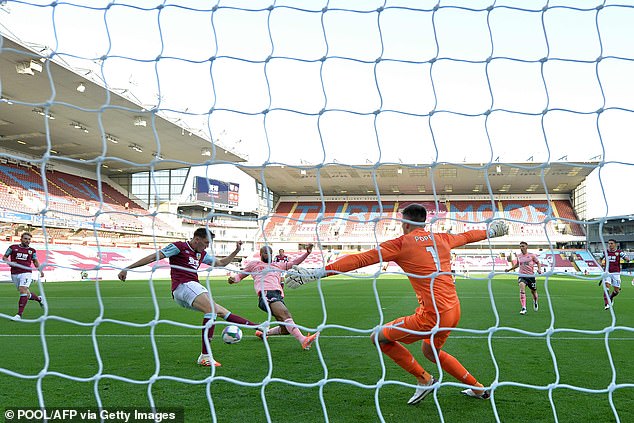 Max Lowe was one of four summer signings who started and he marked his Sheffield United bow with a fine, low cross that was turned in by a stretching McGoldrick as Burnley were caught cold in the fourth minute.

The home side were dealt another blow on the quarter hour as Gudmundsson was stretchered off in some distress after being caught high on the leg by Robinson following through from his clearance.

Burnley had plenty of possession and looked threatening when the ball was whipped into the area, but it was Pope who was pressed into action, punching away to stop Phil Jagielka heading in Norwood’s free-kick. 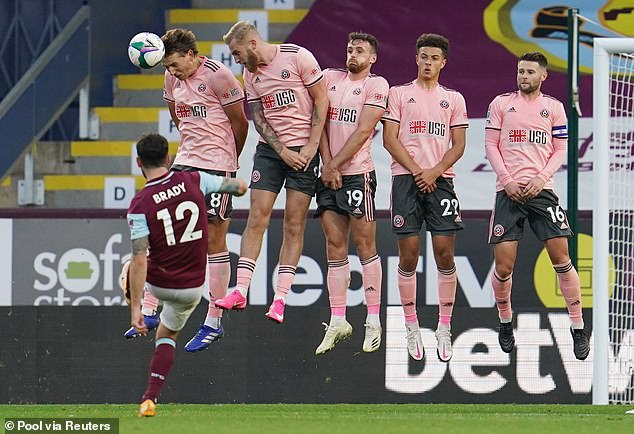 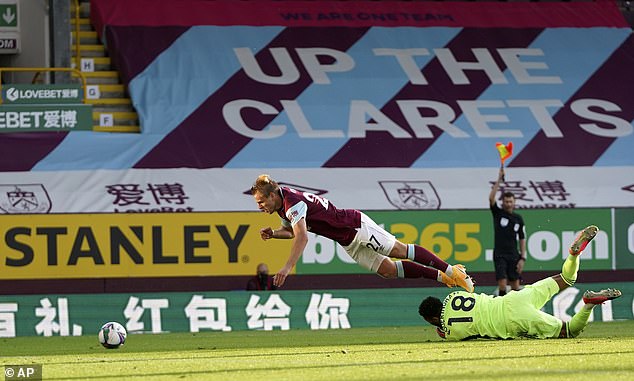 Wes Foderingham gets down low to deny Burnley’s Vydra, who was offside anyway

An offside flag spared the blushes of Wes Foderingham after he hauled down Vydra in the area, while the post next came to the rescue of the visiting goalkeeper shortly after half-time as Robbie Brady fluffed his lines.

But there was no denying Burnley in the 67th minute as Ashley Westwood’s cross was cleverly chested by Jay Rodriguez into the path of Vydra, who lifted over Foderingham.

The leveller seemed to bring the Blades back to life as McBurnie shot into the side netting and the substitute instinctively turned Lowe’s scuffed strike goalwards, with Pope reflexively keeping out.

Pope then provided the standout moment in the shoot-out, where Chris Wood, Vydra, Josh Brownhill, Erik Pieters and Brady all found the back of the net as Burnley claimed only their second win in this competition since 2014. 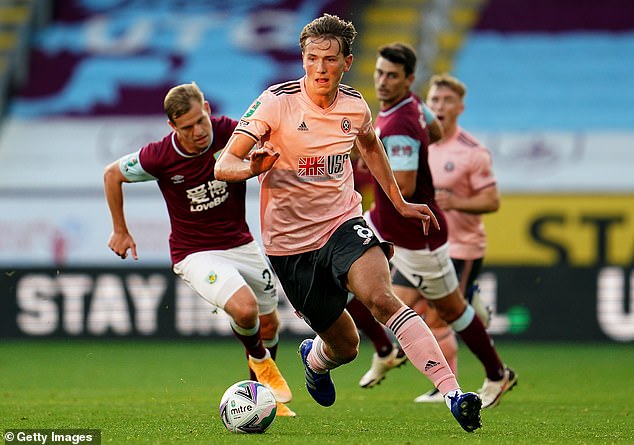 Sander Berge of Sheffield United runs with the ball, under pressure from Burnley’s Vydra 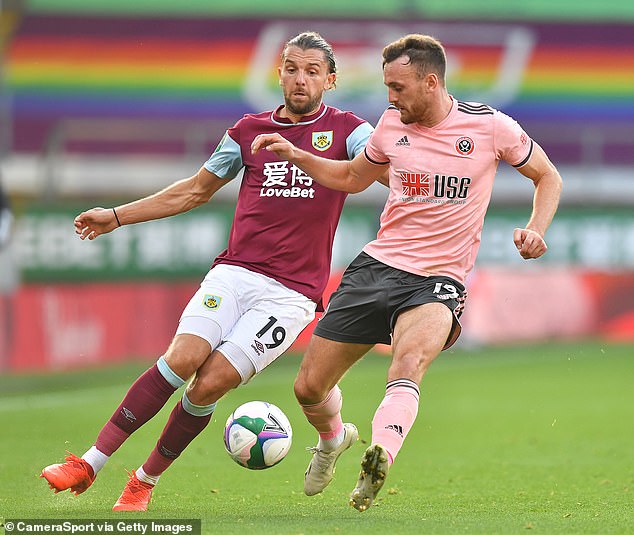 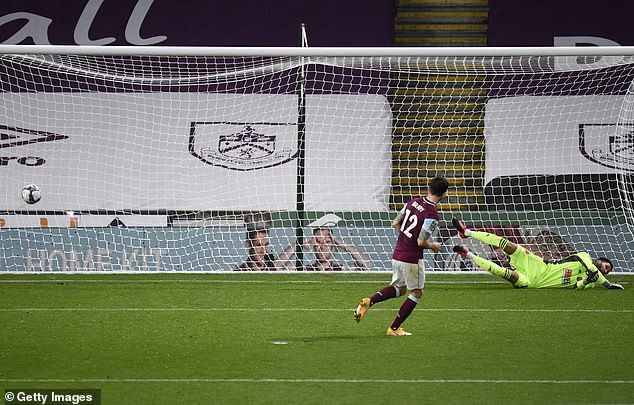