They will tell you that Brentford is a model club. After a season like this one, when they climbed back to the top flight of English football for the first time in 74 years, building up from humble beginnings to become the 50th club to grace the Premier League, who are we to argue?

The story is well-worn, as it is with all teams bestowed with the tag of “model”. When you win a play-off final, as comprehensively as you can win 2-0, against a Swansea City side who have done a lot right this campaign, there is always scope for extra mayo on the details. But it’s worth going over them once more.

Matthew Benham, a gambler by profession, came to football wary that the odds were too chaotic. But when a trader sees chaos, he also sees opportunity. In a volatile market, he knew the best chance for success resided within the valleys amid the peaks and troughs.

In Rasmus Ankersen, he found a like-minded individual who looked upon football with a similarly furrowed brow. The Dane’s background as a former footballer for FC Midtjylland before injury shifted his ambitions to coaching and, then, broader thinking, led to a meeting of outlooks between him and Benham. Ankersen became chairman of Midtjylland and soon Benham, boyhood Brentford fan turned owner in 2012, was an investor in the Danish club. The rest, as they say, is history.

Without Benham in charge and Ankersen installed as a co-director of football, perhaps the door would not have been opened to Thomas Frank. At the time of his employment as Brentford assistant coach at the end of 2016 was more revered for his youth work in Denmark.

They could have gone down the usual route and pulled the pin on Frank after he lost eight of his first 10 games after becoming manager in October 2018. As Ankersen said last year, a manager’s shelf-life averages out at 16 months: too short to determine between coincidence or competence. Whatever questions on the latter, they knew the sample size was too small to judge.

And this is where we come back to football. Because, sure, this story is about a club that bucked the trend. A second-tier outfit who knew the promised land was within reach but didn’t shirk the hard work by looking for quick fixes and, in a way, chose the longer route. A club that made good money from player sales and invested it shrewdly and sparingly.

Their shortcomings when they fell at this exact stage 10 months ago to Fulham might have been sweetened in the eyes and pockets of other owners by the £60 million they picked up from the sales of Ollie Watkins and Said Benrahma. The outlay of just £6m on Ivan Toney, whose opener from the penalty spot made it 33 goals in all league-related matches this season might have certain fingers rubbing with profits present and future.

But the beauty of the Brentford project is perhaps carried most in last season’s failure. Not only did they fall at the very last hurdle, but they did so after finishing just two points off automatic promotion. Such is the Championship that by falling as short as they did, they arrived into 2020/21 as marked men.

Even with the losses of key personnel, the scope among the rest of the league and beyond was on them fiercer than usual. Partly to witness any fall, but also because they knew this wasn’t going away in a hurry. It didn’t: another third-place finish, this time four points off second. Really, to have done that at all, even if it had ended in bitter disappointment on Saturday, would have been a triumph in itself. Not so much from a football point of view. But of a surefire sign that the algorithms, recruitment, and execution were robust.

“Last year, there was no real expectation to us from the beginning of the season,” said Frank. “This year, there was. So we needed to handle that on top of everything – the mental side of being one of the top teams that everyone fears and there’s the pressure on us to do well this year.”

This, arguably, is where Frank came into his own. Yes, football is unpredictable by its nature, but nailing controllables require a human touch. And it takes a man who sees people as human beings rather than muscle-bound embodiments of sinewy muscles and statistics to lift, inspire and lift and inspire again. 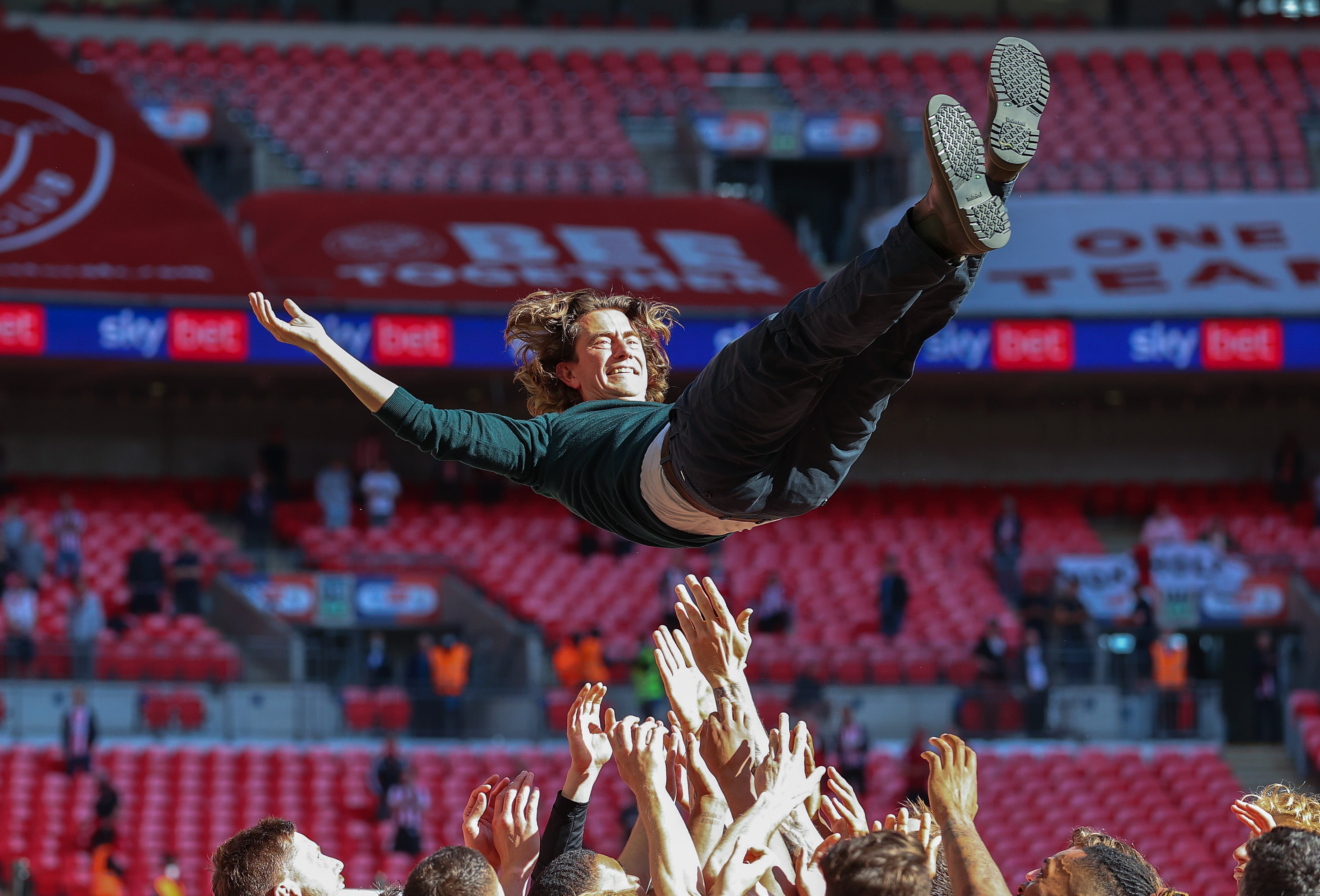 Of course, he sees it all. He made a point of arguing against the table right to the death, even pointing out that Brentford’s clean sheet at Wembley was no surprise considering they are one the lowest for expected goals conceded and opposition touches in their box. Sometimes, he says, the table and its columns do lie.

The importance of a personable disposition was laid bare on Saturday when Emiliano Marcondes bust a lung to finish the counter-attack that made it 2-0. It was only the 20th minute, but the endeavour to run the length of the pitch – he was not the only one – ensured the game was settled then and there.

“I think it’s a fantastic story about him,” said Frank of Emiliano in the last of his media engagements, as afternoon turned to evening. “He struggled to find his feet in the club, mainly because of injuries. This year, I was never in doubt that I wanted to play him in the final. I just know he will turn up in these games and he’s got a fantastic mindset.”

“I’ve known him since he was 15 years old in Denmark. We are coming from the same city in Denmark as well. I admire him a lot.”

The other aspect of this story is that, really, it is quintessentially Brentford. Because if it wasn’t, how real would this be? How *could* it be?

There certainly would not be the plethora of former players in the stands at Wembley. Marcus Bean, a midfielder who last played for the club in 2012, was cheered at between his own celebrations. His seat near one of the exits acted as a pitstop for the revelries that spilled out onto Wembley Way and back into the heartlands of Hounslow.

Mark Warburton, who led Brentford into the Championship in 2014, was on media duty for the game and was kept just as busy by the countless thumbs up and “thanks mate” he had to dish out as supporters clocked his presence in between both media boxes. One fan was able to navigate the MC Escher stairs that led up to the restricted zone and get a photo with the man himself. “You helped,” he said, throat croaky and yet well-oiled. “That’s very kind,” quipped Warburton as the fan went away. “He did a fair bit,” he joked, turning to the person to his right and gesturing towards Frank. 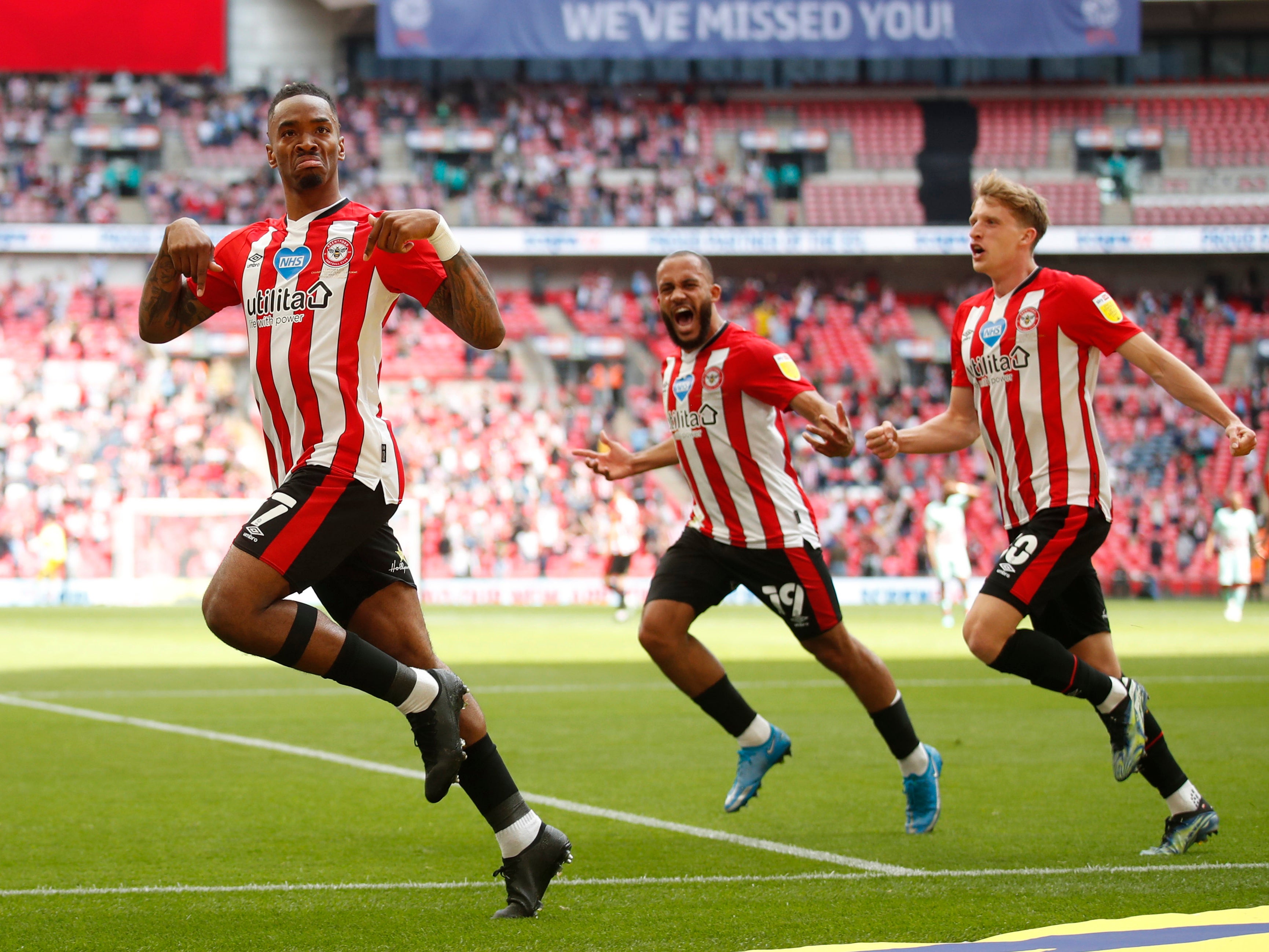 And maybe Frank gets it, too. Amid his many press briefings after the full-time whistle, one message was constant: “I just want to get so drunk tonight.” He spoke of wanting to crawl around the old Griffin Park and its pubs on all four corners. Perhaps he’d be coaxed further down to the road to the boozers that await towards South Ealing.

He’ll have time, no doubt. He may have frequented them on Saturday night. Certainly he’d had his share by the time he’d sat down with the written press, towel around his shoulders soaking up the majority of fizz and pop that missed his mouth from players who were aiming for anything but during a handful of mid-interview raids.

“My body was painful for a week because I wanted it so badly with these players,” said Frank. Evidently, they wanted it badly for him, too, and yearned to celebrate with the man who guided them through the hazardous terrain of the Championship season again, and again, and again.

Of course, a Swansea win and Sunday is a very different day. Frank probably still drowns his sorrows but does not wake up to begin planning for the Premier League as he said he will. The vultures would no doubt circle for Toney, Bryan Mbeumo, Rico Henry and Jay DaSilva, as they did when the enticing flesh was pecked at last year.

The discourse will have been oh so different. Can you really turn your back on the game’s perceived wisdom and get away with it? Maybe even, “hey, this is what you get when you try to be too smart”. Don’t try and be better than football, because football will get you in the end. Cards on the table – this is probably a very different article if they had lost.

And in that regard, maybe we should be grateful to be waking up in this world – in Brentford’s world. One where we can seek inspiration and do things differently. Sincerely and, perhaps, more honestly.

This isn’t a lesson just for football. Frank was certainly not in the mood to use this platform to deliver sermons. He knows tougher times draw harsher judgements in this industry, as they will for Brentford when they start the 2021/22 Premier League season as favourites for relegation. But his view was clear: this isn’t a story against the norm. This was encouragement to all and sundry that there are many different ways to be right without having to worry about not being wrong. 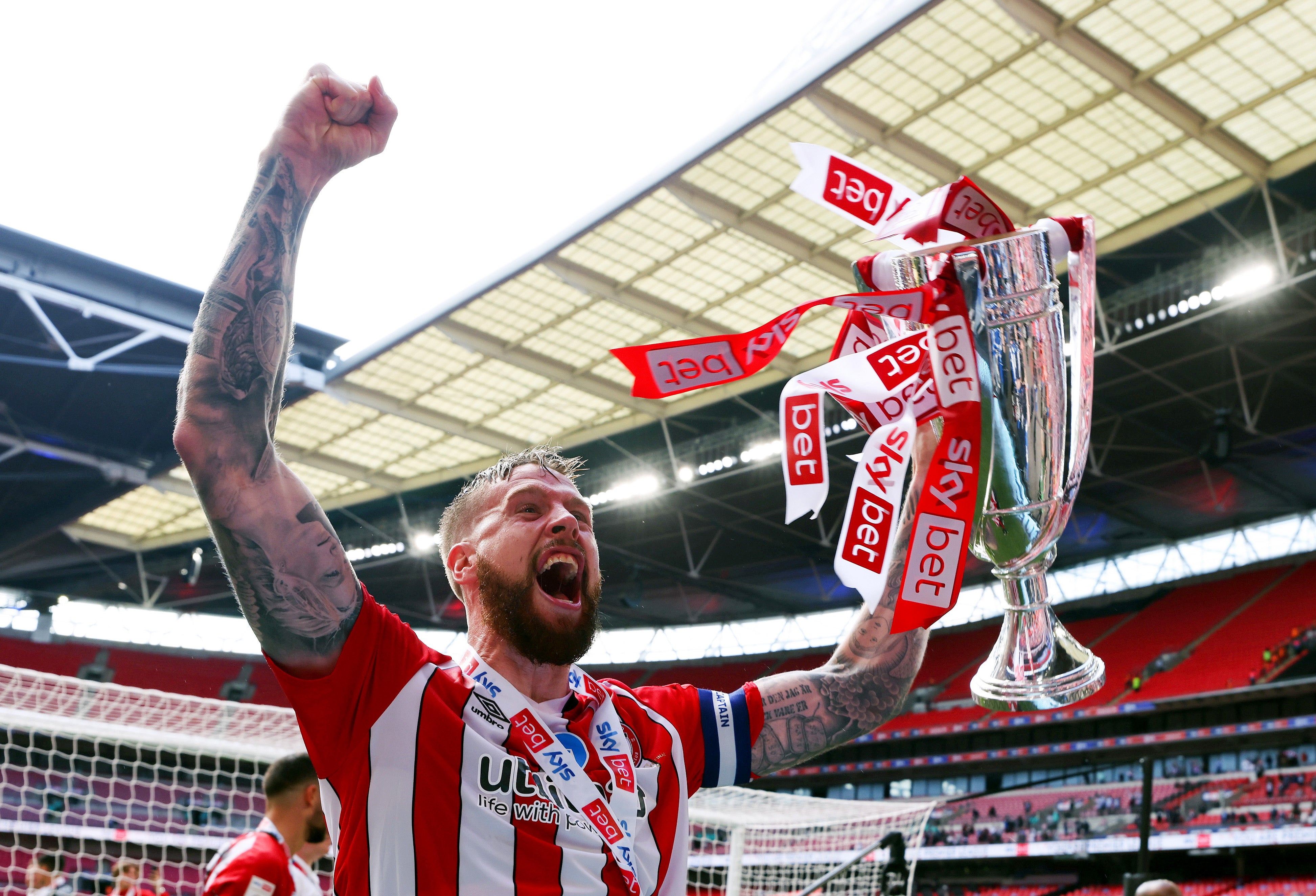 “It’s going to be extremely important that we stick to that (their current ethos), and I’m not in doubt that we will. We will be calm, with a clear strategy.

“To be able to be part of this and play my role, of course I’m very proud of that. And also because I really, really walked the hard way. I was coaching since I was 20, from under-8 to now the Premier League. The only thing I hope is that can now inspire a lot of coaches that the dream about helping people and to be better persons and players.

“I think the journey the club has been on has been absolutely remarkable. There should be a lot of clubs out there dreaming. Everything is possible if you work hard, have a clear strategy, top attitude and togetherness. I think then everything is achievable in the world.”

The rarity is not in Benham, Rasmussen, or Frank. But in believing you can do things differently if your heart and mind are truly invested. It is not a lesson unique to football. But it is one that has created a truly unique euphoria that only those associated with Brentford Football Club are experiencing right now.