Barnsley ended Brentford’s 21-game unbeaten run and denied them the chance to return to the top of the Sky Bet Championship with an ill-tempered 2-0 win in west London.

Goals from Conor Chaplin and Carlton Morris inflicted the Bees’ first defeat since the end of October.

Chaplin opened the scoring after 13 minutes when he arrived late at the far post to slot home Callum Brittain’s right-wing cross, as the home defence watched.

Morris stretched the visitors’ lead two minutes after the break when he fired home off the post after Bees defender Ethan Pinnock failed to deal with Daryl Dike’s low cross. 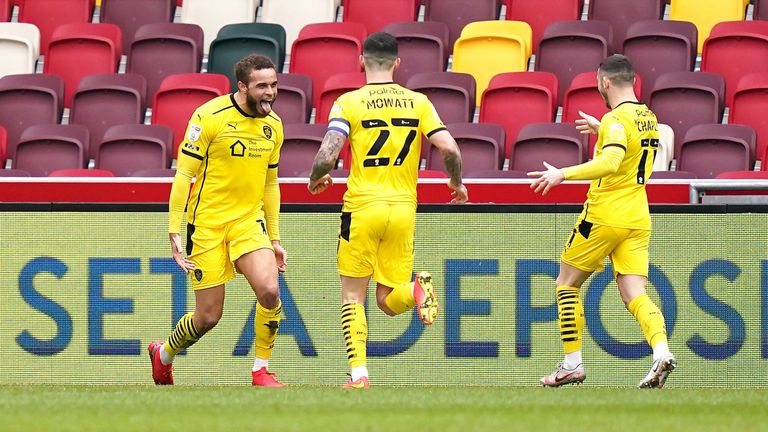 Barnsley started by far the brighter and won most of the early duels in a high tempo opening, and it was no surprise when they took the lead through Chaplin.

Josh Dasilva wasted a perfect chance to get the Bees back on terms but took aim only to fire Rico Henry’s cutback just past the right hand upright.

Michal Helik denied Ivan Toney on the half-hour with a decisive challenge to deny the hosts’ top scorer his first sight of goal from Bryan Mbeumo’s near-post cross.

At the other end Morris’ header forced Bees goalkeeper David Raya into a full-length save after a whipped cross from Brittain.

Minutes later Pinnock twice went close in a matter of seconds with powerful low drives but Tykes defender Dike blocked both before they could test ‘keeper Brad Collins.

Brentford struggled to combat the visitors’ high press in a first half that saw Barnsley drag their in-form hosts into a series of physical battles.

When Brentford did break free of the midfield shackles, they were restricted to half-chances by a side intent on disrupting the hosts’ rhythm.

Brentford came close to going in level at the break. Sergi Canos played in Saman Ghoddos, whose powerful low drive was parried to safety by Collins.

Within minutes of the restart Thomas Frank’s side had a mountain to climb though as Morris’ first goal of the season gave his side a two-goal cushion.

And second-half substitute Victor Adeboyejo almost added to the Londoners’ woes with almost his first touch after coming on, volleying just past the angle.

Toney had a strong penalty shout waved away after a Helik shove in the box, but referee David Coote – who offered the Bees top scorer little protection all afternoon – waved away the protests.

A quick counter-attack found Canos, who cut inside on 66 minutes and fired in a low drive which Collins fumbled – but the ball would not drop to one of the onrushing Bees strikers.

It was the story of the afternoon for the promotion chasers, who might have ended up on the wrong end of an even heavier defeat had Cauley Woodrow converted a late breakaway chance.