Brazilian striker Bobo is set to return for Sydney FC on Sunday against Central Coast Mariners to provide a much-needed boost to the struggling Sky Blues.

The veteran centre-forward has overcome a six-week lay off due to a calf injury and will make his season debut in Gosford to bolster Sydney’s hopes of claiming their first league win of the campaign. 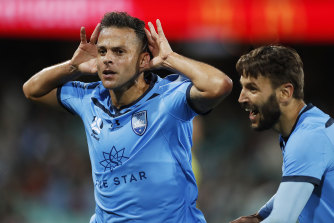 Sydney FC star Bobo is set to return for the Sky Blues against the MarinersCredit:Getty Images

While the 36-year-old has been given the all clear, Sydney FC coach Steve Corica is still weighing up whether to start Bobo or use him as a substitute as he eases him back into first-team football.

“He’d be on limited minutes whether he starts of comes off the bench tomorrow,” Corica said. “Obviously he’ll be a big help to us. It will probably take him a few games to get back to his rhythm but the sooner we can get him up to match minutes, the better for us. He’s a big part of how we play.”

While the return of Bobo is a major boost for Sydney, they will still travel to the Central Coast with a threadbare squad with a number of first team players in doubt to face the Mariners.

Fullback Rhyan Grant remains out after testing positive to COVID-19 during the week, while forward Elvis Kamsoba was deemed a close contact of a COVID case and had to undergo three days of quarantine. He’ll be allowed out on game day but has not trained all week. Midfielder Paulo Retre suffered a corked calf during Sydney’s midweek FFA Cup win over Macarthur, young midfielder Calum Nieuwenhof was struck down with gastro while Luke Brattan is out for the season due to an ACL injury.

“We’ve got a few concerns with injuries, sickness and Rhyan Grant out as well. We’re down to bare bones at the moment,” Corica said. “We’re doing it a little bit tough, obviously. That’s fine, we’ll get through this. We’ll come back stronger and we hope to get everyone back.”

Sydney are enduring their worst start in the league in more than a decade, a run that has been heavily compounded by their absences. Having been so successful in his first three years in charge, Corica concedes this is the most difficult test of his coaching career.

“It’s definitely the toughest because there are a lot of things happening around you that are out of your control,” he said.

Sydney’s coach is already looking at reinforcements to bring in when the transfer window reopens on January 14, targeting an experienced midfielder to replace Brattan. Corica hasn’t ruled out going overseas for that player with the club still having one visa player spot available on their roster.

“We’ve got one visa spot available so we are definitely looking in that position but there’s obviously limited time trying to find someone,” Corica said. “It’s difficult at this time of year to find the right player. Brattan will be back at the start of next season so whether we can get someone for six months, I don’t know. We’ll try.”