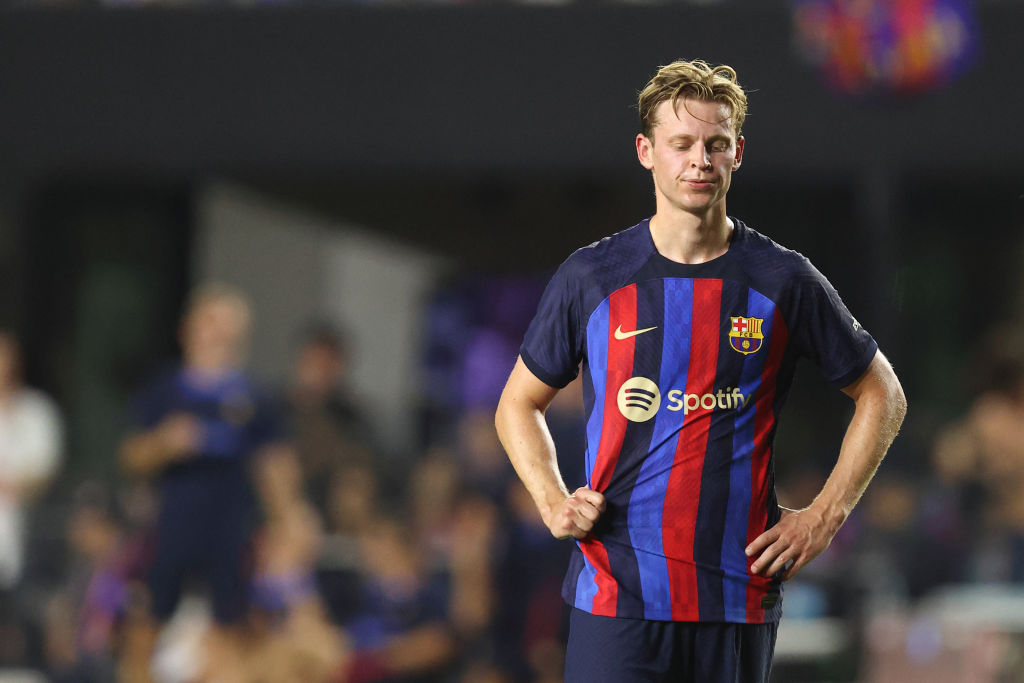 Barcelona manager Xavi has told Frenkie de Jong he must be prepared to ‘almost half’ his current salary if he wishes to remain at the club.

Manchester United have a broad agreement in place to sign the Netherlands international, who Erik ten Hag has made his top summer transfer target.

A fee of £63million with a further potential £8.47million in add-ons has been agreed with Barcelona reportedly informing de Jong they need to sell him in order to alleviate some of the financial pressure on the club.

The situation is also complicated by the fact the midfielder is owed €17m in deferred salary.

Publicly, Barcelona have maintained they do not wish to sell de Jong with club president Joan Laporta claiming on Sunday they have ‘turned down offers’ for the former Ajax star.

Laporta added more talks with de Jong were planned with AS reporting Xavi has once again met with the player to discuss his options.

Xavi is said to have explained the ‘harsh reality’ that if he wants to remain part of the Barcelona project, he must lower his current salary ‘by almost half’.

During the meeting, Xavi also told de Jong he intends to give him plenty of game time in positions away from his usual midfield role, having been deployed at centre-half in Barcelona’s last two friendly games.

The report adds that both Xavi and de Jong left the meeting ‘satisfied’, suggesting de Jong is open to making a huge financial sacrifice to ensure he remains at the Camp Nou.

The report also claims de Jong will now have the final say over his future.

United have been linked with a move for De Jong throughout the summer with ten Hag desperate to bring him to Old Trafford, having already secured deals for Christian Eriksen, Tyrell Malacia and Lisandro Martinez.

Chelsea have also expressed interest in signing De Jong as Thomas Tuchel looks to bolster his midfield options and improve on last season’s third-place finish in the Premier League.

Leicester City midfielder Youri Tielemans is reportedly one alternative option for United should they fail to lure de Jong to Manchester.