Lionel Messi scored four goals as Barcelona thrashed Eibar 5-0 at the Camp Nou and the most relieved man in the stadium was club president Josep Bartomeu, who faced a white handkerchief protest before the match with supporters all around the stadium chanting for him to resign.

Angry fans might forget about the club’s institutional crisis for a while after this big win. No wonder one early headline in Spain read simply ‘Messi President’. 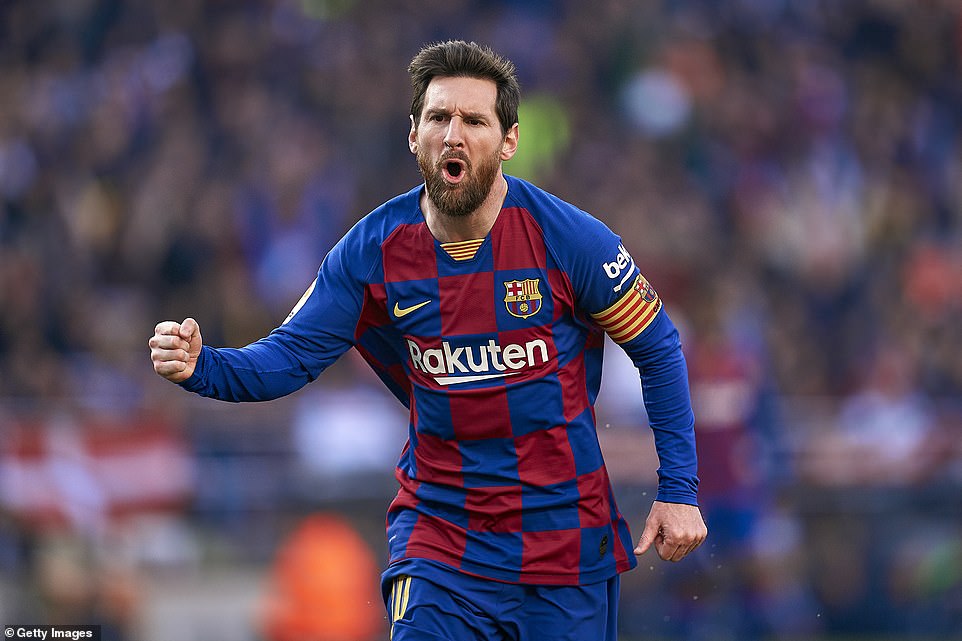 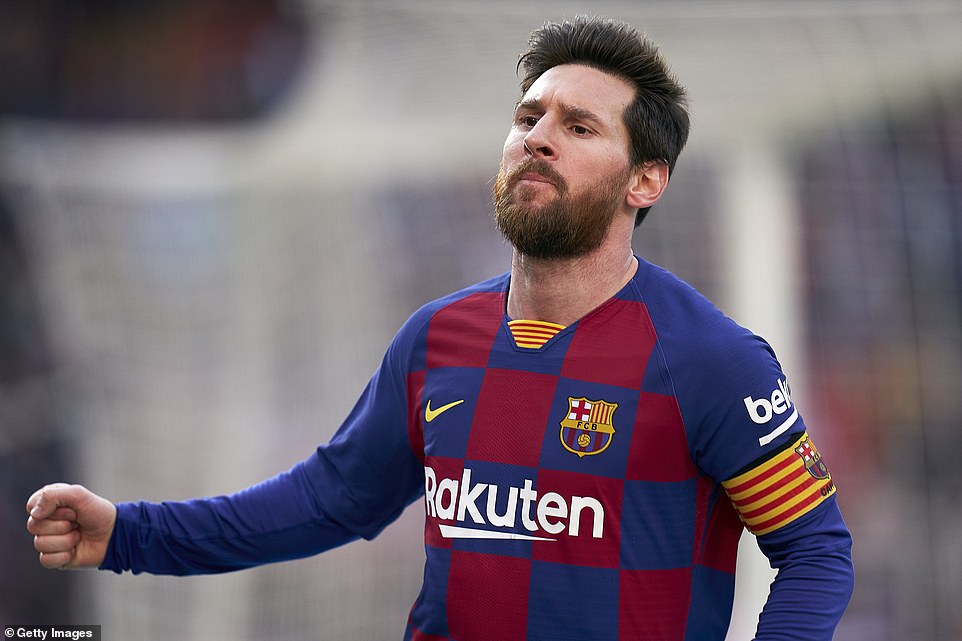 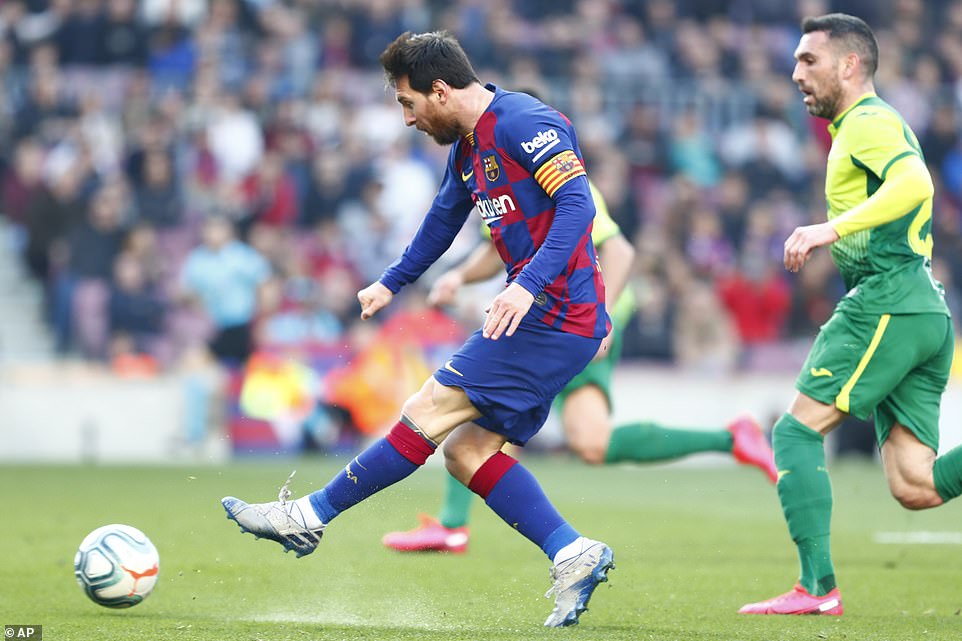 Beleaguered president Bartomeu is currently stumbling from one crisis to another with this week’s installment centering on accusations a firm employed by the club to monitor social media had been behind various online accounts smearing the reputation of certain high profile players and ex-players at the club.

Messi was one of those allegedly targeted and he said in midweek that it was a ‘strange situation’ but that the president had assured the players he knew nothing about it.

Messi let none of the off-the-filed nonsense bother him once the first whistle was blown and the spectators had put their white handkerchiefs away. 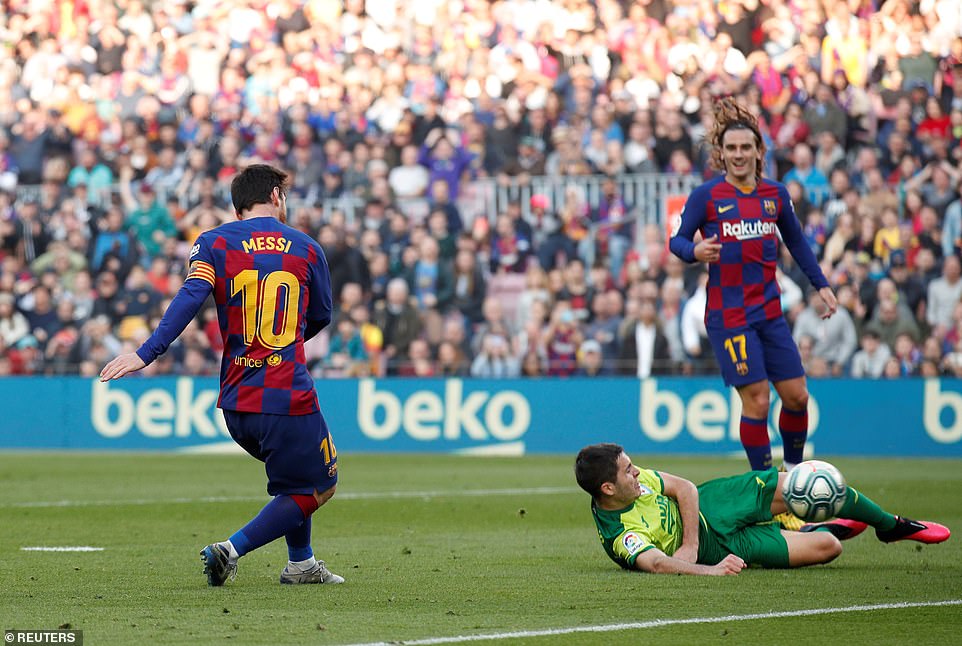 And after trying to set up Antoine Griezmann, who was tackled by Alvaro Tejero, Messi tapped in his third on the rebound 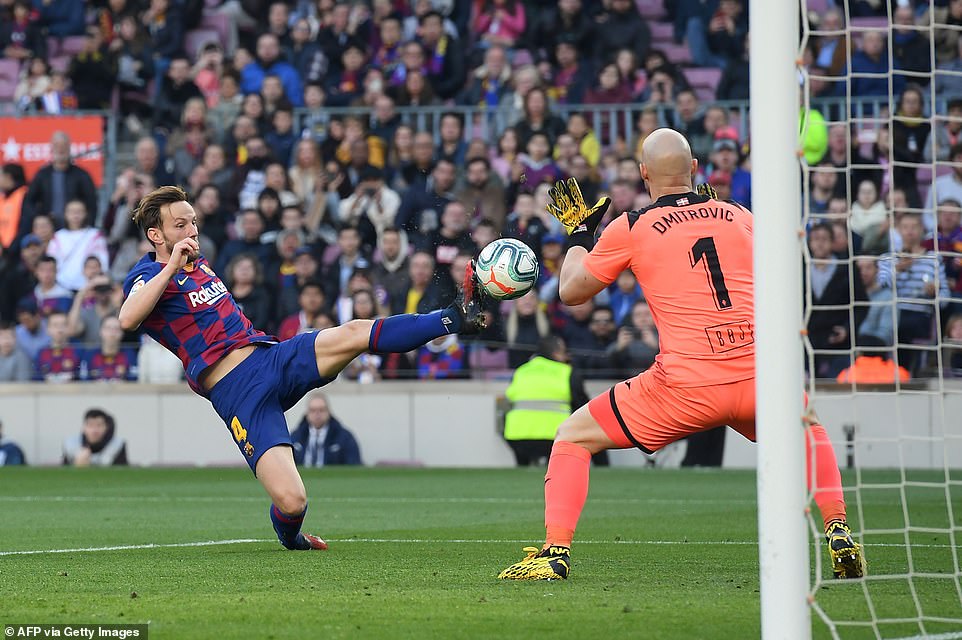 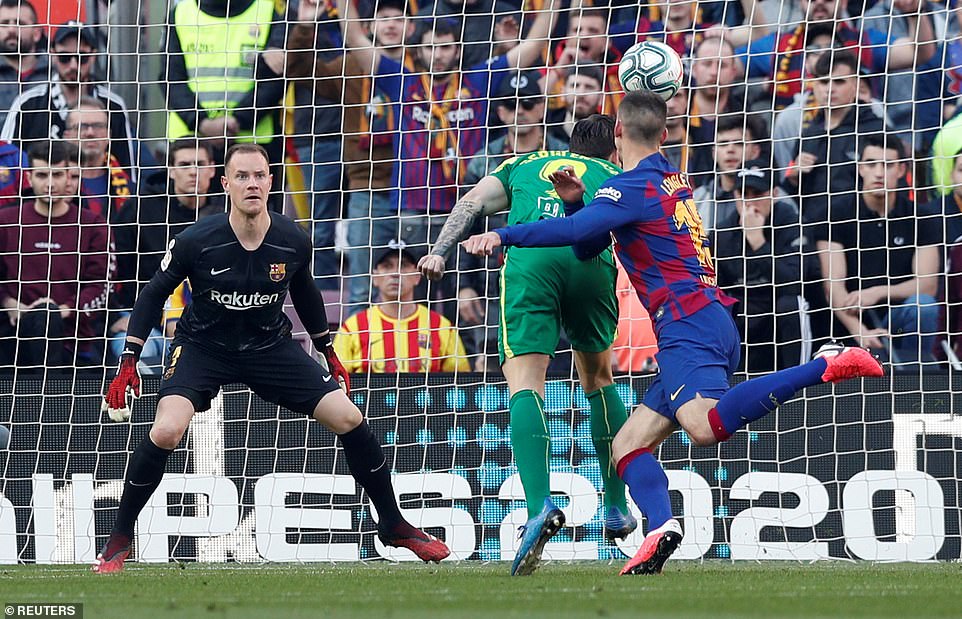 Eibar had a goal disallowed in each half, after Sergi Enrich’s header from Cote’s cross after five minutes ruled out for offside

He had not scored for four games but in 40 minutes he had scored his third hat-trick of the season and ended the match as a contest.

First he slalomed his way past three Leganes defenders on the edge of the area after running on to Ivan Rakitic’s pass.

Then he repeated the trick this time right-footed from Sergi Busquets’ pass. And five minutes before the break he scored again after trying to tee up Antoine Griezmann. The Frenchman failed to make the most of the gift assist but when the ball came back out to Messi he buried it. 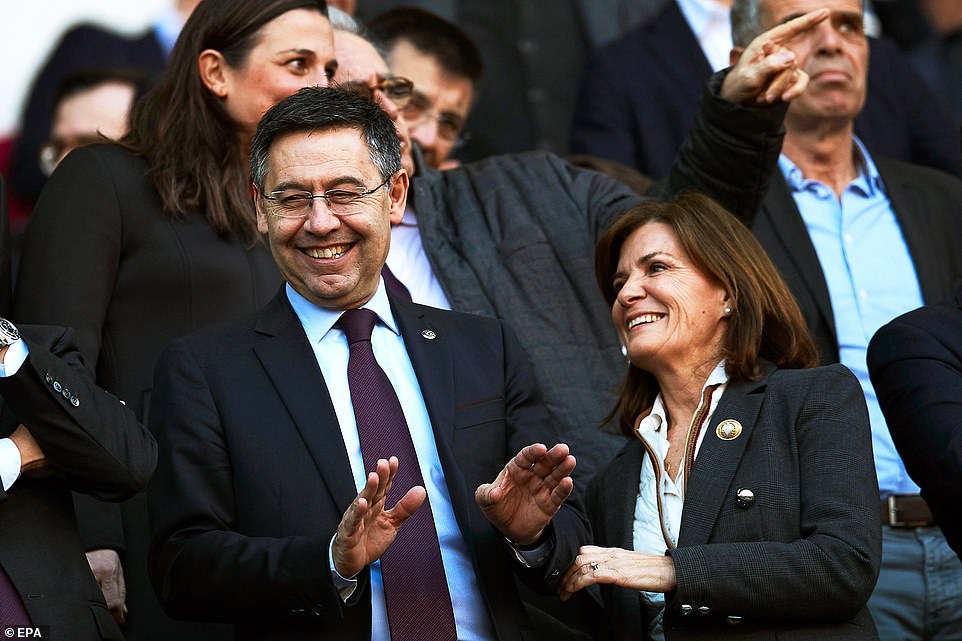 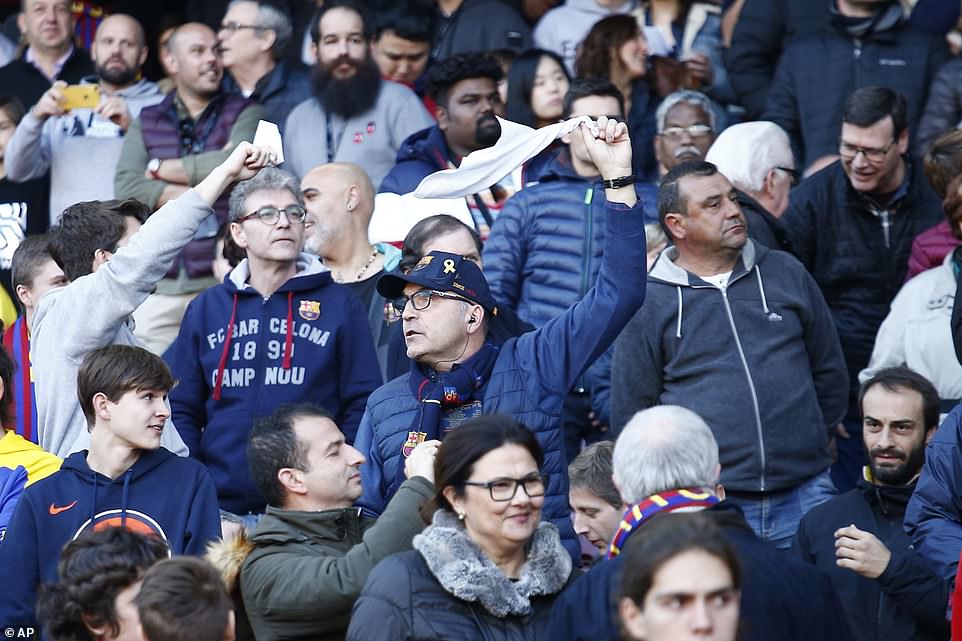 He might have added a fourth early in the second half but saw his free-kick just tipped over the crossbar. He did score a fourth and it came from a Braithwaite assist.

The new striker came on 72 minutes and sliced his first cross-shot wide but he soon found his feet. His cross was turned in by Messi for goal number four. And then, when his shot was only half saved by Marko Dmitrovic it was turned in by Arthur.

He showed pace and power pulling away from Eibar defenders and the Camp Nou seemed to warm to him with every touch. His impact might also serve as a warning to Griezmann who he replaced and who had not been at his best.

This is a huge week on the pitch for Barcelona with Napoli and Real Madrid looming on the horizon. Braithwaite cannot play in the Champions League but he could find himself playing a big part in the Clasico next Sunday having already shown he can link with Messi.

Speaking about his number 10 Quique Seitien said: ‘He is extraordinarily intelligent. He knows where to go to cause the maximum harm to the opposition.’

Messi now has 18 goals and is well on the way to winning the top scorer in La Liga for the seventh time in his career.

Of Braithwaite, Setien added: ‘He has done a lot more than we expected. I think he is going to adapt perfectly. He understands football and he is going to be a huge help to us.’ 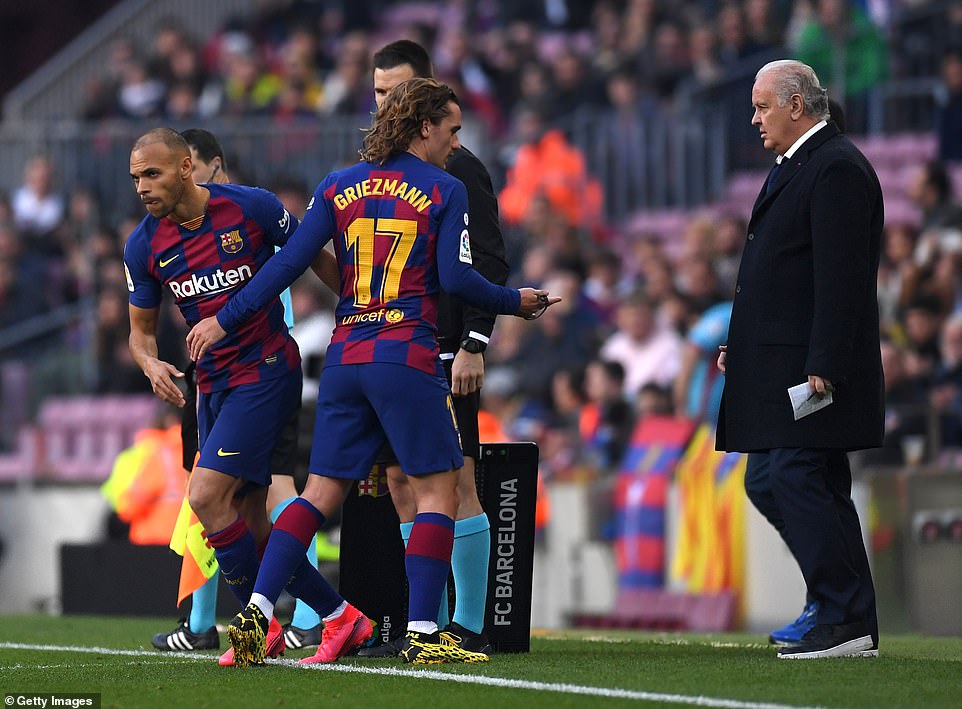 Martin Braithwaite did come on to make his Barcelona debut, replacing Griezmann as a second-half substitute 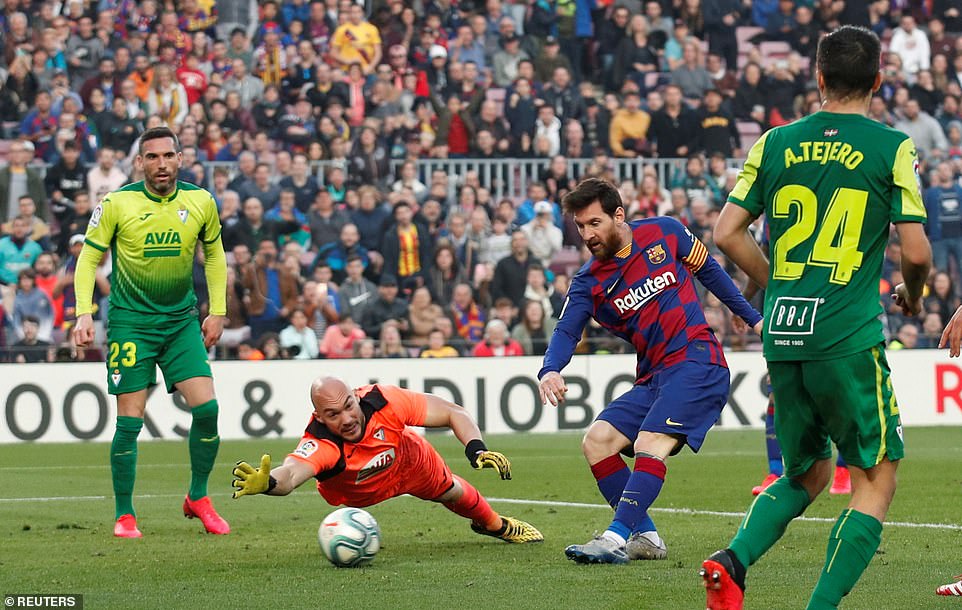 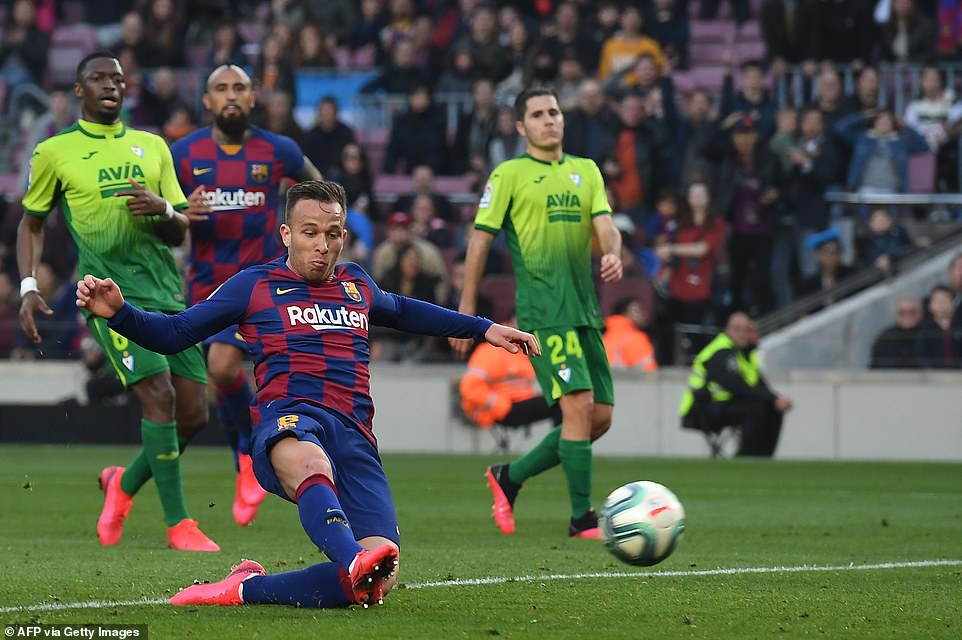