Manchester City defender Aymeric Laporte is worried that he could be out of action for a number of weeks, after his latest injury scare. The Frenchman limped off the pitch in the 33rd minute against Real Madrid on Wednesday night.

Guardiola was forced into replacing Laporte with Fernandinho during the Champions League tie.

While City still managed to win the game 2-1, giving them a healthy advantage ahead of the reverse fixture, fears remained over the extent of Laporte’s injury.

But, it’s now been revealed that Laporte could be sidelined for up to a month.

JUST IN: Theory revealed why Aguero did what he did after Man City beat Real Madrid 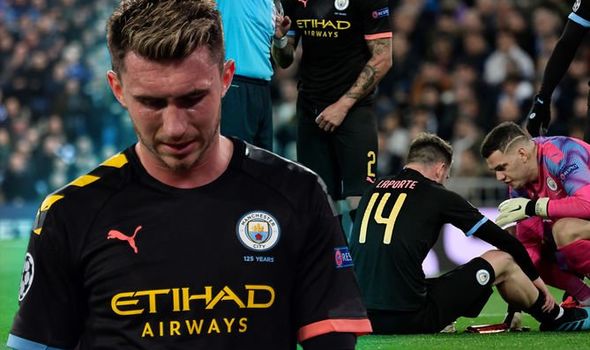 Laporte is now nailed on to miss a number of City’s key, season-defining fixtures.

But, he’s now also expected to miss the Manchester derby next week, on March 8, according to The Mirror.

Guardiola will likely be without Laporte for the second leg of the Champions League tie against Real Madrid, on March 17.

The defender is now in a race against time to get fit for City’s trip to Chelsea on March 21.

The Citizens’ next match will be against Liverpool, at the Etihad Stadium, on April 5.

Laporte’s latest setback has rounded off a season of injuries for City and Guardiola. 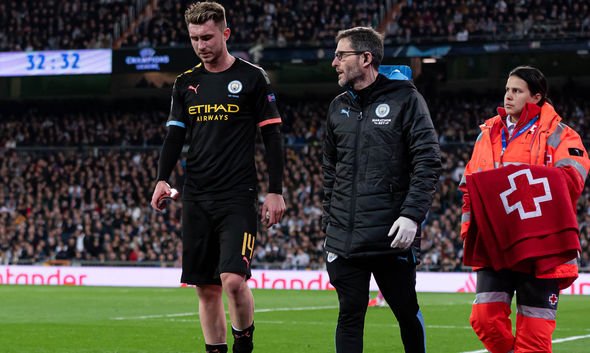 There have also been defensive absences to Stones and Otamendi, as well as left-backs Benjamin Mendy and Oleksandr Zinchenko.

Meanwhile, Laporte has already told fans that he was disappointed to leave the pitch during the Real Madrid match.

But, it was more important that the team came away with the win, which they eventually did.

After the match, Guardiola admitted that the team was desperate to keep Laporte fit. But, after a long spell out of the team, it was always a risk that he’d get injured again.

He was simply too important to leave out of the City starting XI against Real Madrid, in what was their most important match this season, so far.

“He’s injured,” said the City boss. “He’s had four or five months out, and it’s a problem when you come back. He came back in this demanding game, it’s a pity.

“We dreamed to be with him until the end [of the season]. Unfortunately, we’ve suffered a lot in this department. But, with John [Stones], with Nico [Otamendi] and Dinho [Fernandinho] we’ll go through.”