The Champions League round of 16 continues tonight with a mouthwatering clash between LaLiga leaders Atletico Madrid and Chelsea the focus of our coverage.

Follow Sportsmail’s runner for live Champions League coverage of of the night’s European action, including scoreline, lineups and updates.

The Atletico boss said: “We’ll be facing a team with a coach that has managed to get every side he has taken charge of to play attractive football.

“This season they’ve signed some excellent young players and since Tuchel has arrived they’ve improved their results a lot.

“But their squad speaks for itself, just look at the quality of their three goalkeepers, that proves their power, and their attacking players could get in any team in the world.”

The warm-ups are underway in Bucharest. Not long to go now… 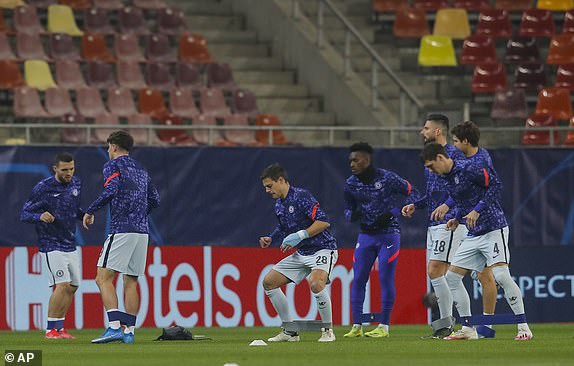 Despite Atletico Madrid’s drop in form of late, they still come into Tuesday’s Champions League clash as the favourites.

Unsurprisingly, La Liga’s joint-top scorer Luis Suarez is the favourite open the proceedings at 4/1, though he is tied with team-mate Moussa Dembele at the same price.

As for Chelsea, Tammy Abraham is the favourite to break the deadlock at 11/2.

Atletico Madrid were certainly drawn into a harder group than their counterparts, with Bayern Munich, RB Salzburg and Lokomotiv Moskow completing the four.

However, it was in attack where they struggled, scoring only seven goals throughout, with neither Luiz Suarez or Angel Correa netting once. That translated into draws – three of them, including a double against Lokomotiv Moscow and their home tie against Bayern Munich.

Their most notable fixture was not one to remember, however, as they were thrashed 4-0 away at Bayern in their group stage-opener.

Though Chelsea will have been delighted to win their Champions League group stage, they will have been less than pleased to find out their opponents as a result.

The group stages were negotiated entirely under the stewardship of Frank Lampard, before he was sacked at the end of January. The Blues remained unbeaten throughout the group stages, claiming four wins and two draws.

In truth, Chelsea were granted a relatively straightforward group, with Sevilla the only team of note, with the quartet completed by Rennes and FC Krasnodar.

Though drawing in their opening and final group stage fixtures – both in home games, the first to Sevilla and the second to Krasnodar – Chelsea sealed there progression in the mid-games. Their most notable performance came early in December, when Olivier Giroud scored all four goals as Chelsea beat Sevilla 4-0 away.

Diego Simeone makes three changes to the Atletico Madrid side that suffered a shock 2-0 defeat at home to Levante on Saturday as former Manc defender Stefan Savic, Saul Niguez and Thomas Lemar come in for Jose Gimenez, Geoffrey Kondogbia and Renan Lodi.

Luis Suarez, who has impressed since joining the club, starts up front. Lucas Torreira and Moussa Dembele are on the bench.

Callum Hudson-Odoi returns to the starting XI despite being taken off just 30 minutes after being brought on as a substitute at the weekend.

The Englishman is one of a number of changes with Andreas Christensen, Jorginho, Reece James and Olivier Giroud starting. Kurt Zouma, N’Golo Kante, Reece James and Tammy Abraham drop to the bench.

Team news to follow with both matches kicking off at 8pm.