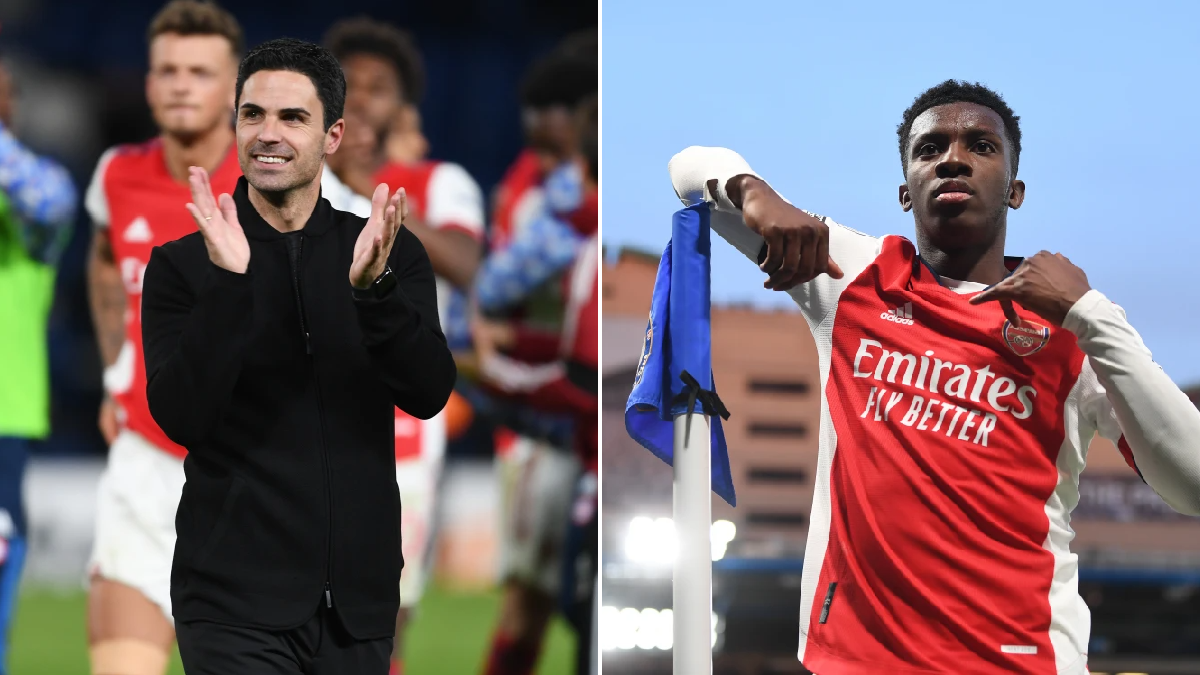 Mikel Arteta hailed the performance of Eddie Nketiah as his brace helped fire Arsenal to a crucial win over Chelsea.

The Gunners kept their hopes of a top-four finish alive with an impressive 4-2 win at Stamford Bridge as Nketiah’s brace, coupled with Emile Smith Rowe’s strike and Bukayo Saka’s penalty put them level on points with fourth-placed Tottenham.

Nketiah was handed a rare start with Alexandre Lacazette only fit enough for the bench while Mohamed Elneny and Rob Holding were also handed opportunities to impress with Arteta rewarding them for their efforts in training following a third successive defeat to Southampton last time out.

Discussing Nketiah, Arteta said: ‘When you look at him in training and how humble and hungry he is, good things happen to good people. If I’m happy for anyone it is especially him because I know what he has been through.

‘The same with Elneny and Rob Holding. That is why we won the game today.

‘I love the spirit of these players. When you lose matches you get criticised but for these players it is worth it. They are really growing.’

Arteta later went on to include Nicolas Pepe in his praise, with his attitude in training key to the club’s progress, despite being an unused substitute in the trip to Stamford Bridge.

‘It’s really simple. I said to you loads of times, the way they train,’ he added.

‘If you see the training session we had on Sunday after the defeat, if you see Mo Elneny, Rob, Nicolas Pepe, how they trained, I think it’s the reason why we won.

‘I said to them before the game, that to good people, good things happen and we have some really, really good people in that dressing room and that shows when they are not involved, not in the good moments.

‘They have performed today because of how they look after themselves and how much they care about the team.’

Arteta will be hoping for a similar level of performance when they host Manchester United on Saturday.