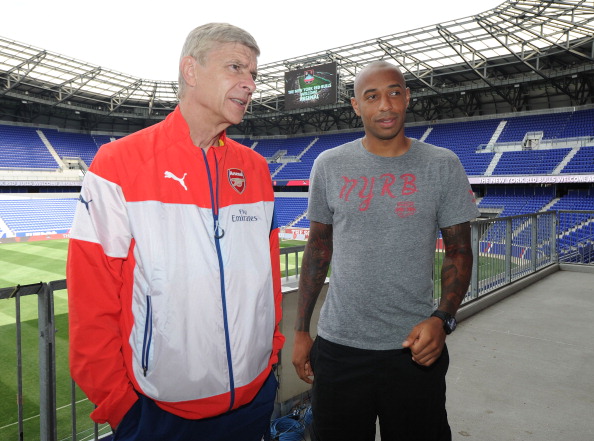 Arsene Wenger believes the Bournemouth job could be the perfect stepping stone for Thierry Henry to eventually make the step-up to Premier League management.

The Montreal Impact coach has been heavily linked with a move to the Cherries and reports earlier this evening went as far to claim that he had accepted the club’s offer to take charge on the south coast.

Henry had a haphazard stint at Monaco before joining the Impact in Canada but he’s keen to manage in England and has made no secret of his desire to manage Arsenal in the future.

Former team-mate Patrick Vieira has been linked with the role but Henry is the current favourite and Wenger says the job would be a ‘good test’ for either of his former players.

‘I knew a little bit that Patrick Vieira was in the frame but Thierry Henry – because he was in Montreal – I did not expect him to leave but it’s a good club Bournemouth,’ Wenger told BeIN Sports.

‘I think it’s a good test as well for somebody. They have good players, they work well. I think it’s a great platform for a young manager that he can do it in England and then to go to the Premier League.’

Asked if being a world class player offers any guarantee of becoming a top manager, Wenger said it helps but there’s no certainty.

‘You don’t know because basically all the players that play at the top they can be managers,’ said Wenger.

‘To play at the top top you need to understand football and then after it’s about dedication and whether you want to live this life or not you know. You don’t know that when you manage them’.