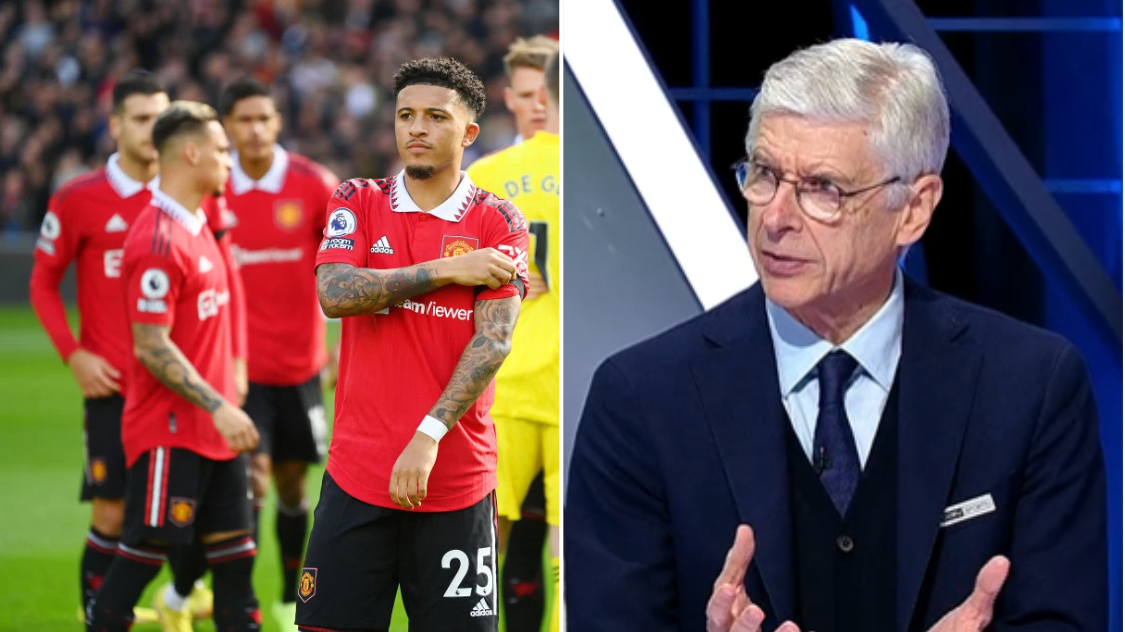 The Red Devils shipped four goals in the first half before Phil Foden and Erling Haaland both completed their hat-tricks in the second period – though the visitors never gave up and netted three goals themselves.

City were good value for their big half-time lead and Wenger felt the game was won on the flanks, criticising both Antony and Jadon Sancho for not doing more to help their struggling full-backs and often leaving them exposed.

‘What is for me unbelievable in the first half is that Man United has defended so badly on the flanks,’ said the former Arsenal manager on beIN Sports.

‘From the first minute on Diogo Dalot got a yellow card and Sancho and Antony did not contribute defensively.

‘They were, in the whole half, flooded on the flanks and they were always in trouble.

‘After that, when they had the ball, I felt they were obsessed by respecting too much the game plan.

‘They wanted always to go too quickly forward and lost so many balls and didn’t have enough possession.

‘They didn’t play for possession, they wanted just to get on the counter-attack.’

Offering one saving grace for United in the first half, Wenger was keen to point out that Raphael Varane – United’s tallest defender – was not on the pitch when Haaland netted City’s second goal, which effectively opened the floodgates.

The Frenchman picked up an injury after appearing to twist his ankle and was not allowed back on the pitch before the home side took their corner, leaving Christian Eriksen trying to mark Haaland – which did not end well.

Wenger explained: ‘The only positive circumstances I must give them is that they conceded the second goal when Varane was [off the pitch]. And when I saw that Eriksen was marking Haaland you worried for man United.’