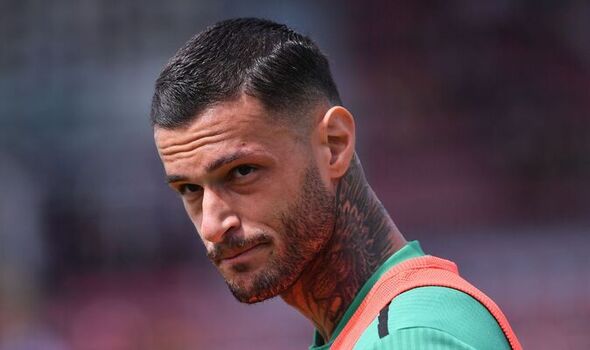 Arsenal are facing stern competition for Sassuolo striker Gianluca Scamacca from Paris Saint-Germain after the French champions reportedly tabled an offer of £30million. The Italian international is believed to be one of the names on the Gunners’ shortlist and there was even some suggestion that Arsenal had bid for the 23-year-old.

He hit 16 goals in 36 Serie A outings this season for Sassuolo to firmly put his name in the shop window.

Scamacca is now widely recognised as one of the best young strikers in Italy and a move could be on the agenda before the start of next season.

Arsenal remain focused on landing Gabriel Jesus from Manchester City but should they face difficulty signing the Brazilian, Scamacca is one of the alternative targets in their sights.

However, according to Gianluca Di Marzio, PSG have now offered £30m plus add-ons for the striker as they continue to negotiate with Sassuolo.

The Italian club are looking for closer to £45m in order to agree to a sale before the start of the 2022/23 campaign.

That’s the same kind of figure it will cost Arsenal to land Jesus, although the Gunners are yet to firm up their interest in the three-time Premier League winner.

He’s a physical striker who can score all kinds of goals – both in the box and from distance.

Frosinone chairman Guido Angelozzi, who was previously on the board at Sassuolo, believes Scamacca is as good as former Arsenal target Dusan Vlahovic.

“I took him to Sassuolo when he was just a kid. For me he is a top striker, he is no less than Vlahovic,” he said.

“He scored 16 goals in a short time; there are no such strikers in Europe.

“He already did it once (left Italy), going to Holland when he was very young, then we were good at Sassuolo in bringing him back to Italy. Who will be better will take him away again.

“Surely it will cost a lot. He will be the future centre-forward of the national team.”

Arsenal were in the hunt for Vlahovic in January but the Serbian’s agent did not even pick up the phone to the Gunners.

The Juventus striker has now explained his decision to join the Bianconeri over a move to the Premier League.

“Maybe my agent knows [about Arsenal’s offer] but I never talked to anyone about it,” Vlahovic told The Telegraph.

“I just had one club in my mind because Juventus is Juventus. There is nothing else to say. And now I feel honoured to be given this jersey. It’s incredible every time I put it on.”