Arsenal legend Paul Merson has told all on how he expects Gabriel Martinelli to go on and make a huge impression this season. The Brazilian is well-loved by Gunners fans, who became more central to Mikel Arteta’s plans last season.

Arsenal star Martinelli has been told he has enormous potential and could go on to become a major star next season at the club.

The Gunners have been splashing the cash this summer and have already brought in a number of players including Gabriel Jesus, Marquinhos, Fabio Vieira and Matt Turner. Oleksandr Zinchenko is on the brink of joining as well from Manchester City in a further boost to the club.

And while Arteta is busy building his squad, he might already have one ace in the hole in the form of Martinelli. The Brazilian forced his way into the Arsenal manager’s plans last year when he made 36 appearances in all competitions. 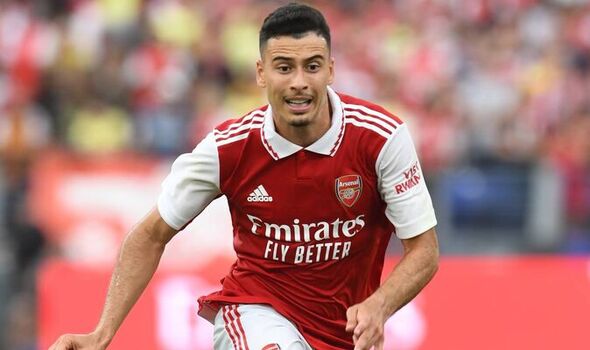 The next step will be to start making more of an impact in front of goal having scored six goals last season. One avid fan of Martinelli’s is Merson, who reckons he is ready to make that forward leap next year.

He wrote in the Daily Star: “Gabriel Martinelli needs to take a big leap forward this season because his potential is enormous.

“For me, he gets great reviews, but it’s never for the whole game. He plays in flashes. I remember seeing him against Liverpool last season in the cup and for 15 minutes he gave Trent Alexander-Arnold the absolute runaround.

“But I don’t think he really touched the ball after that. He has moments in games and you’ve got to have more than moments if you want to reach the top. He has to keep wanting and demanding the ball all the time. He’s got so much talent. He needs to use it more consistently.

“He needs a run in the team. He might argue he doesn’t get enough time on the pitch, that he’s one of the first to get subbed if a game goes badly. I think he needs a run of ten or 11 starts in a row where he can really bed down and feel settled and important.

“Arsenal have bundles of talent in attacking areas. They have Saka and Emile Smith Rowe, Gabriel Jesus has come in, Martin Odegaard is in there.

“The one thing is that Martinelli has been at Arsenal for a few years now and nobody is sure what his best position is. But I think it’s between Martinelli and Smith Rowe for that spot on the left. If he takes up the challenge, he could really develop into a top player.”