Arsenal legendary captain Tony Adams would not have allowed Matteo Guendouzi to behave like he has which led to him being dropped against Southampton, according to former Liverpool captain Jamie Redknapp. Guendouzi was not part of the 20-man squad for Arsenal’s trip to Southampton on Thursday. Head coach Mikel Arteta claimed it was an “internal issue” that he was not prepared to discuss further.

Guendouzi has been criticised by Brighton players since the 2-1 loss to the Seagulls on Saturday.

The 21-year-old is claimed to have boasted about how much he earns compared to the Brighton squad during the match.

It is the second time Guendouzi has been dropped for disciplinary reasons since Arteta became boss in December.

The Frenchman was left out of the squad for the win over Newcastle in February following an incident in the mid-season training camp in Dubai. 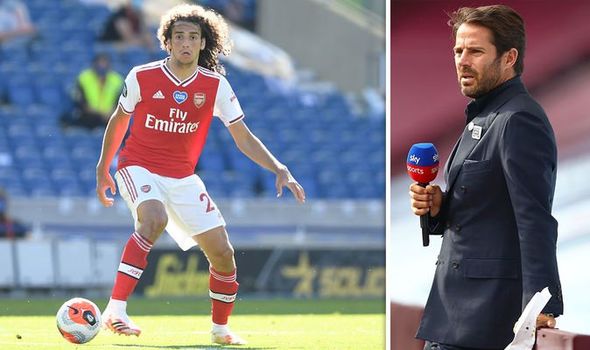 Redknapp says it shows there is a problem at Arsenal that Guendouzi has been allowed to fall foul of discipline on more than one occasion.

“He can definitely play, make no mistake about it. He’s got talent,” Redknapp said on Sky Sports.

“Yeah possibly [the question is around his temperament]. He acts like he’s a big player and he’s not yet.

“You’ve got to earn the right to be a big player.

“I remember the game last year at Southampton and Tony Adams was on and we did some analysis about him as a midfield player, not tracking runners, not working hard enough.

“I don’t like the messages that I hear about him, there’s been a couple of times Mikel Arteta has had to leave him out of the squad – at 21 years of age because you’re not doing things correctly, that shouldn’t be happening.

“That suggests there is something wrong at the club when that keeps happening.

“Imagine a young man behaving like that with the likes of Tony and Thierry Henry – it wouldn’t have happened.”

Ahead of the match against Southampton, Arteta explained Guendouzi’s absence.

“Whatever internal issue we have, we deal with it privately.

“The needs of the team and football club are always the same, put the best players on the pitch that are 100 per cent focused to win the game.”