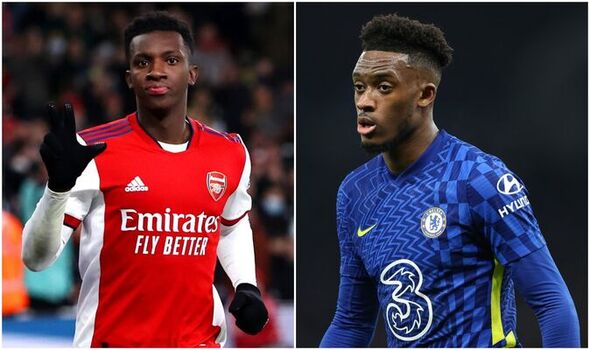 Arsenal striker Eddie Nketiah and Chelsea ace Callum Hudson-Odoi have been ‘persuaded’ to snub England and switch their international allegiance to Ghana, according to reports. Nketiah and Hudson-Odoi have both been key players for the Three Lions at youth level but seem set to snub the senior team.

Nketiah is the England U21s highest ever scorer, notching 16 goals in 17 appearances. His recent form with Arsenal might even have tempted Southgate to have a longer look at the 22-year-old.

Hudson-Odoi has even featured for England at first-team level. He made three appearances in 2019 but a lack of game time with Chelsea has seen other players move ahead of him in Southgate’s thinking.

The 21-year-old has turned down several call-ups to the U21 squad over the last year, although he has argued that it is in a bid to improve his chances of playing more under Blues boss Thomas Tuchel. But there remained the possibility that he would switch to Ghana, for whom he will be able to play at the 2022 World Cup.

According to Football.London, Hudson-Odoi and Nketiah have now decided to play for the African nation. Both were born in South London but are eligible to play for Ghana through family connections.

There was some confusion over whether Hudson-Odoi would be able to switch allegiance having played in a competitive game for England. FIFA rules generally state that a player cannot change nations if they have played in a World Cup, European Championship, or other organised game.

Hudson-Odoi – an U17 World Cup winner – played 169 minutes for the Three Lions during their successful Euro 2020 qualifying campaign. He did not make the 25-man squad for the finals, which were held last summer.

However, FIFA rules state that exceptions are made to players who have featured three or fewer times before the age of 21. All of Hudson-Odoi’s appearances came aged 18 and 19.

The 21-year-old snubbed England U21 call-ups in August, October and November last year. Three Lions boss Southgate provided no assurances over his international future despite links to Ghana: “I’m trying to respect a squad that got us to a final [of Euro 2020], not make too many changes to that. And make sure young players really have to earn their right to come in.”

He then appeared to aim a dig at Hudson-Odoi when former Chelsea team-mate Conor Gallagher was promoted from the U21 squad last November. The 51-year-old suggested it was easier to pluck players when they are at St. George’s Park.

Talking about Gallagher, Southgate said: “I suppose it’s one of the benefits of being with the under-21s. It was an easy transition for us to bring him across, already covid tested and going from one bubble to the other was straightforward.”

Meanwhile, Nketiah’s snub will come as a blow to England, despite their vast strength in the striker position. The former Chelsea academy prospect has scored four goals in his last four matches having finally been given games by Arsenal boss Mikel Arteta.

The news comes amid England losing incoming Liverpool midfielder Fabio Carvalho to Portugal. The Fulham teenager represented the Three Lions from U16 to U18 level but last month accepted a Portugal U21 call-up.