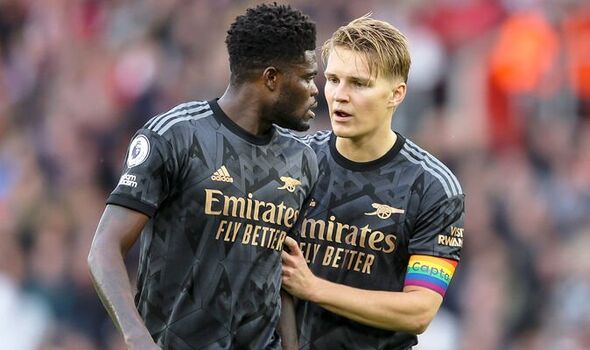 Thomas Partey has struggled with injury problems throughout his spell at Arsenal so far. But a fresh issue has arisen in his last two Premier League outings, culminating in the Gunners throwing away a lead at Southampton on Sunday.

Partey is without a doubt one of the most important players in Mikel Arteta’s squad. Without him, Arsenal fail to win a lot more than when he is available.

However, there has been a clear drop-off from the Ghana star in the second half of the last two league matches. On Sunday against Southampton, his performance after half-time was nowhere near the level he reached in the first 45 minutes at St Mary’s.

If Arsenal are to challenge near the top of the table this season, they need their big players to stand up and perform when it gets tough away from home. But a look at the stats from the weekend shows a worrying sign for Arteta.

The Gunners dominated large parts of the first half and Partey had more touches (58) than any other player on the pitch, according to Whoscored.com. He attempted 50 passes with an accuracy of 90 per cent and had almost 10 per cent of the possession in the whole first half, both again more than anyone else.

However, it all changed in the second half. Arsenal lost control of the match, especially in midfield.

Partey had just 34 touches in the second half, just the fifth-most, and attempted just 27 passes – almost half he tried in the first period. He was unable to make any tackles or interceptions in a game where Arsenal were trying to protect a lead – not a good sign from a defensive midfielder.

Partey was not the only Arsenal player to drop off in the second half but the stats back up what a lot of the fans were thinking. It would be unfair to base the criticism on just one performance.

DON’T MISS
Man Utd already have a player who wants Ronaldo’s No 7 shirt
Man Utd have another Beckham, Ronaldo and Van Nistelrooy
Man Utd owners the Glazers are ready to take the biggest transfer gamble

WIN A FREE ENGLAND SHIRT FOR THE WORLD CUP!

But a quick glance of the stats from the 1-0 win over Leeds the previous weekend shows a similar story. Partey struggled to get the ball at Elland Road after half-time.

He had the fifth-most touches in the first half but was only joint-11th on that particular stat after the break. His pass succession was slightly down when he did get the ball and he was unable to make any tackles, compared to two in the first 45.

It was a different scenario when Arsenal were at home to Liverpool earlier this month. Partey actually got better in the second half in most facets and was one of the Gunners’ star performers.

But Arsenal need the 29-year-old to do that away from home as well. Wins at the Emirates will often take care of themselves but as shown on Sunday, Arsenal will not be given an easy ride on enemy territory and they cannot afford a player in such an important position to drop off so dramatically in the second half of matches.